As a Proud Canadian, I Join the Protest Against Proroguing Parliment 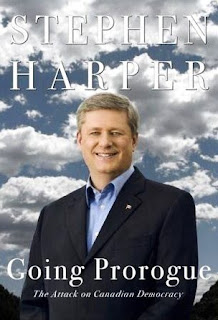 On January 23, 2010 Canadians all across this vast land of ours join in protesting our prime minister's second shut-down of parliament in a 12-month period.

"Twice within one year, the prime minister takes this extraordinary step to muzzle Parliament. This time it’s a coverup of what the Conservatives knew, and when they knew it, about torture in Afghanistan. So their solution is not to answer the questions but, rather, to padlock Parliament and shut down democracy." - Liberal House Leader Ralph Goodale 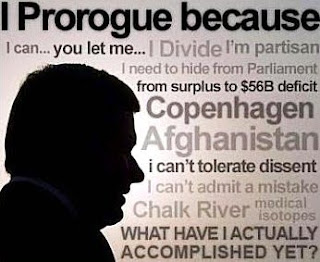 "The Harper government's decision to have Parliament prorogued in the dead of Christmas week sets a record for taking out the trash.

That's the political term for a government dumping unwelcome or unpopular announcements at times when the news is likely to be ignored. Embarrassed by a damning report? Release it on a Friday afternoon before a long weekend.

Determined to short-circuit an investigation into how the government mishandled the treatment of Afghan detainees? Wait until the eve of New Year's Eve – when MPs are in their ridings or down south, readers and viewers are few, and that day's news is dominated by the picks for the men's Olympic hockey team – and suspend Parliament." - John Ibbitson, The Globe and Mail 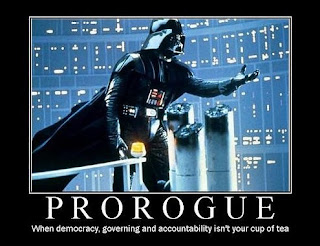 "(Harper's) counting on our apathy to carry him through this and the glow of the Olympics to bolster his appeal." - Christopher White, creator of Canadians Against Proroguing Parliament

Not Just the News

Janet says Here, here! I am proud to stand beside you, Julia.

Here, here! I am proud to stand beside you, Julia.