Last week was the first time I didn't post a poem since I started riding the Poetry Train on May 14th, 2007.

It felt weird. But I decided to leave up my protest against Stephen Harper instead, since there was a national initiative to introduce the prime minister to actual ordinary Canadians, rather than the ones he thinks populate this country.

I had intended to give a new-to-me poetry form a try, so a week later, here is my first American sentence. 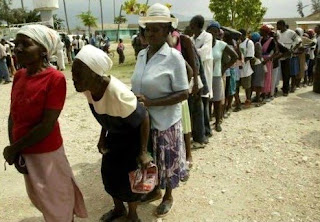 Jockey for spot at frigid gas pump not like fight for rice in Haiti.

For a trip down memory lane, here's my first-ever post for the Poetry Train: The Artisans

Photo from Monsters and Critics

Yousei Hime says I love things that make me think.

I am not a poet, nor a big reader of poetry (although I dabble at times and love to read them when I come across them) - American Sentence? Is this new? A recognized form of poetry? I'm off to scour the net looking for information :)

I agree, very compelling. I love things that make me think. Thank you for your wonderful post, beginning to end.

I'm back and trying to catch up.

Yeah, when my toes and fingers started to get cold while sledding over the weekend, I had to remind myself how lucky I was... I didn't just have a cabin to go into to warm up, I had a ladies-only cabin!

Its great to see how the whispers from Haiti greet our every day lives and then, show up in poetry.

Brava for trying a new form!

Phew, and you've tackled a topical message here with the Haiti disaster, it brings us down to earth when you compare it to the gas station queue.

Thanks for posting this!

I've never heard of this before. What an excellent way to practice economy.

Not just any sentence, but a sentence of 17 syllables that contains a full meaning. I like it. This is as challenging as a 6 word story.

Thanks everyone! I have a feeling this American sentence will not be my last.