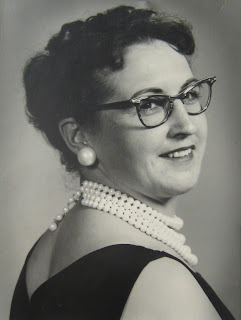 1 - Last Thursday my sister and I boarded a plane to fly to Michigan. Although my sister and her husband had just been in Michigan only a few weeks before, she was headed back again. Her strong urge to schedule their vacation for May and to drive there to see our 90-year-old grandmother Viola gave them a last chance to see each other before Grandma's life came to an unexpected close. 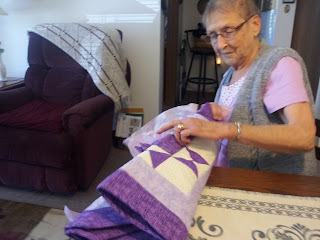 2 - This is the quilted runner that my sister made for Grandma, using her favorite color -- purple. Grandma was a talented quilter. The purple quilt which she made for my wedding is one of my most prized possessions.

Grandma had not been ill, merely elderly. No one was expecting her to pass away, although my sister's urge to get to Michigan was, in hindsight, an important one. 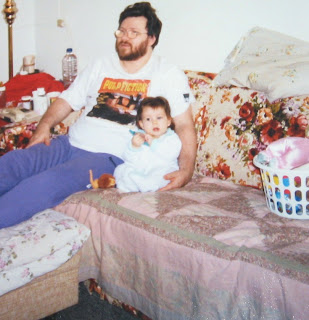 3 - This is a shot of the wedding quilt Grandma made for me. It wasn't a stored-away kind of quilt. We used it every day. This was taken when I lived in Toronto in the late 90s, and shows my husband Brad with our little cousin Emily. 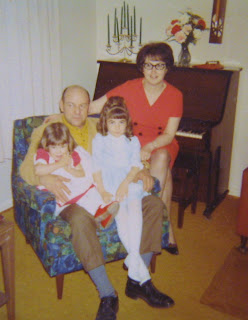 4 - This was taken at a Phillips family dinner in Michigan, where I lived until I was six. I'm the older sister in blue. Grandma was the originator of what is now known as Phillips rice, my most favorite food in all the world. It was served at every Phillips dinner, and is now made by all of the  granddaughters -- even by me, the non-cook.

It's fairly simple: just cook the rice in chicken or turkey broth instead of plain water, with a bit of butter if needed, and a few blobs of ketchup, and a bit of black pepper. Mmm, mmm, mmm. Grandma got this recipe from an old Armenian neighbor of theirs. 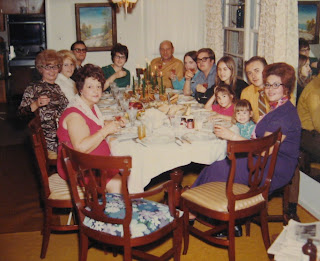 5 - I believe this was a Thanksgiving dinner, 1970-ish, at Grandma and Grandpa Phillips'. Pictured from left: my Grandma Doucet (my mom's mother), a family friend whose name escapes me, my Aunt Suzie (Dad's sister) and Uncle Raymond, Grandma Phillips, Grandpa Phillips, Aunt Denise and Uncle Maurice (Dad's brother), Aunt Loretta (Dad's sister), little me, my dad, little Michelle (my sister) and my mom. My Grandpa Doucet (Mom's father) was a photographer and likely took this picture. He definitely took the black-and-white portrait at the top of the blog. 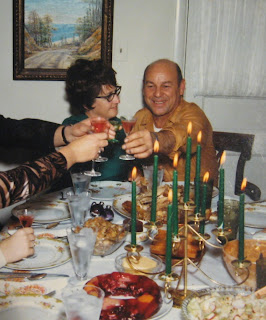 6 - Cheers! My grandparents came from Quebec to Michigan in the 50s for work, and like immigrants everywhere, all of the French Canadians found one another in their new anglophone American life. That's how my two families -- my dad's side and my mom's side -- came to be friends with one another before my parents even began dating. 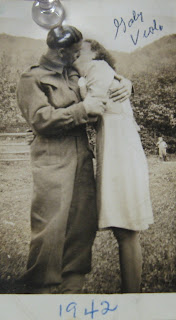 7 - Here's a great shot of two sweethearts in Canada, 1942. Gaby and Vi, starting a life together. 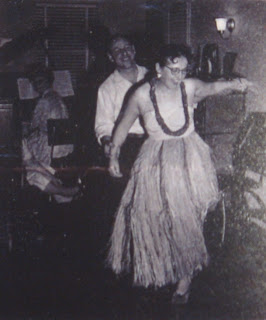 8 - Did I mention that my silliness factor always rates in the higher percentile? Quite obviously, inherited. 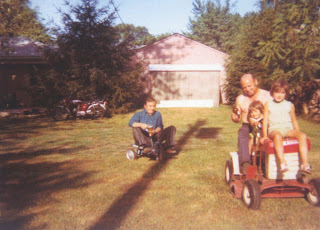 9 - Here my dad is sneaking up on us in my grandparents' backyard. Silly. 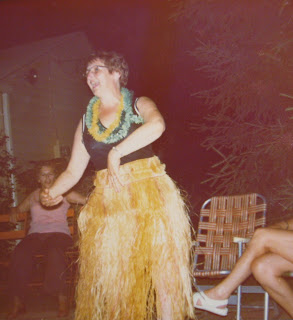 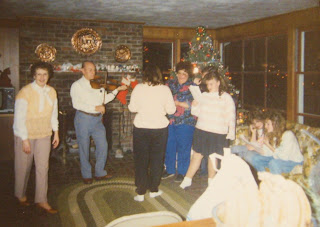 11 - This was a Christmas celebration with the Phillips' after many years celebrating with the Doucet side in Nova Scotia, Canada. My parents had moved back to Michigan for a year in the late 80s. I've got my back to the camera as we sang carols together. 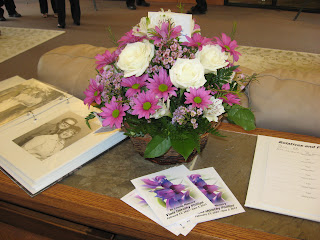 12 - These are the flowers we brought to the church, celebrating her life and saying farewell at her funeral mass last Saturday.

Six years ago, only a month after I began my blog -- the imminent passing of my dad encouraged me to put waiting aside and seize the day -- Grandma Phillips, my Aunt Loretta and my cousins Shelly and Jenny hopped in Shelly's van and raced out here to spend my dad's last days together. Grandma, my step-mom Doris, my Aunt Loretta, my sister and I were all present when my dad passed away. I'll always remember how my grandma laid her hand on dad and said, "I was with you on your first day, and now I'm with you on your last." Then she led us all in a recitation of the Hail Mary. 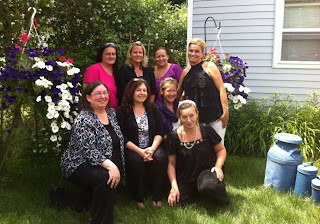 13 - My sister somehow knew Grandma's time on this earth was winding down. She got to Gram only hours before she had a massive stroke and began her passing away.

It was a bittersweet joy to reunite with my aunt and my cousins for my grandma's funeral. My thanks go out to them for their trip here six years ago.

Front row, L to R: oldest sibling Norman's daughters, myself and Michelle / the last member of her immediate family, my Aunt Loretta, and her daughter Tammy

Posted by Julia Phillips Smith at 1:02 AM

Julia, I'm so sorry for your loss! What fantastic pictures you have of her. My thoughts are with you!

Your grandma sounds like a fun and interesting woman who will be missed. Thanks for sharing pictures and descriptions of her life.

Just know that she will always be there. Not just in memories but when you need her.
So glad to see in your post her loving family.

I still have one grandfather left - my mom's dad. I call him every so often, just to hear him say, "Well hello there my boy".

I'll miss that when he's gone.