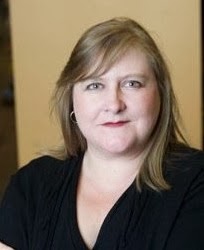 It's a great pleasure to have multi-genre author Sherri Browning Erwin here at A Piece of My Mind for the second in this year's Spooky Stories Author series, running all month on Thursdays.

Every place is Down Home once you get to Canada's east coast -- so come right in, Sherri. It's really cooling off out there, all of a sudden.

Just kick aside those little mounds of leaves collecting on the front steps. Today's a perfect day to chat about your two horror mash-ups, Jane Slayre and Grave Expectations.

1 – How did you first get involved with the classic horror mash-up series?

The idea for Jane Slayre came about when I was joking around with friends.

I shared a blog, the Whine Sisters, with Kathleen Givens and Julia London (and many other authors, but it was just Kathleen and Julia with me at that point), and I wrote a blog that was a book blurb spoofing the Pride and Prejudice and Zombies book based on Jane Eyre, called Jane Slayre.

Kathleen called me and said, “Get that off the blog! Someone will steal your idea. You need to write that book!” At first, I thought, no way, it was only a joke. But then I realized that I could really do it and it might actually sell.

I took her advice and it all worked out. I meant it to be a one time thing, but my publisher asked me to do a second, Grave Expectations, based on the popularity of Jane Slayre. 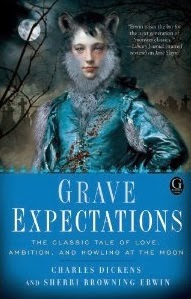 2 – Has your collaboration with Charlotte Bronte and Charles Dickens influenced your own writing style?

What do you think they would have learned from you?

From me, they might have learned to edit more as well, to write tighter. Modern readers prefer a faster-paced story and don’t often take time to stop and admire a well-constructed sentence.

3 – Some writers might have become blocked when asked to merge their own writing with that of two authors who have scholars and university courses devoted to their works. Did that rear its head at all for you?

The process was often daunting. I would worry about changing key elements and adding in my own. How dare I suggest changes to such esteemed works?

Did you embrace this chance to take these two stories down whole new pathways?

I would remind myself that it was all in fun, and that the originals would stand beloved for many hundreds of years to come. Now it’s very exciting when high school teachers and college professors contact me on occasion to tell me that they are teaching my versions with the originals in courses dealing with adaptation or parody.

4 – Clothing designer Lizzie Norris chose your Jane Slayer world as a springboard for her graduation project. How did that come about?

I found out about Lizzie by accident, when I was looking up Jane Slayre on Twitter to see if anyone was still buzzing about the book. Lizzie apparently read Jane Slayre and felt inspired to take on the project of creating costumes for the characters.

How did it feel to see her interpretation of your characters?

When I found her blog and saw her work, I was blown away. She did such an incredible job of bringing the characters to life. It was quite a thrill and an honor to see her costumes and realize that I’d provided inspiration to a clearly very talented designer.

The editor of the anthologies, Trish Telep, read my paranormal romance To Hell with Love and felt I would be a good addition to her Vampire Romance anthology. She wrote and asked if I could do a vampire story for her. And then she asked me for a story for one of her follow up anthologies, paranormal romance. I was pleased to be included, and it was a great chance to stretch my imagination and write something different for me at the time (vampires).

Do you naturally gravitate towards shorter fiction? (My husband is a big fan of horror and fantasy anthologies.)

Writing short fiction is quite a challenge for me, actually. The pacing is completely different and it takes some adjustment from my normal instincts to write full length novels.
6 – You’ve written in the historical romance / historical paranormal / contemporary paranormal genres. Is it difficult to switch hats?

I have so many ideas in all different areas of fiction. It’s difficult for me to pick one genre and stick with it.

I read all kinds of things, and then I’m inspired to write something new and different from what I’ve done previously. Picking one genre and sticking with it is much more challenging for me.

7 – When writing spooky material, do you ever give yourself shivers?

I have made myself laugh, cry, cheer, jeer, and have scared the jeepers out of myself. I always think it’s a good sign. If I have a reaction when I write, it seems more likely that my readers might feel it when they read. At least, I hope so.

8 – As a reader or a TV and film viewer, do you prefer spooky/scary, or do you delve further into horror? How far do you go as a writer?

I love psychological thrillers best of all. The idea that the scariest things might be in our own heads, or someone playing with our minds, that scares me more than a physical threat, for some reason.  I’m not sure I’m quite skilled enough to write a really good psychological thriller, though.

9 – If you could visit three hair-raising destinations, where would you go? Or perhaps you’ve already sampled a few…?

I would love to tour some old haunted castles.

I’ve visited dorms that were supposedly haunted on Mount Holyoke’s campus back when I was in school. Currently my daughter lives in a dorm that is supposedly haunted by a man-hating ghost, and I’ve warned her boyfriend and my son, who attends the same school, but no sign of ghosts yet.

10 – If you had to name your top three supernatural creatures, what would they be?

As far as ghosts, what would keep a soul here? What’s the backstory? So many possibilities.

Witches are also intriguing. The idea of casting a spell appeals, but the potential of any harm coming back to me turns me off of trying any spells.

With vampires, immortality might be a gift, but is it worth preying on others? All three inspire my imagination.

11 – Have you explored these character types in your fiction so far?

I’ve explored vampires, but I’m not done with them yet. So much more to explore.

I’ve never written ghosts or witches, but both fascinate me.

For now, I’m taking a break from thrillers and horror stories to return to my first love, historical romance. If you love Downton Abbey, you might like my Edwardian romance, Thornbrook Park, coming out in June 2014. But I’m also itching to expand the series I started in Fade to Black, my short story for the Mammoth Book of Vampire Romance.

13 – Thanks for dropping by today, Sherri!

CLICK HERE to read an excerpt from Jane Slayre 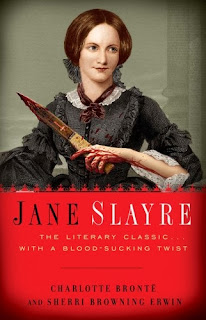 "If [Seth] Grahame-Smith can be said to have kicked the whole [mash-up] thing off [with Pride and Prejudice and Zombies,] the benchmark has been set with Jane Slayre...Not only is [Erwin] an accomplished writer, but she demonstrates a good appreciation of Bronte's novel, a mastery of its language and its aesthetic...I would recommend Sherri Browning Erwin's Jane Slayre as a great way to enjoy the best the genre currently has on offer." -- Gerard Wood, Science Fiction World

"I am a sucker for dark and gloomy novels, so one would think I adore Dickens, but oddly enough I do not. I do not actively dislike Dickens, I just find him difficult to read. So thank goodness for Sherri Browning Erwin. Her gothic revision of Great Expectations made me love this story. Once again, she proves that literary mash-up genre can be something magical when done correctly; sadly, few authors are as adept at the genre as she." -- Tiffany's Bookshelf

Posted by Julia Phillips Smith at 12:00 AM

I honestly hadn't heard of these books, but now I'm somewhat intrigued. I'll have to check them out. :)