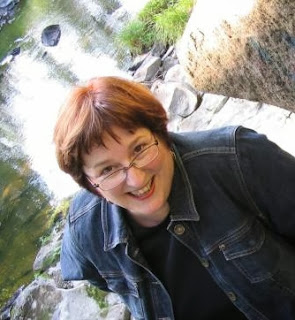 It's my great pleasure to welcome fellow Maritimer Norah Wilson to A Piece of My Mind.

Norah's visit wraps up this year's Spooky Stories Author Series. Be sure to check back next October when I ask a whole new crew of writers about what sends chills down their spines...

1 – Norah, your Casters series is a writing team effort with Heather Doherty. How did your partnership start?

Heather told me a number of times about this idea she had for a young adult novel. I’m a little slow on the uptake, but finally, I said, “Hey, we should write it together!” That project was The Summoning, the first book in our Gatekeepers series, for which we’ve plotted seven books. We never did get to write them, since at the time we were submitting to New York publishing houses, and you always have to be moving on to the next idea until something sells. 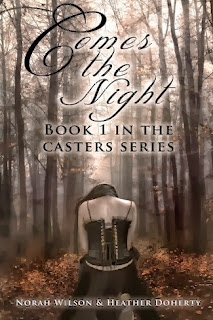 But when we wrote the first book in the Casters world, we knew we had to stick with it until we got all four books out. We haven’t looked back since. In addition to other YA paranormal, we’ve gone on to jointly write a launch book for Kindle Worlds (in the Pretty Little Liars universe), and some seriously funny cozy mystery.

2 – Tell us about your latest release, Enter the Night.

In Comes the Night, our girls (Alex, Brooke and Maryanne) learned to escape their troubles—and their actual bodies—by casting a dark piece of themselves out into the night.

We explore that further in Enter the Night, which is essentially Maryanne’s book. (Comes the Night was Alex’s book, and Embrace the Night will be Brooke’s. The final book, Forever the Night, will provide resolution for all of them.) Maryanne, who is by far the most wholesome of the three, nevertheless has a very dark secret, one that is tearing her apart. So when she takes up with Bryce Walker, son of the famed (or infamous) “Heller” hunter Ira Walker, we’re left to sort out how deeply rooted that attraction is in self-destruction. And if it’s self-destruction she wants, she just might get it.

When Heather (who is crazy intuitive) first got a ‘flash vision’ of the Casters, she started flipping emails to me as the ideas rushed in. Days later, as we were fleshing out the story in a quiet cottage at a nearby lake, we did succeed in scaring ourselves. A lot!

It was isolated and dark out there on the lake’s edge, and by the time we went to bed, I was afraid to look out the window in case I saw a Caster!

But normally, I don’t usually scare myself while I’m writing this stuff. Unless I’m home alone at night and there’s a branch knocking against the window and my dog starts growling low in her throat… In which case, I’d probably be scared no matter what I was writing!

4 – Did you watch spooky TV shows or films when you were young?

What were your favorites from those?

5 – As a reader or as a viewer, do you prefer spooky/scary, or do you delve further into horror?

I think I like spooky/scary better than flat-out horror. You won’t catch me at the movie theatre, or even in front of the TV, for Friday the 13th or Saw or the classic horror gore-fests. I don’t mind some violence, but I don’t want to be completely traumatized.

I'm more for spooky myself, although I totally get into the sword swinging of Vikings and Spartacus. That can get pretty gory.

6 – If you had to name your top three supernatural creatures, what would they be?

I do love my vampires.

I’m kind of picky about my shifters, but I do love dragons!

And demons. I do love a demon done well. Or a Djinn!

7 – Have you explored these character types in your fiction so far?

I’ve written vampires for the adult paranormal romance market, and Heather and I have written demons in the Gatekeepers story (The Summoning).Given time, we’ll probably get around to some more. Or we’ll just create a new one, like our Casters or our Fleshers (yes, they are just as scary/creepy as they sound!).

8 – Are there some earthbound, everyday aspects of life that you find scary?

Honestly, the scariest thing I know of is human greed and corporate pillaging. The wars that have been started over it, the people who’ve died for it, our ecosystem poisoned over it, species killed, our own health eroded. Way scarier than a zombie apocalypse.

9 – Where is the spookiest place you’ve ever been?

A taxicab in Boston.

What made it so scary?

No seatbelts, and a maniac for a driver.

LOL. But seriously? I think any place is spooky in the dark. My imagination just goes crazy. I once watched the movie Alien late at night by myself. That short trip from the living room down the hall to my bedroom was the perhaps the scariest one of my life.

I think it’s largely the younger crowd who enjoys being scared. The older we get, the more saturated we become with all the “real life” scary stuff we’re bombarded with in the news. But I think lots of younger adults seek out those scary thrills because they don’t have occasion to experience them in their normal lives. It’s a safe way to live through a really intense, cathartic experience.

11 – You began your publishing adventures as a romantic suspense author. How hard is it to switch gears between genres?

I still write romantic suspense, and yes, it’s a big shift in mindset when I switch over from one to the other. I don’t find it particularly difficult, once I get going. You just fall into the right “voice”. But it can be a little tricky when I come to a romantic interlude. We write toward the upper end of the YA market, so the stories might not be squeaky “clean” (I hate that word, because it suggests anything sexual is dirty), but neither are they remotely like an adult romance. I just have to be extra careful to make sure the voice and the emotions stay true to our teenagers.

12 – Do you use your suspense skills when you switch over to paranormal stories, or is that sense of suspense just a part of your writing voice?

I think suspense is just part of my writing voice. I’ve often said that my adult paranormals are just romantic suspense with vampires. I write them exactly the same way!

But truthfully, I have to give Heather all the credit for injecting the suspense into our YA stories. She has such an innate sense of story structure that I rarely feel the need to interfere with her plotting magic. At first, when there’d be a dramatic development or complication or something happened to drastically increase the stakes, I’d be a little, “Okay, are we over-promising here? How are we going to get our characters out of this corner we’re painting them into?” But she’d be all, “No, really, it’ll work.” And it always does, because she is the plotting queen.

13 – This has been so much fun, Norah -- thanks for dropping by. Could you tell us a bit about this excerpt from Enter the Night?

Happy to oblige! This one takes place when the girls come back to Harvell House after the Christmas break.

On their first cast out, they revisit some old haunts and find themselves out at the Walker farm. Bryce Walker is working in a lighted shed beside the barn, and Maryanne wants a closer look. The other girls try to talk her out of it, without success. 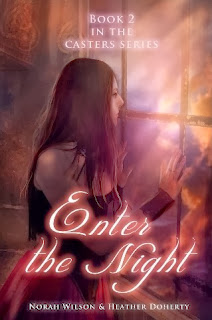 “It’s too dangerous!” Alex protested, but Maryanne ignored her. A quick look wouldn’t hurt anything.

Reaching the window, she hovered in front of it, peering in. Bryce Walker stood with his back to her, his tall frame stooping over an old fashioned workbench. With two portable hanging lights shining down on his work area, the room was well lit. As long as it was brighter on the inside than the outside, he wouldn’t be able to see her. Well, see them. Alex and Brooke had joined her now and stared in, too.

She looked around the room. It was like stepping back in time. A small, pot-bellied stove squatted in the corner, a full wood box beside it. The unfinished walls were lined with old license plates, discolored calendar pages, and rusted saws, some of them the largest Maryanne had ever seen, obviously used in the forest industry before chainsaws took over. High on the wall just above Bryce’s head, on a slightly off-kilter, plain board shelf, sat some small sculptures. They were not especially well done, but the subjects were recognizable. A brown owl, a green-shelled turtle, a leaning, peg-legged pirate with a parrot on his shoulder. Then there was the last thing resting on that crooked shelf. Or rather hanging from it.

A dark caster, about seven inches tall with a long neck and outstretched arms and legs. Around its neck was a length of rope from which it dangled. As if alive, the caster—the Heller, as Ira Walker would have called it—seemed to sway and twist on the rope ever so slightly now and again, whenever Bryce nudged against the workbench, sending vibrations up the wall.

“Haven’t we all had enough trouble from the Walkers?” Brooke’s voice rose again. “All those damn Walkers!”

Maryanne didn’t miss that—we all. They all. Legends and hunters. They all had legacies.

Nor did she answer. She kept staring in through the window, her eyes riveted on Bryce.

“What’s he doing?” Alex asked, her curiosity apparently trumping her anxiety, at least for the moment.

“Right, Maryanne,” Brooke said. “Bryce Walker is in there finishing up that smokin’ bird house he’s been working on over the Christmas holiday! Give me a break! He’s just—”

“Standing too still.” Maryanne’s words were a whisper, even to the casters’ ears. They all watched, silently now, as Bryce stood there, stone still and tense. He didn’t even seem to be breathing. Then he did move, and suddenly. His right hand shot sideways to an electrical outlet just above the table, below the shelf. With one quick snap of the electrical cord, the shed was in darkness, and then the casters were not.

As Maryanne processed what was happening, Bryce flew to the door and snapped on the yard light. The three of them were suddenly bathed in brilliant white light.

They tore away from the window, just as the door flew open.

Posted by Julia Phillips Smith at 12:56 AM

Thank you, Julia, for including us in your SPOOKY SERIES. Just wanted to point out that COMES THE NIGHT, book 1, is currently free on all platforms, and we're getting ready for a blog tour for ENTER THE NIGHT. :-)

I'm a little late stopping by, but I have to say, Omigod! Norah. Your excerpt is so scary. I'm reading the first book in the Caster series right now and am enjoying it immensely.