Here's a second excerpt from my vampire story. It takes place shortly after this previous excerpt.

It's 577 AD, deep in the forest in Wales. Peredur has become a special sort of vampire, still learning what this purpose could be. We join him as he continues his training. 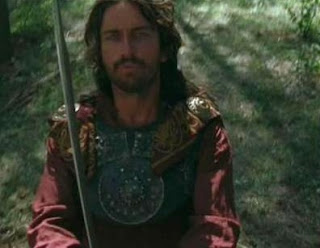 Peredur woke to Vellocatus and his summons to join him outside.

He followed his new brother into the cool night. Though all had ended well so far, he braced himself.

It was all so very confusing. This was a brotherhood of equals, protested Melnak at every turn. The others treated Melnak as a master merely for his longer experience in the brotherhood, nothing more.

Then why did Peredur get the increasing sense their looks of admiration were not the usual welcome for a new brother? As now, when Brude, Adalhard, Sigbjorn, Wladyslaw, even Melnak all stepped back as Peredur entered their midst.

A wave of relief swept over him. Swords. He knew about those, at least. In fact, his hand fairly ached for the weight of it.

Vellocatus offered one, pommel upright. Peredur strode to take it, noticing out of the corner of his eye the others spreading out to encircle them. Peredur bowed slightly as he accepted the weapon.

Peredur did smile. He hefted the weapon several times and tossed it in a swift revolution, then caught it. It was a wonderful blade.

Vellocatus stalked out of Peredur’s range, watching him. Peredur initiated without warning. The blades rang out as he got a truer sense of the blade’s qualities.

Of course, Vellocatus got a telling indication of Peredur’s fighting style. No matter.

Vellocatus kept on the move, walking slowly to size things up. He made no advance until Peredur struck again. After a few parries they’d both seen all they needed to know.

Vellocatus lunged brilliantly. Peredur blocked it with an assured move. He waited again until Vellocatus thrust. Then he feinted and swung the sword in a powerful arc. His sword bit deeply into Vellocatus’ side.

Growling with pain, Vellocatus stepped out of the way, turning to thrust again. Peredur barely managed to deflect it.

A man could not have kept his feet as this vampire did. The scent of his brother’s blood filled the night air. It made Peredur hungry for another blow to hit its mark. He moved in aggressively, as he never would have done before.

Blades rang out, the two warriors moving in a slow dance. Vellocatus’ blood was very distracting. Peredur fought to pull his attention back to the Brigante’s attacks.

But blood glistened down Vellocatus’ tunic, dripping along his leggings to the grass beneath their feet. Peredur knew he must land another blow and do it soon.

How could this vampire fight with such power while bearing such a wound? Peredur forced himself to focus as Vellocatus increased his attack.

It must be the smell, the blood. The smell of it seemed to have the same effect on Vellocatus. A grimace of effort revealed the Brigante’s fangs had descended.

Peredur flicked his tongue to feel for his own. Both were there, sharp and hungry.

And it was that moment of distraction that slowed his turn away from a parry. Vellocatus thrust and his sword bit deep along Peredur’s hip. An angry hiss escaped him.

He bought some space to check the wound. Blood soaked his legging.

He fell upon Vellocatus like the fiend he’d become. Baring his teeth as he fought, the Brigante answered his snarls with his own. Peredur felt the pulses of the brethren surrounding them, like the shouts and encouragements of men.

The bout lasted until Melnak stopped it. Peredur bowed to Vellocatus before handing the sword to Brude. His brethren led him away to sit under a tree.

The wounds stung but not as they should have done. They should have throbbed with the anguish of sliced muscle. Peredur kept his eye on Vellocatus as they rested. He was far too alert and robust for such blood loss. He supposed he appeared the same.

Melnak crouched beside him as the Frank and Brude finished with Peredur. 'A skilled fighter,' he remarked.

'You show remarkable affinity to this life.'

Peredur looked around at the other brethren. All gazed at him with approval.

Sigbjorn spoke up. 'I could not bear the scent of the blood in my first bout,' the Norseman said wryly. 'I forgot about the swords and attacked with my fangs, needing to feed.'

Brude and Vellocatus chuckled in sympathy. Peredur remembered how the smell had intoxicated him, leading to the first slice across the hip.

'Who did you fight?' Peredur asked the Norseman.

'One who has since moved on. A Celt.'

Peredur saw the looks of reminiscence on several faces. He looked at Melnak and saw that his mentor knew his thoughts. 'You have cousins to meet next,' he said.

Peredur let his gaze roam from vampire to vampire. He felt different things from each of them. What he did not feel was a sense of brotherhood.

How could he? Even Melnak's gaze filled with wonder.

Julia, I enjoyed the excerpt very much. :)

Best line:You show remarkable affinity for this life. I can just hear the hiss

Wonderful sense of the struggle to remain focused; the revelation that it was a test of sorts made it even more satisfying.

Why didn't I read the first part? Was it before I start reading you, Julia?
I really enjoye this one, even if it is different from what I've read from you before. i always had a fasscination for vampires and I really like swords!(Thank god mine is a wooden on, or I would have cut like your characters all over my body!)

I simply love the name of the characters!

Not participating, but wanted to say -- WELL DONE. Have a great day Julia. :)

I enjoyed reading your excerpt Julia - I was almost there!

I still don't understand how it is that you are not published yet Julia, but I can't wait till they day you tell us you are! ;-) I loved this excerpt too.

I love vampires! (And hilarious because I had lunch with my Capuchin friend and HE talked about the "brotherhood of equals". ;) Thanks for sharing a bit of your story.

I enjoyed this, Julia. The idea of a vampire being emboldened by the smell of his own blood suggests an eerie narcissism that is intriguing. I think it's eerie because it's not an unusual feature in a lot of people.

(Thanks for your kind words on my blog.)

I admire anyone who can write about vampires, fantasy and romance. I wouldn't know where to begin.

Excellently done, Julia! I could see the scene unfolding in my mind as I read.

Interesting. I'm curious to hear more about this; I don't remember an earlier excerpt, either.

You set a wonderful tone Julia. Wrapped me right up. :)

good writing. enjoyed the way you bring across his sense of disorientation as he finds himself in a new life and culture--in essence, born again.

Vampires are on my mind this week as I'm in the middle of The Historian by Elizabeth Kostova. An excellent story and exquisitely written.

Do you miss Anne Rice's Vampire series as much as I do?