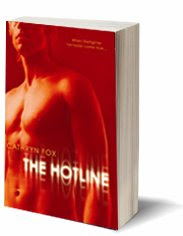 Yes...about winning books...I've had quite a bit of luck winning copies of books at my local RWA chapter meetings. I've had amazing luck winning several books by Cathryn Fox, one of my more prolific chapter mates.

It all started with winning Making Waves, featuring her novella Liquid Dreams. Then I won Pleasure Prolonged, the sequel to Pleasure Control, which I won out of sequence - but no matter! And now The Hot Line. It's a burden, but one I bear willingly.

1 - The Hot Line is a New American Library release. It's an interlaced collection of three novellas weaving in and out of the impending nuptials of Cassie and Nick. He's a firefighter at Station 419, and Cassie's friends arrive in Chicago to celebrate her dream-come-true choice for a mate.

3 - The first story is Fever. We meet Sara, who writes for the Trenton Gazette but dreams of writing for the glossy women's magazine Entice. Mitch is one of the firefighters who works with her friend's fiance. Will she turn their fantasy-fulfilling nights together into a spicy story that could turn her career dreams into reality?

4 - The second story is Siren. We meet Jenna, a lingerie designer who's much saucier with her sketchpad than she is in person. Until firefighter Dean joins his buddies at Cassie's place to catch the tail end of a private fashion show - and sees the designer modelling her own sexy creations.

5 - The third story is Flash Fire. We meet once-bitten-twice-shy chef Megan, who plays a one-on-one basketball game with Station 419 brother Brady. Winner gets the other for an hour - to do with whatever they like.

6 - Though each novella focuses on a different couple, the cast of wedding party members and firefighter buddies is present throughout. This keeps the reader solidly in the world of the Hot Line. Very much like a weekly TV drama where each episode contains all the familiar characters but focuses on a particular one for each episode.

7 - Sexual tension rises from this book like the shimmering air over a sweltering highway. Cathryn Fox's heroes smolder and burn for their women. And her female characters reach out for what they desire - mind-blowing sex with the men who answer the special phone down at the station.

8 - Cathryn's female characters dare to speak aloud the sort of sexual fantasies that women a generation ago could barely have admitted to themselves. Not only do they seek to make their fantasies come true, but in confiding to their sex partners, they create an intimacy that leads to emotional growth for all three couples.

"Brady Wade. Lord, talk about sex appeal. The guy was smoking hot and had her hormones disco dancing in a way they'd never disco danced before."

10 - Cathryn really knows how to end each chapter with a hook. Like this, for example:

"After Brady dropped a soft kiss on her mouth, his stomach grumbled.

Megan chuckled, put her palms on his chest, and shoved lightly. 'Now that we've had dessert, I think we should have some breakfast.'

'Well, I guess I did promise you fine dining and even finer company.'

'Yeah, but you left out the part about fabulous sex.'

He chuckled. 'At Brady's Diner, sex is also served twenty-four hours a day.' He eased himself from the circle of her arms. 'You wait here, sweetheart. It would be my pleasure to serve you breakfast in bed.'

Megan's throat tightened. That considerate gesture did the weirdest things to her emotionally.

Looking sexy, warm, and rumpled, Brady climbed from the bed. He tugged on his jeans and disappeared through the door. Here was one hell of a guy, she thought.

After he left, it suddenly occured to her just how much she liked him. Did she really think she could keep her emotions under wrap with an amazing guy like him?

A guy who could easily be the poster boy for 'too good to be true', she reminded herself, yanking herself back from fairy tale land."

11 - Cathryn not only creates distinct POV voices for her female and male characters, but she does it times three. Sara is ambitious, Jenna wants to break out of her shell and Megan dares to hope all men aren't like her 'house hippo' ex-husband. Mitch protects his heart against feeling too deeply, Dean can see beneath the surface and Brady knows that the way to a chef's heart is through making sweet nothings for her to savour.

12 - As with all wonderful pairings, the couples in Cathryn's book want to find a way to make one another's dreams come true. The men of the Hot Line know how to leave their women melting with delicious pleasure. But Sara, Jenna and Megan want their heroes to fulfill their own fantasies. And they're definitely the women to do it.

"A while back, Mitch thought that he loved his ex-girlfriend and that she actually cared about him. But he quickly learned that like every other woman he'd been with, she merely wanted the fantasy. It was his dangerous, heroic job that attracted women, not the man beneath the uniform - a man who worked long hours and was away from home frequently. Since his last breakup, he'd finally learned to shut down emotionally, giving himself physically while keeping a cool, hardened exterior.

At the sudden thought of giving himself physically, his mind raced to Sara. She wanted the fantasy with him, he could tell. One night of hot lust while on vacation. He'd seen it in her eyes, read it in her every gesture.

Although Mitch was more than willing and capable of fulfilling Sara's wild firefighter fantasy, he'd been duly warned by Nick Cameron to keep his distance. Nick had cautioned him that Sara was a small-town girl who didn't delve into brief affairs. He'd asked Mitch to keep his distance because the last thing he wanted was to see one of Cassie's best friends hurt while in Chicago for the wedding.

Not only was Nick Mitch's coworker - he was also his friend. A friend who'd saved his ass a time or two in the line of duty.

Still he could lie in bed and fantasize about her, couldn't he? Imagining what it would be like to taste her mouth and her breasts. To have her climb over him.

The shrill of their special phone pulled him from his musings and helped marshal his thoughts. 'I got it.' Welcoming the distraction, he jumped to his feet and pushed away from the card table. Without haste, he made his way across the room.

Maybe tonight he'd take the call. Although it had been a long time since he'd participated in the Hot Line, perhaps a soft bed and an even softer woman would help take the edge off and get his mind off Sara.

When he glanced at the caller ID, his heart raced, his blood pressure soared. Everything in him reacted to the name displayed in the small glass window. Tension rose in him, urging him to answer the phone.

What was he supposed to do now?

He took a measured step back, but not far enough that he still couldn't reach it. If he wanted to. But he didn't want to. Okay, he wanted to, but he wasn't going to.

He was not going to pick it up.

Walk away, Mitch. Just walk away.

Before he could stop himself, his fingers closed over the receiver and squeezed until his knuckles turned white.

Just then Dean poked his head around the corner. Grinning like the crazy, intuitive son of a bitch he was, he asked, 'You want me to get that?'

'I got it,' Mitch growled and ripped the phone from the cradle. He pressed it to his ear and said gruffly, 'Hello.'

Sara's soft, sexy voice sounded on the other end. 'Mitch?'

Forgoing pleasantries and getting right to the point, she said, 'My kitty stopped purring. I think it needs to be resuscitated.'

Sweet Mother of God! Mitch slapped his hand to his forehead and drew a steadying breath, working overtime to tamp down his roaring libido. He failed.

Lust ripped through him like a raging forest fire, making him tremble with pent-up need. He growled low in his throat, unable to tame the primal animal rising up inside him, crumbling his resolve to keep his distance. Despite knowing better, he had every intention of breathing life back into her kitty, over and over again, using every means possible, if he had to.

If she expected anything less, she'd called the wrong guy on the wrong night."

Join me next week for a completely different type of book review. Yes, I'm doing a 180 degree turn to review a non-fiction history book by Stephen Kimber. That's Loyalists and Layabouts.

So I've learned to read these reviews with my hand over my eyes. I cover my eyes at some parts then peak out at other places!

Another great review, Julia. I loved Cathryn Pleasure books. I'll have to grab a copy of this one.

I can't wait to get my copy of this. Cathy's stuff is always a great read!

You always come up with the most interesting books! I'll have to check this one out. Thanks for the introduction. :-)

Another good one, Julia!

I have a challenge for you...

The BlogBlast For Peace Meme ~ Join The Revolution.

You're a member of my newsletter right?

Chance to win a copy of either Love Thy Neighbor or Fox's Bride!! Since you have all the luck *wink*

Ooooo!! Cathryn's books sound like a great addition to my library, Julia. Thanks for introducing her :)

Julia, thank you so much for the review!! What a wonderful thing to wake up to this morning. You rock!!!