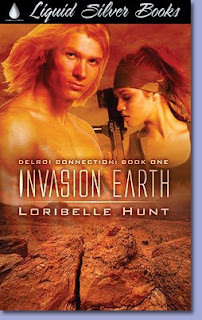 1 - I discovered Loribelle Hunt through a recommendation by my blog buddy, Jennifer McKenzie, who also writes as Jennifer Leeland.

2 - Invasion Earth is part of Liquid Silver's science fiction category. This is a new direction for Loribelle, who has published eight shapeshifter ebooks and three contemporary ebooks prior to Invasion Earth.

Her Shifters paranormal series and two of her contemporary stories are published with Cobblestone Press.

One contemporary story is published with Samhain Publishing.

4 - Invasion Earth introduces us to Sergeant Major Laney Bradford. She's a brilliant strategist fighting for the Earth Alliance army against an alien aggressor known as the Delroi. When she realizes they have gained control of the Doomsayer experimental bomb - something she had protested - Laney is willing to become a diplomatic bargaining chip to save her people from its destruction.

5 - General Alrik Torfa leads the Delroi to its invasion of Earth in search of mates. Their seers have foretold he will find the mate of his heart among these Earth dwellers, but even he is not prepared to discover that the woman fated to be his own is called the Butcher of Roses by his people. Responsible for a bitter victory over the Delroi, this warrior woman will discover the true reason her Alliance had held out so long against superior forces. It was her destiny alone - to become Lady Torfa.

6 - There is a strong diplomatic side to the storyline, which gives the military aspects a broader context. Spys and family loyalties, outmaneuvering hidden agendas and culture clashes between Earth's marriage-bound hostage - Laney - and the Delroi give this futuristic story a Tudors-style backdrop.

7 - I really, really love Loribelle's authoritative military voice. I'm a huge fan of the Richard Sharpe Peninsular War series, the Band of Brothers take on WWII, the battle scenes in the Star Wars saga, the Middle-earth wars of The Lord of The Rings trilogy. I'm not the type of woman who wants to read about a sergeant major heroine as simply a kick-ass kind of gal. I want that sergeant major to know her way around tactical command.

8 - The sexual tension between Laney and Alrik is immediate, because they are of the fated class of lovers. What could be more romantic than the Some Enchanted Evening type of love at first sight? Loribelle's version goes farther than 'across a crowded room'. They lock gazes across a raging battlefield.

9 - Laney and Alrik have given their individual lives to their respective people. What Loribelle does so well is to load their sexual discovery with emotional realization. Can a trained soldier make a marriage work on a planet where women defer to men? Can a royal son of Delroi ignore the historic role of women when he's fallen for a warrior, like the fictional warrior women of his legends?

10 - Loribelle really knows how to end each chapter with a hook. Like this, for example:

"Alrik needed to distract her and thought of the small rose tattoo on her breast. He found it sexy, but it had been a surprise. Women on Delroi did not mark their skin permanently like that, but there was an old, mostly abandoned tradition he wondered if she’d adopt.

In the past bonded females, of warriors in particular, had pierced their nipples. It was a painful procedure, and a show of submission and strength. He hardened again and shared the image with her. He wanted her to do it, needed that sign of her surrender. He crossed his arms over his chest, snaring her with his gaze, watching the blush spread up her neck to her face. Felt her arousal. He watched the emotions play over her face, knew some of what she was thinking. She didn’t think there was a submissive bone in her body, yet she responded to the carnal demands of his shared visions. He wanted to drag her from the room and demonstrate exactly how much mastery he would have over her body. Thankfully, he was spared the embarrassment of dragging a kicking and screaming woman off by the arrival of his brother. It was time to get down to business."

11 - Loribelle's steamy scenes need special mention. Laney's vulnerability issues are worked out in the bedroom with her dominant alpha husband-to-be. This works perfectly in a story that has a strong role-of-women subtext, especially since Laney's desires aren't what you'd expect from a sergeant major.

12 - There are lots of scenes that belong to Laney and Alrik, but Loribelle has built a very lived-in world in Invasion Earth. Government officials, royal family members, soldiers from Laney's unit - everyone walks onstage with a fully-formed backstory.

" Leaning forward, he grabbed her upper arms and pulled her close, not allowing her any freedom of movement.

She’d never liked being ordered around, especially in bed, but it wasn’t protest that rose. He was a man she’d never be able to push around. She couldn’t fight the urge to give him control, didn’t even try.

Eagerly, she straddled his hips and looked him in the eye. He gripped her ribcage, guiding her. She gasped and closed her eyes. He held her there until she met his gaze, saw the stark need stamped across his features. Then he plunged deep, building a slow steady rhythm. She leaned forward, a little wobbly while incapable of bracing her hands on his shoulders or chest, but unable to resist the allure of his skin, the compulsion to taste his lips. She flattened her tongue against his neck, following a leisurely trail up his salty skin, smiling at his grunt when her teeth closed over his ear lobe and nipped.

He didn’t give her the chance to kiss him. After pulling her flat against his chest, she heard him murmuring something in his own language. Struggling to breathe, dragging his masculine scent deep into her lungs, she didn’t have time to consider the words, or the radar-like pinging she felt straight to her marrow. Replete and exhausted, she collapsed against him, barely registering when he freed her arms or stood and carried her into a bedroom.

It was done. Alrik hadn’t planned on doing it so soon. The binding prayer had burst forth from him when he felt her tighten. Even if he could take the words back, he wouldn’t. She was his now. She might despise him in the short run, but in the long run, it was the right thing to do for everyone.

Tomorrow they would begin negotiating trade agreements that would put more of the Delroi’s unattached males on Earth. Hopefully, it would be enough to save his people. Until then, he had a warm soft woman in his arms and duty could wait.

Her hair was still up and braided, the length twisted and pinned against her head. He pulled the small pins out and dropped them on the bedside table until finally the length was free. Surprised, he noted it reached the bottom of her back. Removing the band holding the end, he slowly worked the plait loose.

Wavy from the braid, her hair was like heavy silk in his hand. He held it to the light to examine its color, a deep brown shot through with big streaks of red. He brought it to his face and breathed in its sweet scent, which smelled faintly of the flower called gardenia on this world, a plant the Delroi women with them had quickly discovered and adopted. He loved it.

Alrik dropped the strands and they fell around her like a curtain. Grinning, he wondered if it would drape them both when she rode him. He would test that at the earliest opportunity. For now, he was content to explore her without her yammering at him.

He had admired the tactical cunning of this woman for months. Her body was just as impressive. The bulky uniform concealed feminine curves. A small waist accented her flared hips and high breasts. Her skin was smooth and blemish free except for the small rose tattooed on one breast. Laugh lines around her eyes added to the appeal of an already pretty face.

He rested his palm over her flat stomach, wondering how she would look swollen with his child. Nostrils flared in desire when he realized she could even now carry a babe. Would she give him girls? A houseful of females with their mother’s warrior spirit?

She moaned in her sleep and leaned into him. Spooned up behind her, he pulled her leg over his. With a long sigh, she cracked an eye open and looked up at him.

'Not a dream,' she murmured, moving against him.

'Shh,' he answered, hand sliding down to where their bodies joined.

He was content to hold her, drifting between sleep and wakefulness. Some time later, a soft knock came at the outer door. After untangling himself from her limbs and pulling on his pants, he let his brother in. Daggar glanced over at the sleeping chamber.

Join me next week when I review Amy Ruttan's Love Thy Neighbor.

Posted by Julia Phillips Smith at 9:19 AM

OMG!!! I knew you'd do a better job than I would. I love this story! Loribelle is ALWAYS a good investment.
Great review Julia. I lurrrrve you.

Wow Julia! I'm so glad you liked the book!

I've got to buy, if both you and Jennifer recommend.

Loved your poem from Tuesday.

Your reviews are the best, Julia. I am in awe.

SQUEEE for Loribelle (who I discovered at Nationals over Indian food -- and she's a right HOOT!!)

You do such wonderful reviews, Julia! :) I always enjoy them.

I'm off to the library to look for this book. If they don't have it, Amazon, here I come!