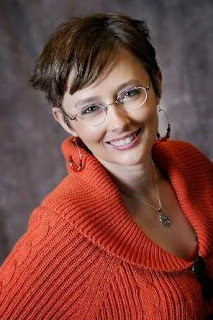 I'm thrilled to have young adult paranormal author Trish Milburn here today for the second in my Spooky Stories Author series, running all month on Thursdays here at A Piece of My Mind--welcome, Trish!


1 – Many readers may know you as a contemporary romance author writing about rugged cowboys, firefighters, detectives and neighbors handy with renovations. When did your stories begin to take on supernatural elements?

I have always loved supernatural stories in what I read, watch on TV and in movies, and in what I write. It was just a timing thing.

I literally sat on the couch and watched all seven seasons of Buffy the Vampire Slayer, all five seasons of Angel and the first season of Supernatural.

In the midst of all that, I started getting the idea for the Coven books. At that time, it was just one book, but it eventually was revised into three. That book is what got me inspired to write and keep going. The next summer I sold my first book. While it wasn’t the first Coven book, WHITE WITCH (the first Coven book) was what kept me going. 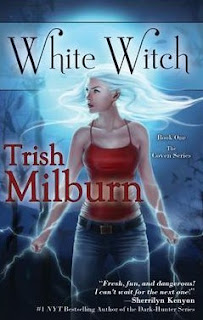 2 – Tell us about your latest release, MAGICK.

But the journey to the answers she needs isn’t without danger, fear and self-doubt.

3 – When you began this series, did you know that’s what you were writing?

No, as I mentioned above, this began as one self-contained book that was titled simply Coven. It won Romance Writers of America’s Golden Heart Award, the top award for unpublished romance fiction, in the Young Adult category in 2007.

Do you ever begin a story as a single title only to realize it’s really Book One?

Over time, the story and characters grew to cover three books.

4 – Did you do a lot of research into magic for this series, or did you go with your instincts while world-building?

I did some research, but a lot of what I have is totally made up. I have an entirely different mythology for witches, but it is still rooted in one of the most infamous periods in U.S. history, the Salem witch trials.

I visited Salem last year to do on-site research, and it’s a lovely little town. I worked some of the things I saw there into the second and third books (BANE and MAGICK), which are set in Salem. The first, WHITE WITCH, is set in a fictional small town in North Carolina in the beautiful northwest corner. 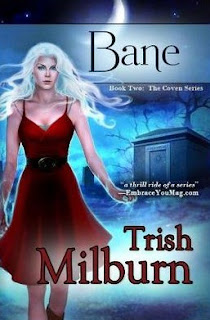 5 – When writing spooky material, do you ever give yourself shivers?

Not so much, which is surprising because I’m the world’s biggest chicken.

I tell you what does give me fraidy-cat syndrome though – watching The Walking Dead too late at night! I love that show, but I can’t watch it right before I go to bed.

6 –Did you read scary stories while growing up?

Oddly enough, no. I read a lot of those classic girl stories – Little House on the Prairie, Island of the Blue Dolphins, Julie of the Wolves. It wasn’t until later that I started reading paranormal things, although I’d always loved paranormal shows.

Speaking of Joss, you’ll get that I’m a fan because I mention him and his work in the Coven series. One of my secondary characters is a devoted Whedon fan with a vast collection of Whedon-inspired T-shirts.

7 –Did you watch spooky TV shows or films when you were young?

I grew up in the country where we only got three TV stations on a good day through an antenna, so my viewing was limited. Plus, my dad wasn’t a fan of such things, so that limited it even more.

I can remember being glued to the original V mini-series when I was young. I also really loved Star Trek reruns, sci-fi and westerns, so it’s no surprise that Firefly is my all-time favorite show because it mixed those two genres to Joss Whedon awesomeness.

Speaking of Joss, you’ll get that I’m a fan because I mention him and his work in the Coven series. One of my secondary characters is a devoted Whedon fan with a vast collection of Whedon-inspired T-shirts.But I did watch the V mini-series and Star Trek reruns.

8 –As a reader/viewer, do you prefer spooky/scary, or do you delve further into horror? How far do you go as a writer?

I don’t do hard-core horror. I’d say my writing is more spooky, but it can be dark.

After all, my heroine, Jax, had to watch her mother murdered by her coven because she wanted to leave the coven and live a different type of life. That’s pretty dark, but it’s not gory.

Same goes for my viewing. I’m a huge fan of the Underworld movies, so that’s more my preference than scary stuff that could really happen. You can’t pay me enough to see a slasher movie, no matter who is in it.

9 – If you had to name your top three supernatural creatures, what would they be?

10 – Have you explored these character types in your fiction so far?

The witches in the Coven series, and I’ve sold a vampire book to Harlequin Nocturne. I don’t have a release date yet, but I’m hopeful it will be the beginning of a series in which I’ve created an entirely different backstory and world for vampires.

11 –If you could visit three hair-raising destinations, where would you go? Or perhaps you’ve already sampled a few…?

Salem isn’t scary if you’re walking around during the day, but I’ve got to imagine that there are some ghosts in a place that saw so much death.

Honestly, I don’t like to be scared in real life. See big chicken comment above. I like to limit it to what I read and watch, then go back to my nice safe real life where there are no spookies waiting to jump out at me.

12 –Are there some earthbound, everyday aspects of life that you find scary?

The idea of chemical or biological warfare scares the bejeebers out of me.

I think the things we see on the news every night are far scarier than anything I’ve ever read about in a book. This is weird for someone who worked for many years as a journalist, but I don’t typically watch the news.

It’s all bad and scary, and I’d just as soon not know about a lot of it. I do read the news each morning as I’m eating breakfast, but there’s something about the way that TV sensationalizes everything that makes it all much scarier.

I want to enjoy my life, not be scared all the time.

13 – Thanks for dropping by A Piece of My Mind, Trish! And for my readers, here's a treat:

A short excerpt from MAGICK, the final book in the Coven trilogy. 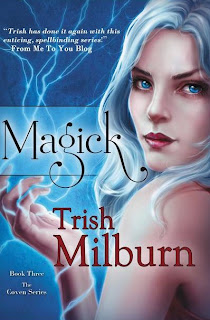 I wake not to flames but a windowless stone room. For an addled moment, I think I’m in the basement of the herb shop. A stab of pain hits me in the heart, and tears pool in my eyes. Fiona, the woman who’d found her way into my heart as a sort of surrogate grandmother, is gone. Dead. Killed by the man who should have killed me instead. I blink against the tears and look at my surroundings. The bare room isn’t the hidden repository of witchlore below Wiccan Good Herbs. It’s also not the cold, snow-covered ground where I lost consciousness.
Where I killed Amos Barrow. Where I gave in to the darkness inside me. Barrow shot his gun at Keller, the boy I love, and I lost my last shred of control after fighting so hard to not let that happen.
Fear shoots through me, stealing my breath. Keller. God, is he even alive? Did Barrow take everything from me? The urge to kill him all over again wells up inside me followed quickly by nausea.
My stomach churns and I turn to the side to retch. When I’m finished, I can’t even lift my hand to wipe my mouth. I’m chained to a big, thick chair that reminds me of a medieval throne. My feet are as immovable as my hands, and panic surges to the surface. I try to draw on my power, but it’s not there.
Oh, God, what has happened to me? Where am I? More images settle into my memory, one of red-cloaked figures surrounding me just before I lost consciousness. The Bane. Had Sarah played me all along, making me think she was working with me until she and the other members of the Bane had the opportunity to take me out? Did they capture Egan, too? What about Toni, Rule and Adele? I swallow hard again when I think of Keller and wonder if my actions led to his death? I can’t live with that. Losing him, losing my friends would be so much worse than losing myself.

Posted by Julia Phillips Smith at 7:01 AM

Great questions and an intriguing excerpt - thanks for sharing these!

Great interview, and loved the excerpt. Thanks for sharing.

good point. news is far more dark than anything a novel would do.

Salem was a special time and place for America. Gothic meet logic. Judge Sewall's Apology: The Salem Witch Trials and the Forming of an American Conscience takes a look at the witch trials at the time.

Looking to add this author to TBR pile.

Thanks, Kimberly, CountryDew, Pearl and Tara for stopping by and commenting. And thanks to Julia for hosting me today.

Those covers are beautiful and I love the excerpts.