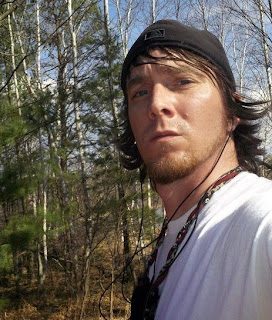 Having spent my early years in Michigan, it's a delight to have Michigan indie author Caleb Casey here today for the third in my Spooky Stories Authors series, running all month on Thursdays here at A Piece of My Mind. Welcome, Caleb!

1 – You’ve been working with the short story format so far. Do you see any novel-length works in your future?

I'm actually working on a novel-length project right now. Progress is slow – I'm just not very fast when it comes to writing – but I like what I have so far.

Many of my favorite books are short story collections and I like the form.

My husband's a big fan of horror anthologies.

It fits with my writing style, keeping things streamlined, keeping the story moving.

My novel-length project has the same kind of style and themes as my short fiction – bleak, dystopian, but with dark humor and a glimmer of hope – it just has more characters and more scenes.

2 – Tell us about your latest release, NOW YOU’LL NEVER KNOW: A COLLECTION OF STRANGE STORIES.

It's a collection of the first stories I've been able to finish.

It took years to complete. I'd been writing for fun for quite a while but something was missing and I don't know what it was. At some point it just clicked for me – like the combination of all the reading and writing I was doing flipped a switch – and I felt like I'd figured it out, how to tell a story effectively.

I was debating whether or not to send some of my short fiction out to magazines, see if anyone wanted to publish them, and then I saw what Amazon was doing with its Kindle Direct Publishing and opted for that route instead. 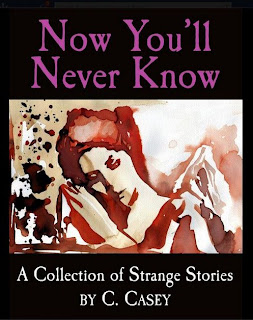 I took three stories I thought were closest to “finished” and published them as singles, and the goal was always to eventually finish the other stories and publish a collection. Some of the stories in NYNK I started many years ago. Only two of the stories from NYNK were written entirely this year.

The stories are often strange and bleak but with a lot of dark humor. What works for me is to incorporate some element of the supernatural or paranormal into an everyday place and situation.

I don't, but I do get caught up in some of the other emotions sometimes. I find the spooky stuff to be interesting rather than scary, usually.

4 –Did you read scary stories while growing up?

Actually, I started out reading Tolkien's THE HOBBIT and THE LORD OF THE RINGS and similar fantasy stuff, and I got into reading scary stuff later on.

I took a year or two off from reading after college – I was burned out on it, after reading four or five novels per week for assignments

The same thing happened to me with movies after graduating from film school.

When I started up again I decided to try a Stephen King book (DREAMCATCHER, his latest at the time). From there, I started to check out other horror authors like Clive Barker, Shirley Jackson, Robert Aickman, Bentley Little, Harlan Ellison, Richard Matheson, and now pretty much all I read is horror fiction.

Poppy Z. Brite's WORMWOOD, Barker's BOOKS OF BLOOD, and King's NIGHT SHIFT – all of which are short story collections – are three of my favorite books. My favorite novels are Jackson's WE HAVE ALWAYS LIVED IN THE CASTLE and Barker's THE HELLBOUND HEART. I'm also a big fan of Jackson's short fiction.

5 –LOL! I'm pretty sure my husband has every one of those.

Did you watch spooky TV shows or films when you were young?

I'm a big fan of The X-Files and the Tales From the Crypt TV show. I have an enormous collection of DVDs and literally hundreds of them are horror movies, and they represent a wide range of horror subgenres.

My favorite, one of the few that I find to be legitimately scary, is The Descent.

Here's a few of my other favorites: Planet Terror, the Evil Dead series, [Julia's interruption: "Give me some sugar, baby."] Feast, High Tension, Severance, Jeepers Creepers, Dead Alive, Sunshine, Hatchet, The Thing, Tremors, and Dead Snow. I like Rob Zombie's House of 1000 Corpses and The Devil's Rejects and I thought his Halloween remake was solid. I loved Pan's Labyrinth but it's so bleak I've only been able to watch it once. Donnie Darko – great movie, one of my favorites – qualifies as “spooky,” right?

6 –Definitely! As a reader/viewer, do you prefer spooky/scary, or do you delve further into horror?

It depends on what mood I'm in.

I like a lot of different types of horror fiction. I like to read less overt horror stories, Shirley Jackson, Robert Aickman, where it's mostly psychological, a sense of dread behind everything, but I also like zombie movies, slasher flicks, sci-fi horror, creature features, all kinds of horror movies.

7 – If you had to name your top three supernatural creatures, what would they be?

I like things that are alien, not necessarily from outer space, just things that are strange or different, things that we don't know where they come from. I like stories that involve ghosts or hauntings. The concept of demons offers a lot of possibilities.

8 – Have you explored these character types in your fiction so far?

Quite a few of my stories involve things that are alien. There's the masked things from “The Insomniacs” and the strange co-workers from “Drones Like Us,” the humanoid creatures from “No Blood.” I prefer to use things that are strange, with their own set of rules, rather than using vampires and werewolves and things that people are already familiar with, although if I thought I had a new angle on one of those I would write it.

“The Demon Version” deals with demonic possession, exploring this question: If your friend was possessed, would you rush her to a church or a hospital like they do in the movies, or would you wait and see what it's like?

I haven't written a “ghost story” yet, but the project I'm working on now, one of its themes is living in a place that seems haunted, even though there aren't visible ghosts.

9 –That sounds goosebumpy. Are there some earthbound, everyday aspects of life that you find scary?

I wouldn't say scary, but I find a lot of everyday things to be strange.

Sometimes I wonder how people can do some of the things they do, ranging from the worst acts of physical cruelty to just general rudeness and a lack of compassion, greed for money, betrayal. Some of it's just beyond comprehension.

10 – Where is the spookiest place you’ve ever been? And what made it so scary?

When I was a baby, we lived in a house that had a haunted room.

People swear to it. One story I heard, a person was trying to change a light bulb in there, reaching up in the dark, and feeling a hand grab theirs out of nowhere. Strange noises, strange breezes. My family moved out of that house while I was still very young.

11 –If you could be a fly-on-the-wall visitor in a setting from another author’s spooky story, where would you go?

Hill House, the haunted place from the Shirley Jackson novel.

Why do you think people like to be scared?

It can be an exhilarating sensation.

I think people like scary books and scary stories because you can explore strange and terrible places and people while staying in a safe environment. Get the sensation without the risk. You can close the book or turn off the TV if it gets to be too much.

13 –This is an excerpt from The Winged Things, one of the stories from NOW YOU’LL NEVER KNOW: A COLLECTION OF STRANGE STORIES. (People can currently download the whole story for free from Smashwords.) 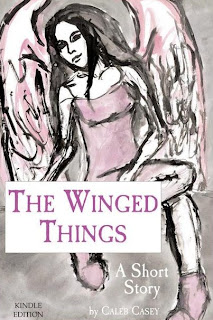 I go into the kitchen, feeling my way past the furniture in the dim light, and see what the late Martin Howard has in his refrigerator. It’s still cool inside, and the touch of chilly air feels great on my face and chest; I allow myself to bask in it for a moment. What I would really like is an ice-cold Coke, but the only beverages available seem to be of the alcoholic variety. I grab a Corona.

Back in the living room, they’re still carrying on. Desmond’s eyes are on me and I can practically hear his bad thoughts.

“Hey honey, how about you bring me one of those?” he says. Ugly face, worse manners.

“Desmond, you’re a toad. Stop staring at me or I’ll break this bottle over your head.” I take a sip of cold beer.

Mrs. Prendergast, evidently overhearing our stimulating conversation, sees the beer in my hand and gasps, an exaggerated look of shock on her face. Her eyeglasses are large, round, and thick. She has the pointy face of a turtle.

“You’re drinking Marty’s beer?” She does her best to sound mortified. Seems a little forced.

“He doesn’t need it anymore.” It’s a response that only a jerk would use, I guess, but Mrs. Prendergast has been getting on my nerves ever since we came into this house.

The winged things tore him apart.

People were gathered outside, looking up at the sky, talking, obviously scared. The black clouds above us were tinged with crimson; the sky looked like the inside of an active volcano. Someone – the guy who lived next door to me, Mason, a bald guy, mailman, I think – was trying to start his Jeep, no luck. He opened the hood and started tinkering around. The others in the street had nothing interesting to say, foolishness about the power coming back on soon and “everything’s going to be fine if we just stay calm.”

That’s when the winged things came…

They appeared on roofs and in between houses; they crawled from behind bushes and trees. We heard the flapping of huge leathery wings, like an invasion of man-sized bats. The “just stay calm” plan got chucked right into the trash when the first winged thing shrieked. It was loud. Others joined in. The things seemed to be surrounding us, inching closer, some crawling on all fours like wolves, teeth bared. People started babbling in a mad panic. I looked back and saw one of the winged things near my front door.

Lovely apocalypse we’re having, I thought.

Posted by Julia Phillips Smith at 1:13 AM

I tried writing a Gothic once. I'll never do it again. I'm not really that into the scary stuff.

What good timing for this post - with Halloween around the corner, here's hoping Caleb will find a few more sales than usual!

Thank you, Julia. It turned out great. I appreciate the support.

Love all the Halloween related stuff! I'm a huge Stephen King fan, but I love it best when I read one of his books and have to leave the lights on ... you're right, it's exhilarating!!

Congrats on the release of the stories - they look great!

Thank you for this interview! I'm a FREAK for the horror genre in its many manifestations and in any medium, so learning about new authors is always a thrill!