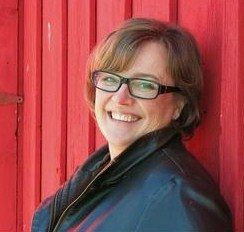 Time for the fourth and final interview in my Spooky Stories Authors series here at A Piece of My Mind.

Here on the east coast, the leaves thin out in the trees and thicken on the ground while the world glows orange, gold and red. Cold creeps in, darkness comes early and in a few days the little ghosts and ghouls will haunt the streets with their treat bags. A perfect time to welcome fellow Canadian Linda Poitevin to my blog -- Linda, thanks for dropping by!


1 – Your Grigori Legacy series is a hybrid of genres. What was the reaction from publishers when you pitched your idea? 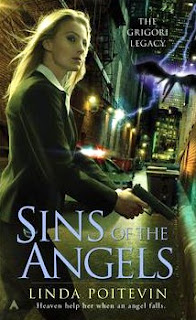 Much as I love a good romance, however, this story just isn’t a happy-ever-after type and rewriting it as such would have been…well, just wrong, lol.

Needless to say, I was totally thrilled when the editor at Penguin USA saw the bigger picture and decided to give me a chance. J

2 – Tell us about your latest release, SINS OF THE SON.

SINS OF THE SON is the second installment in what will ultimately be a four-part series (I’m working on book 3, SINS OF THE RIGHTEOUS, now).

Your titles are great.

It picks up pretty much where SINS OF THE ANGELS leaves off, and delves much more deeply into the Heaven/Hell conflict that is spilling over into our world.

I’ve learned to never, ever write spooky scenes at night while I’m alone in the house…does that answer your question?

4 – Ha, ha...most definitely. I can't help but wonder if you read scary stories while growing up?

I most definitely did! My favourites were the “scary tales from the crypt” and “tales of terror” anthology types, along with the highly suspenseful Nancy Drew and Hardy Boy series…at least, they seemed suspenseful then! J

5 – LOL! For me, too! Not to mention sophisticated. I always loved the fact that she went out 'sleuthing'. Did you watch spooky TV shows or films when you were young?

I used to love having the living daylights scared out of me by those!

This was back in the dark ages, mind you, so we didn’t get a lot of television variety where I lived (two channels with a seemingly never-ending stream of sports…ugh).

The two movies that stand out most in my mind were Race with the Devil and Carrie, both of which I saw in the theatre. I never did work up the nerve to see Exorcist, lol.

6 –As a reader/viewer, do you prefer spooky/scary, or do you delve further into horror?

Though I’ve had readers tell me that some of my scenes border on horror, I’m afraid that spooky/scary is about as much as I can handle as a reader/viewer these days. Must be getting old or something… ;)

7 – If you had to name your top three supernatural creatures, what would they be?

Angels take top billing, of course, then dragons, then ghosts. I love witches, too, but don’t really consider them to be supernatural.

8 – Have you explored these character types in your fiction so far?

Only the angels, but these are early days in my writing career…I hope!

9 –I have no doubt! Are there some earthbound, everyday aspects of life that you find scary?

Too many to mention, honestly. I avoid watching the news because of it. Escapism, anyone?

10 – Where is the spookiest place you’ve ever been? What made it so scary?

The first house that my husband and I rented.

It had a bedroom in the basement that was painted entirely in red—ceiling, floors, walls, closet, everything (à la Amityville Horror)—and had a slide bolt on the outside of the door.

I swear there was something besides us living in that place *shudder*.

11 –That's pretty creepy. If you could be a fly-on-the-wall visitor in a setting from a spooky book, TV show or film, where would you go?

Ooo, yeah. My Winchester obsession. You have incredibly good taste.

I want to thank you for visiting with all of us today. Before you go, why do you think people like to be scared in the first place?

I believe it’s at least partly for the adrenaline rush.

There’s nothing quite like a good scare to heighten the senses...and to make us appreciate the fact we’re alive after the fact!

13 –Linda is giving us a short excerpt from SINS OF THE SON. Enjoy! 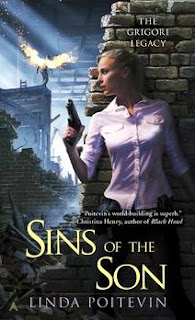 Aramael didn’t move and a frisson of warning ran down Alex’s spine. If she didn’t put an end to this standoff, it was going to get ugly. No matter what Aramael’s reason for being here might be, he would never allow himself to be taken into custody. Couldn’t allow it.

Shooting a quick glance past him to where Henderson was beginning to look downright pissed, she pitched her voice low enough that only Aramael could hear. “You need to get out of here. Now.”
Aramael met her gaze over his shoulder. “I can’t.”

“Look,” she said through clenched teeth. “I get that you have an agenda of some kind, but neither one of us needs the kind of attention you’ll bring if you’re taken into custody. Now get the hell out of here while you can.”

Not that having him disappear into thin air would be much better, but at least he wouldn’t be around for questioning.

“You don’t understand,” he said, gray eyes boring into hers. “I can’t.”

“You—” She stopped. Stared at his shoulders. Willed herself to see them there, rising beyond him, flexed, powerful, iridescent with their golden fire. But there was nothing. Her gaze moved to his again.

“Your wings,” she whispered. “Aramael, what happened to your wings?”

Posted by Julia Phillips Smith at 1:03 AM

I'm glad you didn't have to change your original vision for your work, Linda. It's something worth fighting for, and I reckon it works out better than a lot of publishers expect it to when a story is allowed to remain the way the writer envisaged it.

I'm glad, too, Kimberly! It's wonderful to have the story arc unfolding the way it played out in my head...and I think it's a better story all around because of it. Thank you so much for stopping by today! :)

I also strongly support authors who know deep down that their fresh-take stories will work if given the chance. I'm glad you found a home for your version, Linda.

Thank you so much, Julia! And thank you for having me to visit today. I loved your questions and how they took me back to (much) younger days. Going to have to look for some of those old books. :)

Linda and Julia,
It's cool that you both write unique stories that are a little different, a little out of the box. I like those kind.

I'll have to put your book on my to-read list. Thanks.

Thanks so much, Mia! I love to hear when I've been added to a TBR list. Happy reading! :)