I woke up after the second Rush concert two weeks ago with this song going through my head. It's the perfect way to begin celebrating these musicians' birthdays, as Geddy Lee came very close to not being here at all.

His parents were both young Jewish prisoners in Auschwitz, having come from different towns in Poland. Despite the harrowing circumstances of their meeting, Mary and Morris maintained contact with one another until the war ended and they were liberated.

Morris tracked down the young woman for whom he'd bribed officials and guards in order to send her shoes and other items to ensure her survival. They married as soon as they could, eventually emigrating to Canada and becoming parents to three children -- one of whom is Rush bassist and lead singer Geddy Lee.

The lyrics of this song were written by drummer Neil Peart, but the song belongs to Geddy's parents. A very, very happy  60th birthday to Geddy.

I've got musicians from three trios featured in the July birthday set. Considering that July is mainly a Cancer birthday, and Cancers are intensely family-focused, it comes as no surprise.

Hey, why not lip sync a complicated spoken-word song during a music video while looking directly into the camera?

As a Christmas maniac, I'm always in the mood for Christmas. Especially when it's Vince Guaraldi's kind.

Posted by Julia Phillips Smith at 12:37 AM 3 comments

Join me at The Popculturedivas for a look at taking 13 Words Which Lead to a Book That Will Make You Proud.

Posted by Julia Phillips Smith at 7:19 AM 0 comments 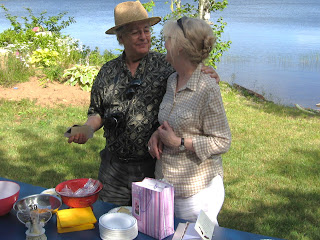 This week I'm handing the set list over to my uncle, Charles Doucet (father of my historical-romance-novelist cousin, Julianne MacLean.)

My uncle has been a musician, among many other things, for most of his life. He's heading off today for a three-day art show with his painterly photography collection at Victoria Park, across from the Public Gardens on Spring Garden Road, in Halifax, Nova Scotia. If you aren't in the area, you can check out his web site where all pieces are available (just contact him through the web site.)

Brad and I are heading over this afternoon to visit my aunt and uncle at the show -- that's them pictured above at their 50th wedding anniversary celebration last summer.

And now...over to you, Uncle Charlie.

Barney Kessel:  My first and greatest influence as a beginning teenaged, potential jazz guitar player! Bought his album, “The Poll Winners, with Ray Brown on Bass, ( another major influence!,) Shelly Manne on drums. Wore the album out attempting to duplicate what I heard thru my 331/3 LP player in Sydney, Nova Scotia.

2 - All the Things You Are - Hank Garland

Hank Garland: A very tasty guitar player… I learned his tune, “Relaxin”, back in the 1960’s and it’s in my repertoire to this day.

3 - Do Nothing Till You Hear From Me - Ed Bickert

Ed Bickert: A Canadian, working out of Toronto, is recognized as one of the best jazz guitarist in the world. He plays guitar on the Moe Koffman hit, “Swinging Shepard Blues.” Also backed up Paul Desmond, the alto sax player formerly with Dave Brubeck of “Take 5” fame.

Joe Pass: A superb and truly amazing  jazz guitarist! His playing is immaculate, every note true and crystal clear, even at fast and furious tempos. I have a number of his teaching DVDs…too bad he has passed away… a real loss to up and coming guitarists looking for a creative path to follow!

Ray Brown: A Bass Player of impeccable talent. The foundation of time for any musicians he played with… such as Barney Kessel, Oscar Peterson, Ella Fitsgerald and countless others. At 76 years old, he had just finished a golf game, went to bed in his hotel room for a nap before an evening performance… and didn’t wake up… another great loss! 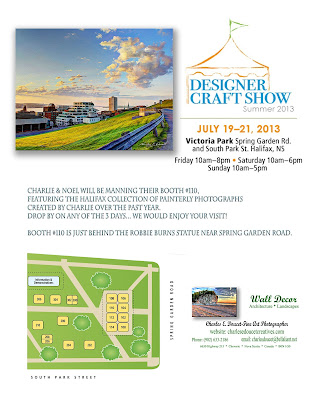 Posted by Julia Phillips Smith at 7:58 AM 3 comments

Brad and I just got back from our anniversary trip, which I'll share more about next week.

Our vacation was launched in style with a Lyle Lovett concert, and I'm home in time for two Rush concerts which I'm seeing with my Rush-superfan sister Michelle.

So here's a wee taste of those shows, plus some extra fun thrown in.

Lyle had a 5-piece band for his show here last week, and they did this one to great appreciation from an adoring crowd.

This band hails from Prince Edward Island, where Brad and I began our vacation. Go, drummer Sean Kilbride! Brother of my high school sweetheart.

And now up to Cape Breton. JP Cormier is a Cape Bretoner, while Dave Gunning hails from Pictou County, just a stone's throw from the island on Nova Scotia's mainland.

Here's the musician to whom they were paying tribute in the previous tune. If you look closely in the background of several different performances in this tribute clip, you'll see a very young Anne Murray, Bruce Cockburn and Ashley MacIsaac.

And then again on Sunday night!

YYZ is the airport code for Toronto, my other home and my honey's hometown. Kind of full circle after my Big City man went on his first vacation exploring the Maritimes to have a slice of Toronto drop on by this weekend.

Posted by Julia Phillips Smith at 12:00 AM 4 comments

Join me at The Popculturedivas for a look at taking Pride in Your Work.

Posted by Julia Phillips Smith at 12:30 AM 0 comments

It's that time again, kiddies! Time to revel in all things American.

Happy 4th of July to all of my fellow American bloggers, readers, fellow writers and authors. Have a great long weekend.

Brad and I are off on our 21st anniversary vacation trip. It's the first vacation we've taken where we weren't reuniting with family or combining work with play. It's almost like a honeymoon.

I'm going dark on social media, so I'll return your visits when I get back.

Posted by Julia Phillips Smith at 12:00 AM 2 comments