How was your Christmas? Hope it was beautiful like mine was.

That's Brad and me, enjoying our Christmas morning breakfast. (My mom was the photographer.) 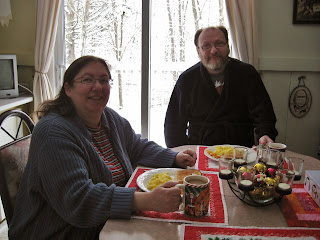 Next up on the holiday calendar: New Year's Eve!

2013 has been the Year of the Black Snake according to the Chinese zodiac. Snake years always bring a great deal of transformation, as snakes shed their skin and force change upon us, whether we're ready for it or not.

For this final 5 on Friday for 2013, here are five songs about snakes.

This one takes awhile to get going. The actual music part gets rolling at the 1:30 mark.

Posted by Julia Phillips Smith at 12:10 AM 1 comments

Join me at The Popculturedivas for 2013 -- The Transforming Year of the Black Snake.

Posted by Julia Phillips Smith at 12:19 AM 0 comments

At the moment, Mike and I are carrying on a tradition started four years ago by our friend Travis. Over the years we've had up to ten bloggers creating wonderful musical sets to share with one another on Fridays.

If you'd like to join in, please do! It's a lot of fun. I've discovered a ton of great new-to-me music doing this weekly feature.

This is the last set before Christmas rolls around next Wednesday. Here are five lively seasonal tunes to get your toes tapping while you get your last-minute Christmas stuff done. 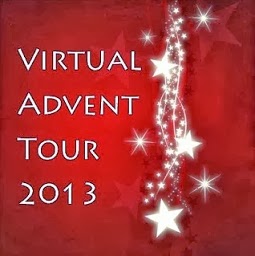 This is my sixth year participating, and I'm so glad that Marg and Kelly have launched such a wonderful holiday tradition into the blogosphere. It continues to be a highlight of my season.

I blogged previously during the 2009 Virtual Advent Tour about my love of ballet and The Nutcracker in particular. I can never get enough of it!

Is The Nutcracker a Christmas tradition for you, as it is for me?

Are you lucky enough to live in a large city with a professional dance company? Is a live performance of this ballet classic one of the things your soul can't live without every year, as it is for me?

I have a large collection of Nutcracker-themed Christmas ornaments, including a Clara, the Mouse King, a Sugarplum Fairy, some Snowflakes, some Waltz of the Flowers figures and a Harlequin doll. I'm always looking to add more. 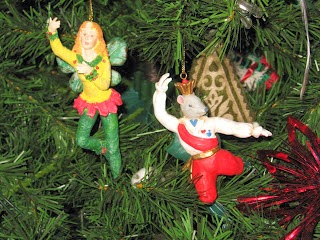 Aside from writing and film, ballet is my truest passion. I studied ballet when I was a younger, uninjured version of me. When dancing myself was no longer an option, I was lucky enough to get a job as an usher at the theatre that was at that time the home of the National Ballet of Canada in Toronto.

For eight years, my Christmas season revolved around the performances of The Nutcracker, and I got to see so many wonderful behind-the-scenes aspects of what it means to be the Sugarplum Fairy in a production such as this.

For those of you who may already have your tickets for this year's performance, who may hum many of the pieces from the score by Tchaikovsky -- here is a backstage peek at one of the women who dons the famous tutu and tiara of the Sugarplum Fairy.

"When I'm onstage, I'm not really thinking about the steps anymore," says principal dancer Heather Ogden. "I want to be hearing the music and letting my body remember the steps by itself and move with the music, and enjoy the story and bring a character to life."

"The Nutcracker in many companies is the staple at Christmastime, and it's rare to come back to a role every year. So it's really nice to do the Sugarplum Fairy, because you get to revisit it so often. I've found a level of comfort where I feel like I can really enjoy telling the story."

Ruth Bartel, resident cutter in the National Ballet of Canada's wardrobe department, gives an in-depth look at how a tutu is built: "We build our costumes to last for twenty-five to thirty years...A tutu something like this, the Sugarplum, could be as much as thirty-five hundred dollars."

Heather Ogden is the featured Sugarplum Fairy in this piece.

Did you always wonder what it would feel like to be the Sugarplum Fairy?

Posted by Julia Phillips Smith at 7:08 AM 2 comments

This week marks my final post in this year's Birthday Boy/Birthday Girl project, which ran throughout 2013. I had a lot of fun with it.

I found it fascinating to see the sorts of music created by people born in different months, for the most part displaying the characteristics of their astrological signs.

Here's a wee recap of the Birthday Boy/Birthday Girl sets:

2 - Sex Crime from the 1984 soundtrack -- Annie Lennox from Eurythmics

Let's head into the Christmas swing of things, shall we? My sister and I will be having our annual Sisters Outside Lights Christmas Party tomorrow, so here are five tunes to set the mood.

4 - It's the Most Wonderful Time of the Year -- Andy Williams

Posted by Julia Phillips Smith at 7:07 AM 1 comments