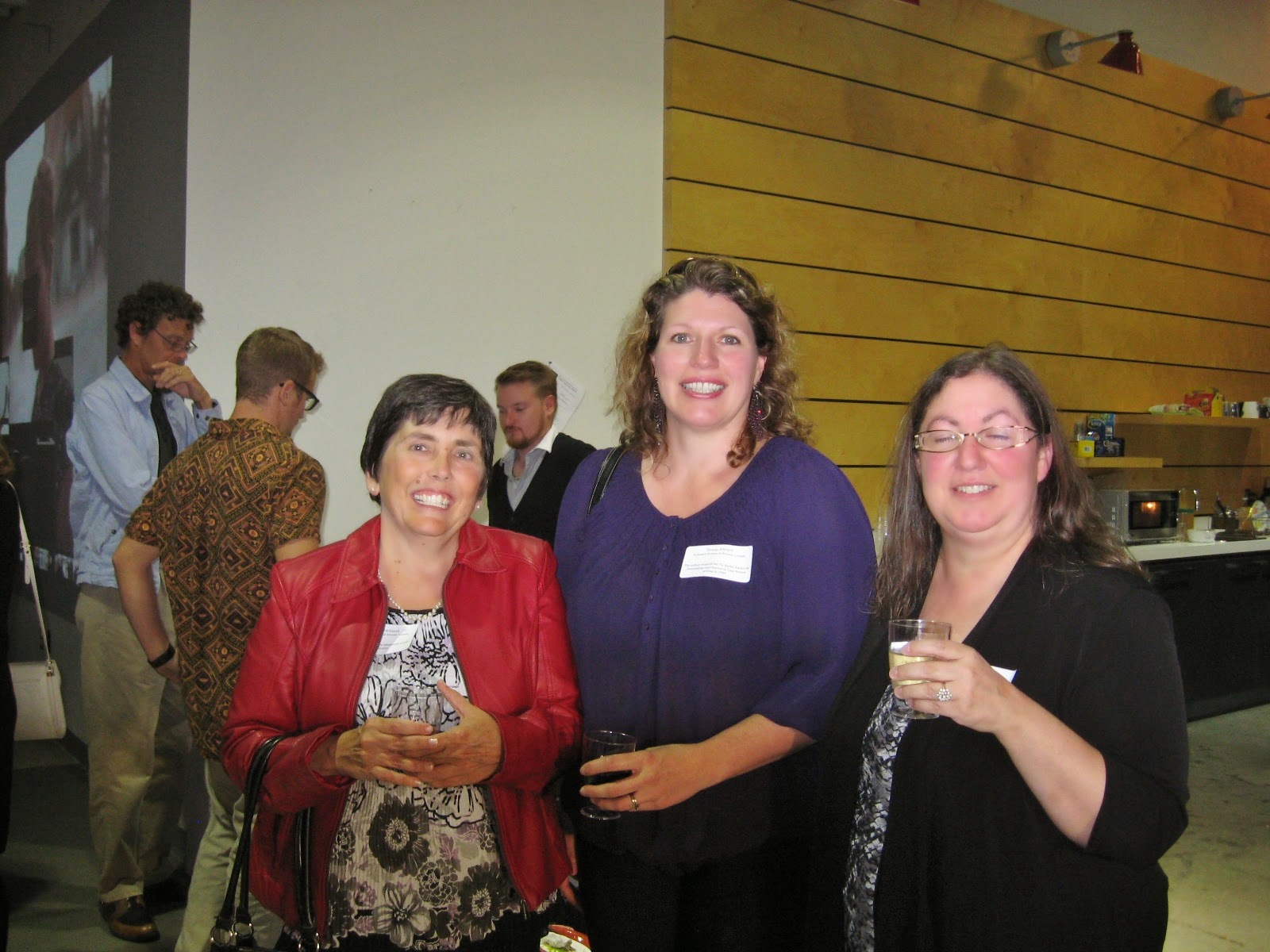 My writers' group had a busy weekend last week, making our second appearance at Word on the Street in Halifax. That's me above with fellow Romance of Atlantic Canada authors Jennie Marsland and Donna Alward at the opening reception, which took place at the Nova Scotia College of Art and Design's Institute of Applied Creativity on Saturday night. 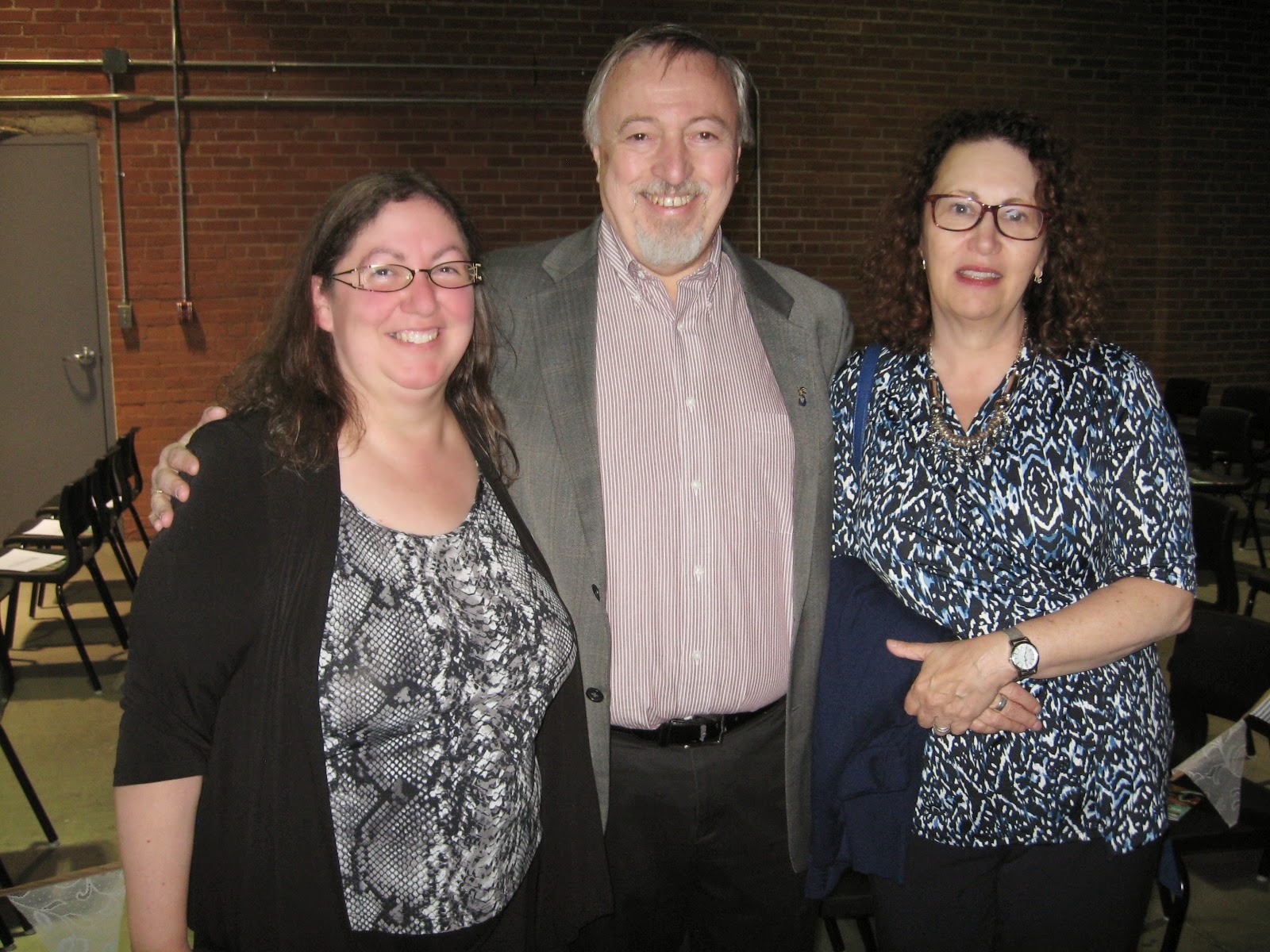 As I was heading out following the reception -- just before the East Coast literary awards were about to start -- I bumped into Stephen and Jeanie Kimber. If you can seriously believe it's been basically 30 years ago, I was the Kimber's nanny (mostly for their youngest, who is now 30!) Stephen went on to win the Evelyn Richardson Non-fiction award for What Lies Across the Water: The Real Story of the Cuban Five. 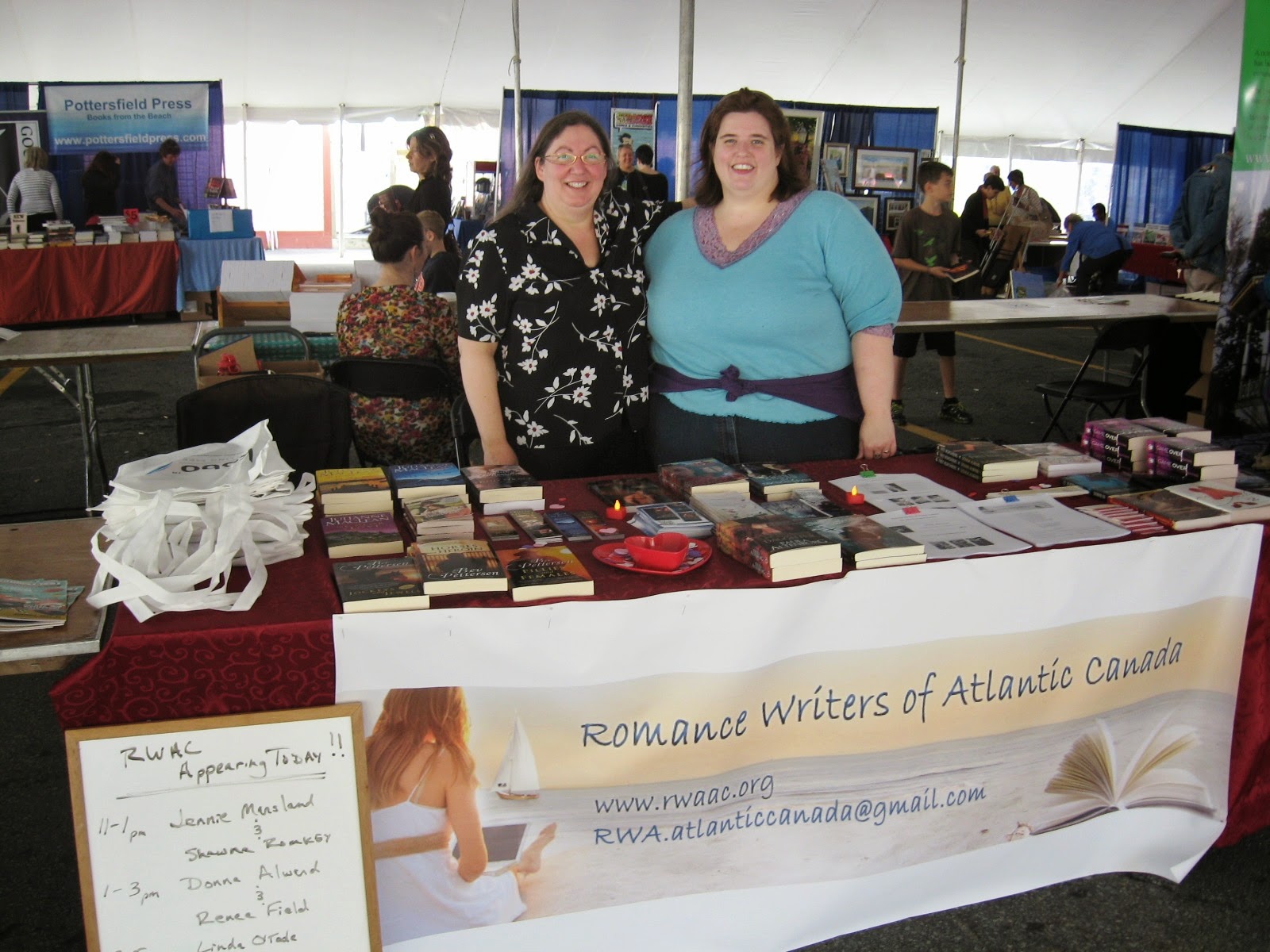 On Sunday, RWAC prez Taryn Blackthorne and I set up our table which was then run by rotating teams from our group. Thanks to everyone who took part!

This week's set is dedicated to writers everywhere as we carry on, shaping our stories no matter that there are only 24 hours in a day, unexpected emergencies, day jobs and unco-operative fictional characters that won't behave while we're trying to get our word counts.

Posted by Julia Phillips Smith at 8:15 AM 1 comments

Join me at The Popculturedivas for Why It's Important to Reach Out to Your Local Writing Community.

Posted by Julia Phillips Smith at 7:29 AM 1 comments

I'm still in a ballet state of mind -- music from my favorite ballets has been going through my head all week as I readjust to being back in the office at my day job.

All pieces feature my favorite Russian dancer Vladimir Shklyarov from the Mariinsky Ballet.

So -- let's get seated, watch the lights go down, the curtain go up -- and on with the show.

This lovely piece of music has definitely been going through my head this week. Mozart is mainly associated with lighter music, but I've always been a fan of his darker, more emotional pieces.

I absolutely love the 'high-flying kiss' section of this dance piece, which starts at the 6:15 mark and ends at the 7:00 mark.

And now for something completely different. The piece I'm referring to begins at the 17:08 mark and ends at the 18:19 mark.

It's the perfect rushing-around music.

Of course, if you also wanted to check out the romantic closing pas de deux beginning at the 39:25 mark and ending at the 44:35 mark, I wouldn't discourage you.

Posted by Julia Phillips Smith at 7:15 AM 1 comments

Join me at The Popculturedivas for Time for Word on the Street.

Posted by Julia Phillips Smith at 6:47 AM 0 comments

Just wrapping up a glorious two weeks of vacation from my day job. Had a short trip down to Yarmouth at the beginning of my time off to celebrate my mom's best friend's 80th birthday. 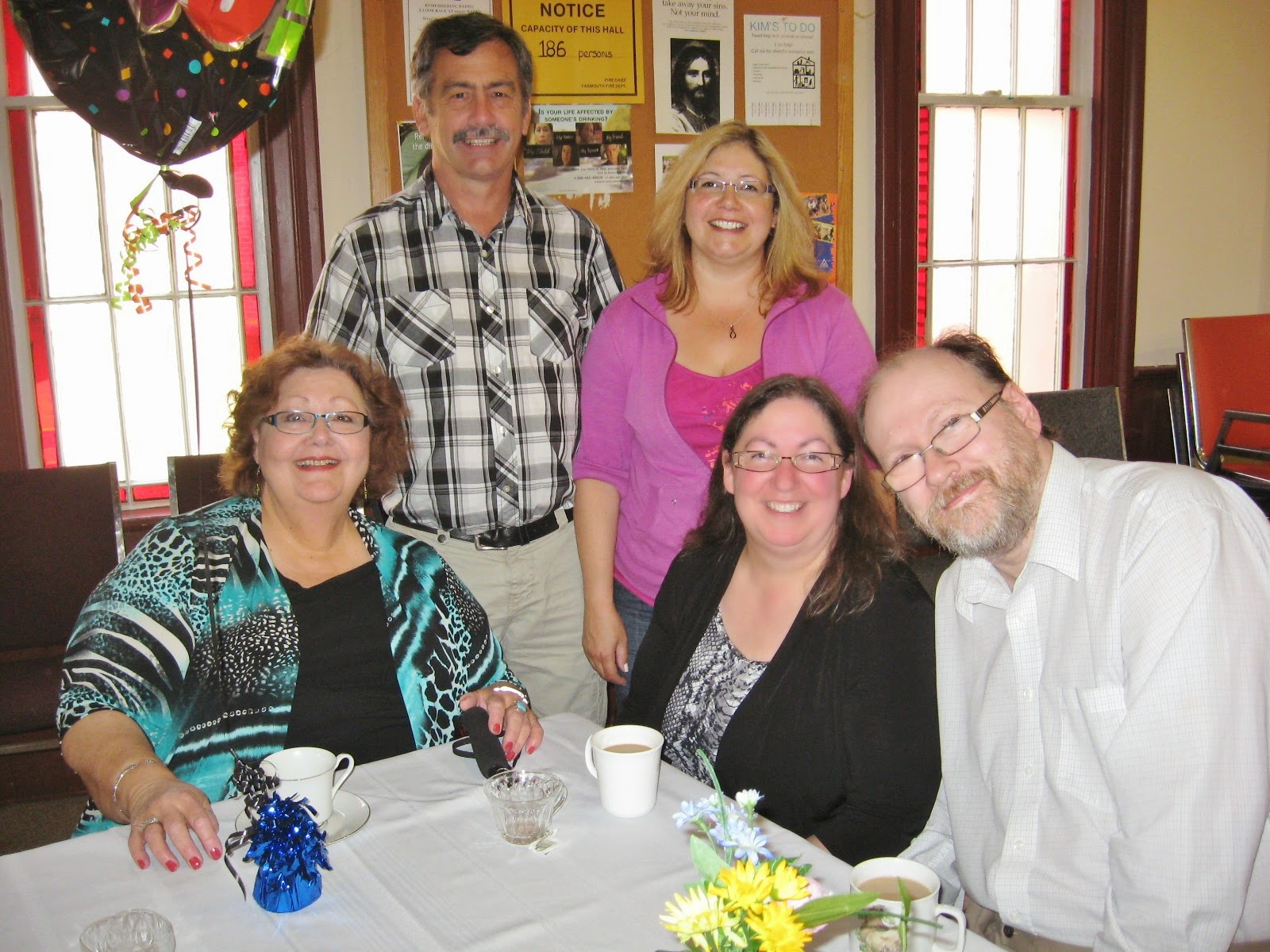 That's my mom, Paulette, above with my brother-in-law Newt, my sister Michelle, me and my husband Brad.

And here's the birthday boy -- Bill -- in light blue at right, with Jim, also a longtime family friend. 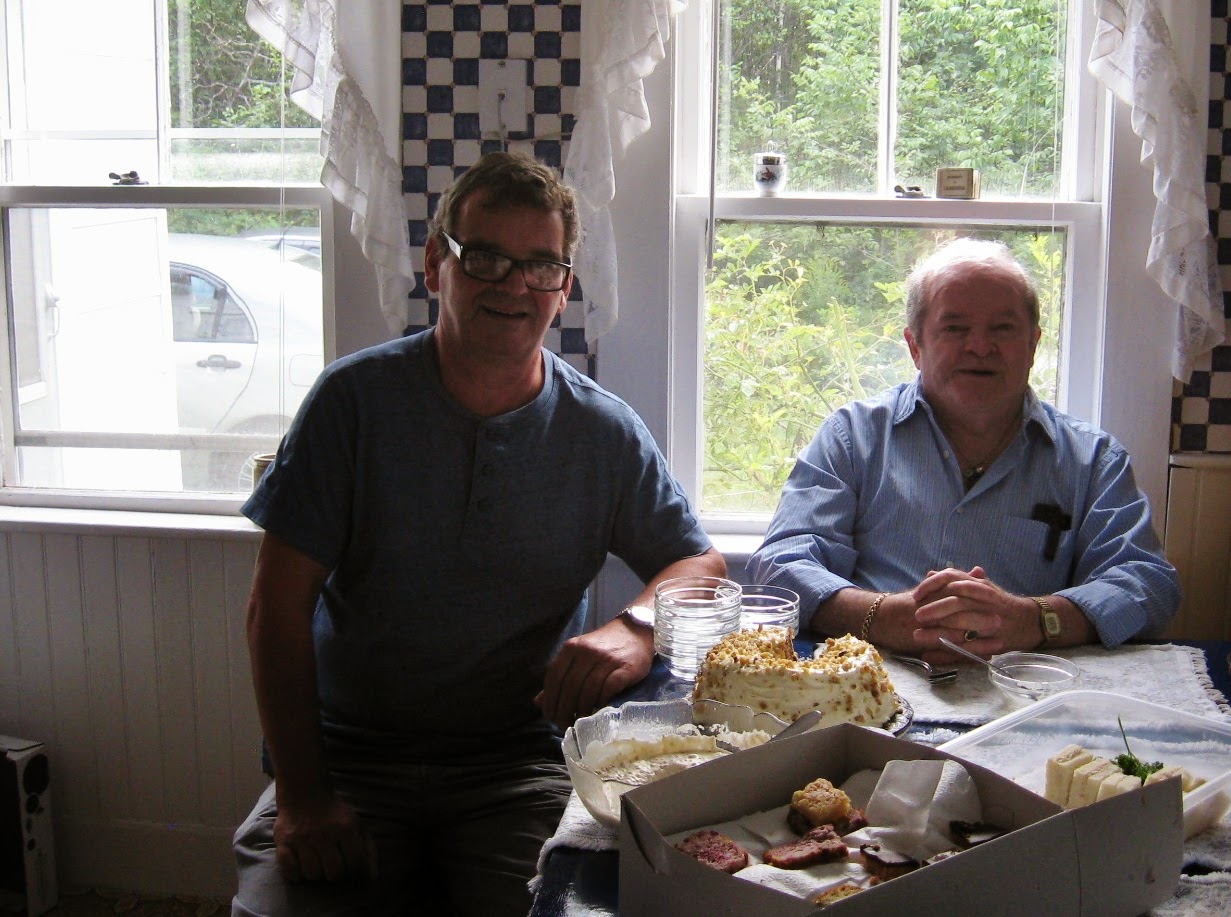 A great time was had by all (although we managed to refrain from getting written up in the papers.)

For the most part, I've been having a staycation and getting lots of rest, although Brad and I have been going on lots of adventures (you can check out our A For Adventure Challenge HERE.)

One thing I've been indulging in -- non-stop -- is watching ballet on You Tube. Sending out gratitude to all the people who secretly videotape live performances and then post them on You Tube (not allowed by any stretch of the imagination, as all live performances are copyrighted by the show's producers.) It used to be my job to stop people from doing just that when I worked as an usher at the performing arts theatre in Toronto. That was before the arrival of cellphone cameras.

I shouldn't be grateful to all of these people taping the footage -- but I am! I can't fly around the world at the moment to see all of these performances, so spending hours watching ballet on You Tube is the next best thing.

So, since I'm most definitely in a ballet state of mind, here are five lighthearted pieces from ballet scores that, unless you're a massive ballet freak like me, you likely haven't heard. They aren't the main musical themes, so you would need to hear the full ballet score in order to discover these. They've always been favorites of mine.

Well, almost all of these have been favorites of mine for years. This one is a brand new discovery after watching the Harlequin and Columbine pas de deux (dance for two) from Carnaval during this vacation.

3 - Morning Serenade from Romeo and Juliet -- composed by Sergei Prokofiev


4 - Andante from the Peasant Pas de Deux, Act I of Giselle -- composed by Adolphe Adam

Now that September has arrived, it's time for my monthly feature for 5 on Friday -- The Hit Makers.

Here are five of my favorite bossa nova artists and the songs that brought them to the masses.

3 - The Girl From Ipanema -- Astrud Gilberto, Joao Gilberto and Stan Getz, from a composition by Antonio Carlos Jobim and Vinicius de Moraes -- 1962

Posted by Julia Phillips Smith at 9:20 AM 0 comments