My mom and I attended the funeral of a family friend this afternoon -- former radio broadcaster Ron Roberts.

Ron had passed away on May 4th, but his memorial service was delayed until today as his niece was also helping out another elderly family member at the same time. Originally from Cornwall, Ontario, his extended family remains there while Ron spent the last five decades here in the Maritimes.

A very close friend of my Uncle Charlie's, Ron celebrated his 80th birthday in 2013, where I joined my aunt and uncle, my mom, my sister and my brother-in-law to wish Ron a Happy Milestone Birthday. 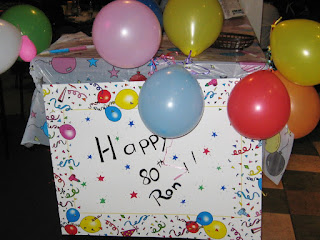 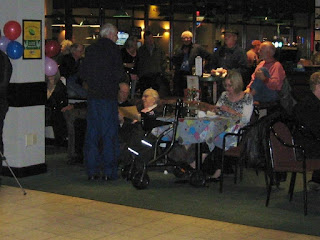 That's Ron sitting on the couch reading a birthday greeting, surrounded by well-wishers -- including his niece at right who helped with both this birthday and now with arranging his memorial service. 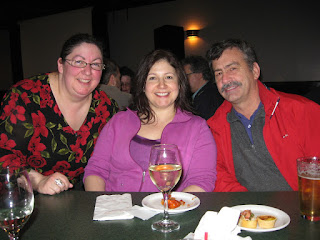 That's me with my sister Michelle and my brother-in-law Newt at the party. 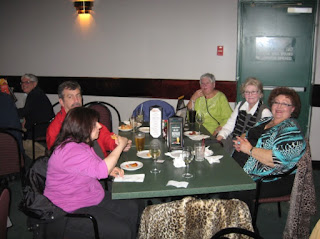 Also at our table: Mrs. Thorne, wife of one of the musicians in Uncle Charlie's various bands; Aunt Noel and Mom 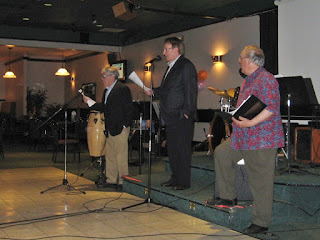 Ron's lifelong radio days friends and fellow broadcasters John Cunningham at left, Clary Flemming, center, and Uncle Charlie at right read long-distance birthday greetings (including one from my other uncle, Warren, in Michigan) from the many friends Ron made in his broadcasting career.

Once again, Uncle Charlie spoke to the gathering following Ron's funeral, at the reception.

In honour of Ron and his made-for-radio voice, his encyclopedic musical knowledge and his unending love of the big band era, swing jazz, cool jazz and cool cats, here is a Ron-inspired 5 on Friday set featuring some of his favourites -- beginning with a song that he co-wrote.

Ron did an extensive blog interview about his career last year for Bevboy. Here are some tales about the tracks in today's set:

"While I was here in Halifax, I was going with a pretty young girl from Queen Elizabeth High School. I wrote a song that was recorded by Carl Dobkins, Jr...He had a big hit with 'Look! Look! My Heart Is An Open Book!' It was his first big hit. And this was a follow up to it. It automatically got a lot of air play."

"I was a big fan of La Rosa’s because he, next to Frank Sinatra, his phrasing is better than any singer going...He never recorded very much. I only have one album by him, I think."

3 - It Shouldn't Happen to a Dream - Al Hibbler

"Al Hibbler...was a blind singer with Duke Ellington’s band. He came here to Halifax to do a show at the Forum, which I MC’d. The opening act was a very young comedian/impersonator by the name of Rich Little.
They came back to my place after for a party. When you come off the Bedford highway, around the corner on to Joe Howe, that red brick building with the wooden top, that was my place...But I had no furniture whatsoever: I had just moved in. I invited them back to my place for drinks and sandwiches, but we all sat on the floor. Rich Little is telling, in voice, some of the dirtiest jokes you could never tell on air.

Before we went on stage at the Forum, I asked Al Hibbler if he would take requests. I said, 'My favourite Al Hibbler song is ‘It Shouldn’t Happen To A Dream’.' We’re all sitting on the floor with our backs against the wall...I said, 'You didn’t sing my song!' He said, 'I’m sorry. I forgot all about it. I’ll do it now. Do you have a piano?' I said, 'Do I have a piano? I don’t even have any frigging furniture! Why do you think you’re sitting on the floor?' He said, 'That’s ok. I’ll do it anyway.' And it was one of the most beautiful moments of my life. He put his hand up to his ear and leaned right into my face and started singing. It was magic: Al Hibbard, singing right to me in my place like that."

"I used to use this theme called 'The Turquoise Cloud'. On the same album, there was a song called 'Lady of the Lavender Mist'. It’s a very hard song for anybody to hum because it’s all in the voicing of the instruments he used.
Duke Ellington’s band played The Lobster Trap. It was in the basement of what is the Trademart Centre is now. He was there for a week. Peter Power is my longest and oldest dearest friend. He was the President of the Musician’s Union...He took me backstage to meet Duke Ellington.

At the time he was very, very old and not very well. I said, 'Does a guy get to make a request?' He said, 'Yes. What would you like to hear?' I said, 'Could you do ‘Lady of the Lavender Mist’?' He said, 'How does it go?' I thought, 'Is he putting me on? There’s no way I’m going to stand here in front of this genius and try to hum this melody to him!' "

5 - Somewhere Beyond the Sea - Bobby Darin

"When I was working at WSDS in Massena I heard that [Bobby] was appearing at the Three Rivers Inn, which is just outside of Syracuse. When I worked at WOLF I used to go there all the time.

Anyway, I drove from Massena to see him at the Three Rivers Inn. After the show the guy said, 'You’ll have to wait to go upstairs to the dressing room.'...When I did go up, he was sitting there in his shorts with a towel around him. And, I saw all these great big tanks. At the time, I thought, 'Oh, they’re probably used to fill balloons for the chorus girls or if somebody’s having a birthday.' I later learned that, oh, my god, they were for him. He would just have to go and suck oxygen afterward...You would never know because he just gave everything he had."

I'm still in catch-up mode, having taken off most of May and now June from blogging, due to pacing for my fibromyalgia.

And now, back to our regularly-scheduled programming.

This year I'll be taking a once-a-month look at specific instruments and showcasing five songs or tunes which place that instrument front and center.

This year's feature is called Spotlight On...

...and for our sixth installment, I'm venturing out from the primal body instruments of hand-clapping, whistling and vocal harmonies to explore percussion. Following April's look at drums, and May's look at the vibraphone or vibes, here are five songs which shine a spotlight on the piano.

Join me at The Popculturedivas for Our Journey Back to Joy.

Posted by Julia Phillips Smith at 11:30 AM 0 comments