Akelamalu opened this meme up to all takers, so I grabbed it. 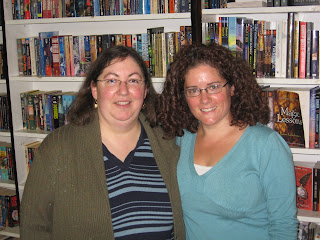 My husband bought three of this series for me while he was in Toronto at Bakka-Phoenix Books, a marvellous independent sci-fi / fantasy bookstore on Queen Street West. The lovely and talented manager of the bookstore is none other than Chris Szego, my sister's former roommate when we all lived in Toronto once upon a time.

Whenever I'm in Toronto I head over to the store to see Chris. As in this picture from last October, when my sister was sworn to secrecy so Brad and I could just walk into the store like any old customers and - surprise! 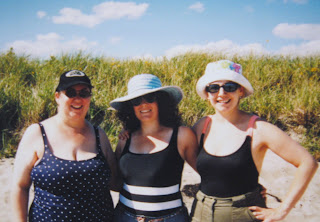 And luckily she often visits my sister once a year, so we get to enjoy her down east, too. Here's a picture from an afternoon spent at Clam Harbour Beach a few years ago - that's me, Chris and my sister Michelle.

Anyhoo, she loaded my husband's arms with the first three of Lukyanenko's series, which includes a fourth book, Final Watch that I don't have...yet...

I couldn't wait to sink my teeth into this book. I first saw the Russian film Night Watch, based on Lukyanenko's book, in 2006 at the theatre here in Halifax, though its Russian domestic release was in 2004. I absolutely adored this film. A blurb on the book cover says 'Brace yourself for Harry Potter in Gorky Park.' (Washington Post) I'd say it's also safe to call it The Matrix meets Anton the Vampire Slayer in Putin's Moscow.

Here's the back cover blurb to get you up to speed for the mini-excerpt:

"Walking the streets of Moscow, indistinguishable from the rest of its population, are the Others. Each owes allegiance to either the Dark or the Light, two powerful forces that long ago forged an uneasy truce in order to avert chaos and disaster. They watch each other closely, carefully maintaining the world's precarious balance between good and evil.

Anton, a young Other of the Light, is a Night Watch agent who patrols the streets and subways of the city, protecting ordinary people from the agents - including vampires - of the Dark. On his rounds, Anton comes across a young woman, Svetlana, who is under a powerful curse that threatens to destroy the city, and a boy, Egor, an Other still unaware of his powers, whom Anton narrowly saves from the vampires of the Dark.

Anton and his partner, Olga, a powerful female Other who has been turned into an owl as punishment, work frantically with their Night Watch colleagues - each gifted with their own particular powers - to deflect Svetlana's curse and to protect Egor from the creatures that pursue him."

The boss sighed and took the hookah tube from his mouth. The cold opium smoke streamed out onto the floor.

"You, Anton Gorodetsky, a programmer, unmarried, of average abilities, are linked to the girl with that vile black filth hanging over her head."

Well that is an easy post. Problem is, I'm not reading ANYTHING right now. LOL!

Oh, what a fun-looking meme! Thanks for the tag. Hopefully, I'll have my post up tomorrow!

And The Night Watch sounds like quite an intriguing read! :)

That sounds like a good book and you have 3 in the series. How kind of hubby to buy them for you. It must be great knowing someone who works in a book store - you'll get all the news before it happens!

Sounds like a great book, Julia. Have a fun weekend.

I totally LOVE that pic of you gals at the beach. Awesome! Now you just need another summer and a great book too and they'll mesh beautifully, yes? ;)
blessings,
~Toni~

See, this is what happens when I fall behind on my blog hopping...I tagged you for this meme today! DUH! ;-)

OH yeah, and this book? Totally up my alley, and will be added to my list of "must haves"

Great meme, Julia! Thanks for the tag. I'll do this on my next post.

In my opinion everyone must browse on this.
free gametop | play action games | my flash games | play pc games | gametop games