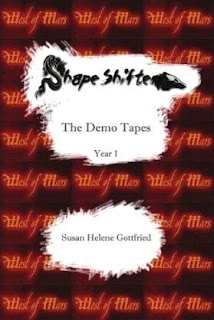 And what timing, as I'm doing a book review for the incomparable Susan Helene Gottfried. I discovered Susan through Thursday Thirteen, so this is a real joy to be able to give you 13 Reasons to Read ShapeShifter: The Demo Tapes Year 1.

1 - ShapeShifter: The Demo Tapes Year 1 is a Lulu.com publication, under their Literature & Fiction category. This novella-length collection of episodic scenes introduces readers to the members of ShapeShifter, a metal band hailing from Riverview on the west coast of the United States.

2 - These scenes originally appeared on Susan's blog West of Mars between April 2006 and April 2007. She collected them into The Demo Tapes due to popular demand. Can't beat that!

3 - Susan's novel about ShapeShifter is called Trevor's Song, now being shopped to publishers. She began posting scenes about the characters in her novel to share their backstory with her blog readers. It didn't take long before Susan had her very own groupies, clamouring for more, more, more about Trevor and the boys.

4 - Trevor Wolff is by far the readers' favorite. He's the Very Bad Boy of Rock. The band's bass player has an acid sense of humor and a darkly attractive way with the ladies. Who can resist him? No one I have yet to meet...

5 - But Mitchell Voss is my personal favorite. He's the white-blonde, long-haired rock god - ShapeShifter's front man. He's also Trevor's best friend from childhood, a childhood that saw Mitchell pulling Trevor from the wreckage of his family and into the security of the Voss home. *swooning now*

6 - Daniel anchors the band from his drum set, as well as providing charm to the media when Bad Boy Trevor and Rock God Mitchell won't co-operate for the journalists. Eric plays lead guitar and lavishes long, thoughtful interviews on guitar magazine writers. They provide much-needed stability to balance the drama left in Trevor's and Mitchell's wakes.

7 - Susan's Demo Tapes begins at the very beginning, with a scene that brings Mitchell and Trevor together for the very first time. Mitchell thought he was just tagging along as an unwanted chaperone on his sister's date. Trevor thought he was checking out a new chick. Neither of them knew their lives would change that day in the lobby of the movie theatre. But a stadium-filling metal band was born the moment they met.

8 - Each scene works on its own as a brief snapshot from a larger work. The Demo Tapes delivers to readers what a real demo tape does for musicians. Susan shows us her chops. Her world of Riverview and ShapeShifter, the musicians, the road crew, the family relationships, the romantic entanglements - they're as real to me as the stubble on a tour bus morning. Having been a bass player's girlfriend myself, having done my share of lugging amp cords and gear into clubs, I recognize these guys every time I turn the next page.

9 - I really, really love Susan's dry humor. It shines best when she writes about Trevor.

"That didn't surprise Trevor in the least. He knew he was ugly. Trevor Wolff did not blame others for his own issues, thankyouverymuch. Not that being ugly was an issue; issues, you could fix somehow. Ugly, you were just stuck with."

10 - Susan creates truly distinct POV voices for her female and male characters. Trevor's world view is miles away from Kerri, the woman who wins Mitchell's heart from the adoring throng. She gives us Mitchell's middle class mom, dad and sister. We meet the early band groupies game enough to follow Trevor and Mitchell to a rather disreputable hotel. Then there's Val. She's Daniel's main squeeze, a talented chef who is picky about her ingredients, and a total bitch when she wants to be.

11 - The Thursday Thirteen format gave Susan a perfect platform to launch hilarious tidbits our way. Even if you'd never encountered a Thursday Thirteen before picking up The Demo Tapes, you'd assume a list of thirteen was dreamt up by ShapeShifter themselves, a la David Letterman's Top Ten.

This left me in tears of laughter, when I first read it on the blog, and again in The Demo Tapes:

5. Tea (Might have worked better had they brewed it instead of rubbing wet tea bags on Mitchell's head.)

13. Corned Beef (This was Trevor's half-joking solution. At this point, Mitchell figured he had nothing to lose. Including, it turned out, the green.")

12 - Susan's backstory scenes cover an extensive range, from the boys' teenaged years just forming the band, through their 20's carving a place for themselves gig by gig, and into their prime as stadium rockers. The Demo Tapes gives us a little taste of every era. My personal favorite is their very beginning. Most likely because she's writing about my own high school years. And hits every target, every time.

"The show tonight had been a disaster, there was no sugar-coating it. From the lead singer who fell off the stage and broke his guitar to the drummer putting a stick through the head of his snare and not having a backup handy to the lighting and the sound, there was only one good thing that could be said: not many people had been there. Patterson had counted about twenty, including himself and Sonya.

Trevor was, of course, grinning like the night had gone perfectly. For all that boy had been through, Trevor never stopped seeking the joy in life; it was that quality that Patterson had noticed the first time Amy had brought him home. It was that unfailing optimism that had led Patterson to take custody rather than let him face jail time.

Mitchell, though, was the opposite. Head down, shoulders slumped. It wasn't unreasonable to think that there'd be no more band come morning.

'Son,' Patterson said, trying to be gentle and not startle the boy.

It didn't work. Mitchell's head shot up and his eyes widened. 'Oh, hi, Dad,' he said when he recovered. He grimaced. 'You going to rub it in?'

'No,' Patterson said slowly, tilting his head at the empty spot on the bumper of his Bronco. As Mitchell sat, Patterson noticed Trevor hovering, just within earshot.

Well, Patterson figured, this would be good for Trevor to hear, too. 'Even if I could make it sound good, I wouldn't. You needed a night like this,' he said. 'You needed to know what it feels like to fall on your face.'

'What?' Mitchell half-rose to his feet, then caught himself, as if he was suddenly aware of who he was speaking to.

'You can't succeed without tasting failure,' Patterson said. 'If you never fail, you never get to find out what you're made of. So. What are you made of, Mitchell?'

Mitchell shook his head, his hair shaking and dancing, somehow as dejected as the boy.

Trevor tossed his own hair over his shoulder and lit a cigarette as he watched.

'Are you tough enough to suck tonight up, learn what you can, and move forward? Or is the band over now that you broke your guitar?'

'What am I supposed to play? You can't be a guitar player without a guitar.'

'True,' Patterson said. 'Is that the only problem?'

Mitchell cocked his head as he thought. 'I've been trying to save up for another one, but it's not doing so well. I had to dig into it to pay for the latest run of t-shirts.'

'Not taking your investment back out?'

Mitchell shook his head. 'I figured it was worth it. Didn't think this sort of thing would happen.'

The boy grimaced. 'I figure out how to get a new guitar.'

'We'll steal you one if we need to,' Trevor said with a shrug. 'Sorry, Dad. You didn't hear that.'

'That's true. I didn't.' Patterson paused, noticing that Trevor had started to fade into the shadows.

Mitchell turned to Patterson. 'I want this.'

'The band. A new guitar. Hell, a better guitar.'

'Fame, fortune, and all the rest?'

Mitchell grinned at his father. 'You betcha.'

'Then, son,' Patterson said, turning to him. 'You know what it's going to take to get there.'

'Yeah,' Mitchell said, wiping a hand over his face. 'A shitload of work.' He stood up and fumbled in his pocket. 'I'd better get busy. Trev, you ready?'

'To do what?' Trevor eyed Mitchell and looked ready to bolt. Patterson bit back a smile. Getting that particular boy to do anything he didn't want to was impossible.

'Go home and get some sleep,' Mitchell said, possibly the only thing that Trevor wouldn't rebel against just for the sake of rebelling. 'We need to find me a new guitar.'

Patterson held out his hand, palm up. 'I'll drive. You two can start plotting.'

With a grin that said it all, Mitchell handed over the keys."

Already got the book.

When TT first disappeared I was horrified. So much of what I get out of my blog started there. I, too, am very glad to see it's still going.

My 13 is about reviews of my book. Perhaps I could add your review? :) How do you take submissions?

I'm with Alice about the importance of T13; heck, isn't how you and I met, Julia??

Anyway, thanks SO much for doing this, lady. You blow me away with your dedication to getting the word about great books out there. (and I've linked this to my reviews page, of course!)

It's nice to read the origins of the characters, thank you for sharing this!

Wow, I'm not even half way through the list of thirteeners and already 2 new must reads to my list. Great 13!

I saw the new site this morning. I'm happy that the TT'ers have new headquarters. Enjoy.

You are a very very sweet woman.

hmmmm ... I've been looking for something to ready while I'm on vacation. This sounds like a good read.

I really want to read this. It sounds wonderful.

I have the book, too. :)
I've also met so many wonderful people through TT. I just kept going like the Energiser Bunny.

Great way to promote a book and thanks to your tidbits that made me laugh - corned beef to get the green out of hair, omg, rofl! It might put more green in being's how it's an Irish favorite food!

I actually posted about food (I was hungry when creating my TT list and couldn't focus on anything else!) But I did post the food as free fun and colorful recipe cards!

Happy TT and thanks for pointing me in the direction of Susan's writing!

That's an unusual title. For that reason alone I like it.

Nice use of the format. And this is an intriguing book.

Carmen - can you email me at julia.smith2@gmail.com?

Sorry for being so late stopping by!

What a fabulous review of the Demo Tapes! I am hooked on Susan's fictional world and her characters. They're people I'm always happy to spend time with.

Kudos to you and kudos to Susan!

How fun to write this review as a Thursday Thirteen!

I loved The Demo Tapes, too!