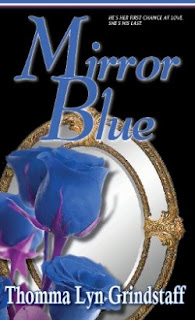 I met Thomma Lyn Grindstaff in the comments section of fellow writing-life bloggers, and eventually found myself addicted to her posts about her daily hikes up her East Tennessee mountain, complete with you-are-there photos.

It's easy to rejoice with her when she encounters tadpoles evolving in a mountain stream, when she discovers rare ghost flowers deep in the forest and to be patient if she doesn't blog for a few days. I know that means she's working on her next story, so it's all good.

1 - Mirror Blue is a Literary Love Story imprint from Black Lyon Publishing, released in May 2009. It is available in both Ebook PDF format or as a paperback.

Her unofficial debut was actually a story called Thy Eternal Summer. She sold it to an e-publisher that folded not long afterwards. Did Thomma Lyn let that get to her?

3 - Being published was just a matter of time for Thomma Lyn. "I recall when I was eleven years old," she writes, "and a teacher asked my class to write an essay about what we hoped we'd be doing as adults. I wrote that I wanted to be a novelist. Writing has always gone hand in hand with reading, and I can't remember a time when I wasn't in love with words."

4 - Her readers get to bask in her lifelong passion for words. Mirror Blue is pearled with poetic gems like "Her crush on Isaac had turned into a sword, and she'd cut her hands fondling the blade."

By the way, all I had to do to find that line was to open the book. It was right there on the first random page that opened up. Page 40, if you must know.

5 - We meet Aphra Porter, child of hippy philosopher parents, a southern woman who designs web sites and has had a crush on writer Isaac Lightfoot since her teens. She can't believe she's in a fan girl line-up at one of his book signings. She can't believe how she feels when he looks her straight in the eye and talks to her long enough to make the line-up behind her get fidgety.

6 - Isaac Lightfoot, decorated Vietnam vet with his Silver Star and more than one Purple Heart tucked away in a shoebox, can't believe his luck. Not only does the enchanting woman whose fan letter he remembered after all these years show up at his book signing, but she mentions that she's a web designer. His current author site sucks. It certainly isn't hard to find her on the web - how many people are named after a goddess?

7 - I really, really love the heartbreaky tone to this love story. I know, I know - quelle surprise.

Once these two Harley Davidson riders take their first ride on the open road together, their romance begins. But there is a 20-year age gap between them, not to mention Isaac's 30-year relationship with his former wife and the ghosts of combat past that rear up in the night. Aphra struggles to convince herself that she's not in over her head, and Isaac fights to make his spoken words as compelling as his written ones when Aphra keeps retreating from the onslaught of Isaac's complicated baggage.

"They were, each of them, famished for the other. This, Aphra realized, was what was missing from her lackluster, poor liaisons: this need, licking along the surfaces of her bones like thick liquid being heated."

9 - She intertwines a subplot concerning Isaac's grown son, Aphra's sister and the impending bundles of joy coming to each of them. With Isaac past child rearing and Aphra insisting she was never interested in the first place, all the exposure to families starting up makes these lovers question the impact a childless life would have on the other.

10 - Thomma Lyn really knows how to end each chapter with a hook. Like this, for example:

" 'What about Cheryl, his wife? How does she fit in?' said Aphra.

'But she seems so quiet and mousy.'

'She is quiet and mousy, and yeah, Norma's got a mouth on her like a siren. But they're the same type of woman under the surface: cold, manipulative and self-centered. They thrive on attention. Same song, different dance. I hate it for Sam. I really do. But it's what he's used to in women, it's what he grew up with.'

'Be up front with me, Isaac. Are you sure spending time with me won't bring too much stress upon your head? You'll be dealing with aggravation all around: from Norma, from your mother, and from Sam. Do you really need that, at this point in your life?'

'What I need is you. And as for stress, that's a laugh. You're forgetting who you're talking to. Norma's shenanigans are nothing compared to a nest of NVA snipers. Remember that.'

11 - At just under 200 pages, Mirror Blue looks like it would be a quick read. But Thomma Lyn's language is so rich, her novel must be savoured like a dark chocolate dessert. Pull up a chair, stir your coffee or tea and sit a spell. This is a character-driven novel with its own pace.

12 - Check out my my interview with Thomma Lyn which appeared here at A Piece of My Mind just before her May 1st release date.

"One shadow separated itself from the rest of them and crabbed across the doorway of her bedroom. It was too big to be one of the cats. But if it was Isaac, he didn't make a sound.

Aphra reached for the lamp on her nightstand and flipped it on. Maybe no one was breaking in and Isaac wasn't pining for his ex. Maybe he was in the kitchen making a sandwich.

She didn't have to go far to find Isaac. Six feet from her bedroom doorway he appeared, looming over her. She didn't hear him coming, nor did she see him, until he was there. She had a quick glimpse of his face in the light that spilled over from her bedroom - stony eyes, an unrelenting jaw - before he had her in a headlock; her back was to him, and she didn't remember him turning her around. He was fast, big and strong. And he could break her neck like a twig.

She let out a squeak; it was all she could manage. He abruptly spun her back around and pressed her up against him. 'My God, it's you. You startled me. Oh, please forgive me. What a sorry-assed son of a bitch I am!'

He held her tighter. 'Look at you, I've scared you half to death. Did I hurt you, honey? God almighty, I'm sorry. I woke up crazy-headed, plumb off my rocker.'

She hugged him back and nuzzled his chest. 'Do you mean you had a nightmare?'

'Not a nightmare, at least not one I remember. All I know is I woke up in a cold sweat. I felt like something awful was going to happen. So there I was, looking for potential ambush sites and figuring out the best defensive positions against them. I don't know what got into me, but I know it hasn't gotten into me for a long time.'

'Are you saying you do this often? Wake up and go into battle mode?'

'It used to happen pretty regularly. Not any more. Mostly when it happens these days, it's triggered by stress.'

Join me next week when I tell the incredibly romantic tale of two east coast girls and their Russian sailor adventure - as the Tall Ships arrive in the port of Halifax for Tall Ships 2009!

Devilish Southern Belle says You've piqued my curiosity - I may just have to get this book!

You've piqued my curiosity - I may just have to get this book!

I am so going to look this up. Very kewl. Thanks for sharing. Happy T13!

Julia,
You're a wonderful reviewer. You've sold me on this book. I'm going to look for it. Thanks. See ya next week!

I love how you describe TL's work like dark chocolate that needs to be savored. Exactly. That's right on the money, I'm not eloquent enough to think of that.

Of course when most of your brains seems to be leaking into your breasts it's hard to be eloquent. LOL!

Alice Audrey - I'm so excited for her!

AD - Glad you enjoyed it.

Brenda ND - I only review the books I like, so it's easy to write a review!

Amy Ruttan - Of course when most of your brains seems to be leaking into your breasts it's hard to be eloquent.' - LOL!!

Oooo Fantastic!!!! I love how THomma Lynn bounced back. This looks awesome.

Interesting story, I can see why you love her.

Such determination toward her love of writing. That's how you turn your dreams into goals and make them reality!

You're a darling. This the best review so far. I loved Mirror Blue when it was a manuscript. I loved it even more when it was finally printed. Its characters live forever in my heart. Thomma Lyn makes it so easy to fall in love with Isaac. And you're right; each word of this book is a treasure. Poetic, thought provoking, and lingering in the mind long after the last page has been turned. I just may have to sit down and read this story again.

Another great review, Julia. I'm going to have to check this one out.

You make me want to pick this one up!

Wishing her many sales!

Thanks for visiting my blog yesterday. *g*

You've done it again, Julia. I think you know that.

What a champion for books and literature you are. I'm in awe.

Thank you, Julia, from the bottom of my heart for this lovely review. :)