For the past two weeks, Anni over at Hootin' Anni's has posted really fun looks at the characteristics of the people who live in two of her home states, Colorado and Texas.

Here's my version - You'll Know You're From Nova Scotia when: 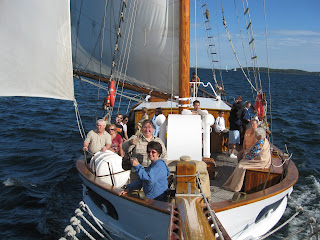 1 - You describe your home province as Down East, Down Home or Up Home. As in, "Yeah. Yeah. I went out west for a couple years, but my brother-in-law heard about a job opening up, so I flew Down East for the interview and I got 'er."

2 - You're genuine and friendly to visitors, but your confusing mark of true affection: the more you admire someone, the more ruthlessly you'll tease the poor dear.

3 - As someone from a province with European settlement dating back to the early 1600's, you're not that keen to embrace change. "But this is the way we've always done it," you'll say.

5 - When following along in conversation, you indicate your agreement by saying, "Yeah, yeah, yeah," while inhaling.

6 - If you're making a day trip between Yarmouth and Meteghan to shop at Frenchy's (the used clothing store, where tossing clothes aside in the table bins is an art form) you say that you're "going up the line."

8 - If you're using plastic grocery bags to carry anything other than food, you've pulled out your Cape Breton Luggage.

12 - While others say they're going to their cottage for the weekend, you say, "I'm heading down to the camp." Even though the 'camp' is definitely a cottage.

For a comedy version of the Nova Scotian accent, here are a few snippets from the Cape Breton Summertime Revue, featuring Bette MacDonald and Maynard Morrison.

Janet says As a "Come From Away" I got a big kick out of them - and recognized many!

Wylie Kinson says I could for sure do a similar list for Northwestern Ontarians (sooo different from those in the south) only much shorter. Beer + Trucks + Snowmobiles = Thunder Bay. LOL

Jennifer Leeland says I am TOTALLY stealing this idea and doing 13 ways you can tell you're from Humboldt county. LOL. This was AWESOME!

These are absolutely fabulous, Julia. As a "Come From Away" I got a big kick out of them - and recognized many!

Can I suggest another? The back bench seat of your van, positioned on your deck for summer visitors, is the Cape Breton Lawn Furniture.

Thanks for the chuckle this morning :)

Wow, we sound uneducated with all those 'me arse' and 'me nerves' and 'right some good'. I don't remember talking like that! And I've never heard of 'drive 'er', we've always used 'give 'er'. And the difference between a camp and cottage is simply that the cottage has the bathroom indoors, the camp has the bathroom located some distance away in an outhouse.:)

Oh this is cool! I haven't been to Nova Scotia. Now if in the future I'll be able to visit then I know what to expect :)

Nice list. I don't think I've ever known any one from Nova Scotia.


Have a great Thursday!
http://iamharriet.blogspot.com/2010/01/is-there-anything-growing-in-your.html

That was fun. Enjoyed it.

What a fun list--I have a friend from Nova Scotia and I'll try these on her.

Well, that helps me understand Sid a bit better. But the whole thing about the teasing? Doesn't explain why our friend from Knoxville -- heck, both my friends from Knoxville, come to think of it -- do exactly the same thing. Tease me mercilessly (not that I don't deserve it, just that ... well, darn it, they make me laugh. A lot.)

Julia - what a fun summary of you Easterners :)
I could for sure do a similar list for Northwestern Ontarians (sooo different from those in the south) only much shorter. Beer + Trucks + Snowmobiles = Thunder Bay. LOL

btw - we call them CAMPS too (no matter what the plumbing sitch is). Cottages are for snobs ;)

Hey, Wylie - I'm so glad you mentioned the 'camp' versus 'cottage' thing. My husband's from Geraldton (being from Thunder Bay, you would know of this isolated northern town) and that's all he calls them, too. Myself, being from northern Saskatchewan - we called them cabins (Going to the cabin this weekend) no matter what the plumbing facilities looked like - most were the kind where you hoped you could hold it).

Sorry, Julia, for highjacking your blog comments, but I had to acknowledge a fellow Northern Ontarian (being I'm married to one).

I am TOTALLY stealing this idea and doing 13 ways you can tell you're from Humboldt county. LOL.
This was AWESOME!

PS M's still sick, but hopefully gaining on it.

Oh my god Julia, that was so funny!!! I'm planning a trip with some friends this April to be "goin' down the line" and that is what we ALL called it!!! Love it:)

Julia, this is great. You see I am "from away" still even though have been east now for 11 years!! I have picked some of this up,particularly the "some good". How great is this, Julia, Bravo !!