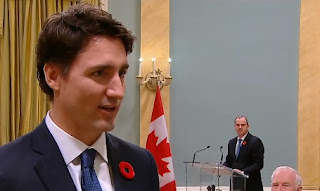 Today is a very special day on so many levels.

If you're Canadian, you already know why the bells have rung with joy throughout the land.

If you've come to A Piece of My Mind from Blog4Peace, there's a reason that Canadians are celebrating with tears of relief and wide-beaming smiles of hope.

It's impossible to go into details about this without turning an apolitical peace movement into something its founder, Mimi Lenox, would prefer to keep aside for this special day.

I will simply say that for a country made up of two genders and of people descended from many ethnic groups, as well as sending representatives from six distinct regions, the cabinet ministers sworn in alongside Trudeau today at last reflects Canada's citizens in a way that's never happened before.

As well, Canadians were invited to witness the swearing-in ceremony in a spirit of openness that has been completely absent in Ottawa for the past nine years. In fact, this ceremony has never before been witnessed by the public. There was limited space inside Rideau Hall for the event, so large-screen tvs were set up outside to broadcast the speaking of the oaths, to cheers of delight that filtered inside at several key moments.

For this year's Blog4Peace, I'm posting a song that captures the spirit of today's swearing-in of a new government in my nation's capitol, a spirit that so many of my fellow Canadians share with me.

Many changes in government begin with promises and end in cynicism. My husband and my mom watched the ceremonies with me, and it really touched me that my mom became more and more excited as each new cabinet member came forward to swear the oath. She has seen more parliaments than me, and she said today that she's never seen a group of people that exuded such a sense of dynamic change. The simple yet profound difference of having an equal number of male and female cabinet ministers was something I don't think my mom had ever thought she'd witness.

The reason I've wrapped this year's post around a political celebration has its roots in the mean-spirited tone of the campaign run by the outgoing government, in contrast to the optimistic tone of the incoming government. There's a relieved sense in Canada that we've somehow managed to pull off a revolution without having to fire a shot.

My deep and grateful thanks go out to my fellow Canadians for showing up in record numbers on voting day. With Remembrance Day / Veteran's Day coming up, Canadians have shown that standing up for your country doesn't only mean serving in the armed forces. Peacefully showing up to vote can mean all the difference. 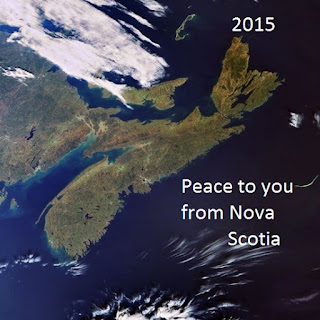 What a blog post! Seeing the details and hearing how it all works, well, that is exciting. Thanks for sharing that bit of new history.

Wonderful post, as a fellow Canadian I relate. We join you today in blogging for peace.

Peace to you and yours and all of Canada!

As a fellow Canadian, I could not agree more happily with every word you have written. A new day is dawning on a kinder gentler Canada. YAY! I so agree with what you say - about showing up to vote and having pulled off a revolution without firing a shot. LOVE IT!

Yes indeed, peace is about embracing change. More great wishes to you and your countrymen!

I am not Canadian, but I feel in your words how peace and politics can work together for the public good. Best wishes to you all in your new world.

It is so great to see the regulars back for another year. Cheered along with you from below your southern border over your election.

A wonderful Peace Post as always my friend. Peace to you and yours. Xx