Akelamalu opened this meme up for all takers awhile ago, so here's my version.

How long did you date? Well, this is a two-part question for us. We met when we both worked at a movie theatre in Toronto. We became very close friends, but both of us had a history of having strong friendships with the opposite gender. Neither of us had the idea of going out with one another. All of a sudden that changed about two years after we met. 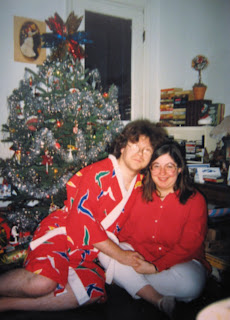 Once we realized we were actually - could it be possible? - in love with each other, we got engaged a year later, and were married almost two years later. It was five years between our first meeting and our wedding day.

This picture was taken in our first apartment together, where Brad moved in with myself and my roommate Dave. I used to be the nanny for Dave's niece. This was Christmas 1990. 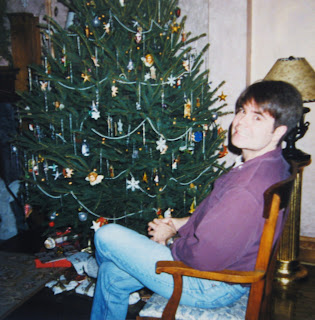 This is Dave. This was taken on Christmas Eve 1995 over at his sister's house - the house where I was the live-in nanny. We were over there for a Christmas Eve visit - Brad and I, my sister, my mom who was staying at my sister's on a visit from the east coast, and of course Dave, and the hosts Donna (my former employer and good friend) and her husband Rob.

Who eats more? We both have a great appreciation for the culinary arts. 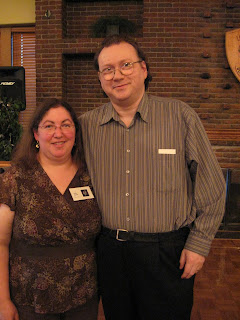 This was taken at my 25th high school reunion last summer. 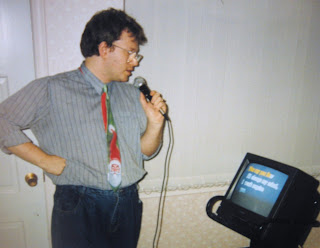 Who sings better? Although my family is very musical and we have many singers among us, when I attended the first Smith birthday and they started singing Happy Birthday to you I was bowled over by what great voices they have.

This is from Christmas Day 1992 at Brad's parents' place, where Brad's brother Jeff set up his karaoke equipment and we had a ball taking turns singing. Here Brad belts out a tune. 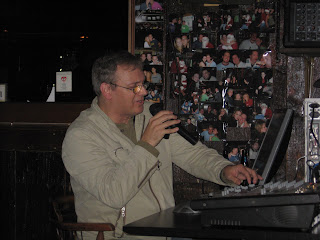 This is Jeff singing at his karaoke show at The Old Sod Pub in Etobicoke, west Toronto last October. Jeff has an incredible voice with a huge range. If there's a gap between patrons, he'll sing until the next one is ready for their spotlight. 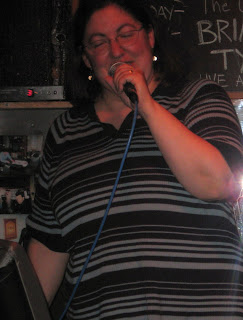 
If you want to drop in on one of his shows, check out The Old Sod's schedule and say hi for me!

Whose temper is worse? Both of us are pretty easy going. If we are stirred to anger, both of us can give the death ray stare. We're Scorpios. Luckily, we seem to recognize that we're equal adversaries and leave it at that. The Scorpio thing gives us an ability to sense when the other is troubled, so we never seem to get worked up enough to get mad in the first place.

Who does the laundry? We share that out. He'll wash the clothes in the machine and I'll hang them to dry, either on the drying racks inside or out on the clothesline.

Who does the dishes? We both try to avoid - um - doing the dishes. So we both end up doing them.

Who sleeps on the right side of the bed? Brad does.

Who pays the bills? We share that, both financially and practically.

Who cooks dinner? We basically fend for ourselves. We have different schedules, so he eats when he needs to and so do I. If I feel really horrible, he fixes me dinner, and I do the same for him. 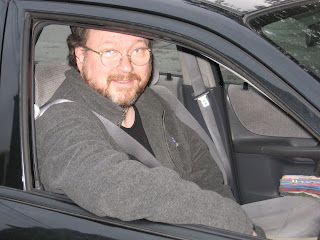 Who drives when you are together? Brad doesn't have a driver's license - never has. So I'm the driver. We're mostly public transit riders.

Here's Brad in the passenger's seat of his brother's car. 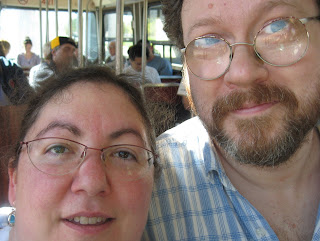 This is Brad and me on the Queen streetcar heading into downtown Toronto last fall.

Who is more stubborn? I am. I'm Acadian, remember? I'm positive there is no other cultural group more stubborn than Acadians.

And you'll never convince me otherwise.

Who asked who out first? Brad did. Basically, he's the one who turned our friendship on its ear and set us on our new path.

Who kissed who first? Brad got in my way as I was heading upstairs at his parents' place, where I was going to the guest room for the night. As Brad's closest friend, I often stayed overnight on the weekend in the guest room after we'd stayed up nearly all night watching movies on TV.

But one night he just stepped in front of me and kissed me. And the rest is history.

Who proposed? Brad proposed as we ate the Thanksgiving dinner I'd prepared for just the two of us in our first apartment.

Who is the first to admit when they are wrong? We're both very diplomatic and don't hold onto the anger when it flares up.

Whose parents do you see the most? Well, we live with my mom, so I'd say mine. When we lived in Ontario, it was Brad's parents. Geography plays the big role in that.

Who is more sensitive? Brad is more sensitive, due to his bipolar disorder. Other than his mood swings, Brad's actual character is quite solid and not overly sensitive. And I am very grounded. I don't worry about too many things. 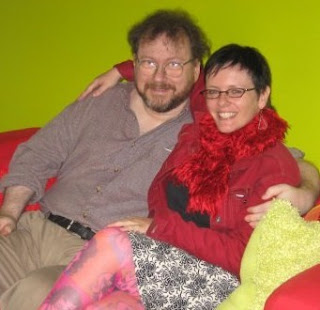 Who has more friends? I have a lot more friends, again because of Brad's bipolar disorder and his tendency towards agoraphobia. But considering that, he has a wide network of true and long-lasting friendships that is really rare for a bipolar person.

This is Brad with his friend Andrea that he went to The New School of Drama with. She was his attendent of honor at our wedding (the 'best man', if you will.) 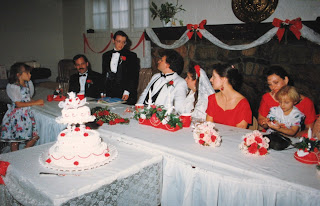 This is Andrea giving her 'best man' speech at our reception, which was actually a reading of Oh, The Places You'll Go! by Dr. Seuss.

So be sure when you step.
Step with care and great tact
and remember that Life's
a Great Balancing Act.
Just never forget to be dexterous and deft.
And never mix up your right foot with your left.

Photo, L to R: Our niece Christi who got married this summer on our wedding anniversary, Brad's brother Ken, Andrea, Brad, me, my best friend Connie, Brad's sister Karen and our niece Emily

Who has more siblings? Brad has more siblings. He's the youngest of four, and I'm the oldest of two. However, my sister and I grew up so closely with my two cousins, that we all feel as if we are more like siblings than cousins. 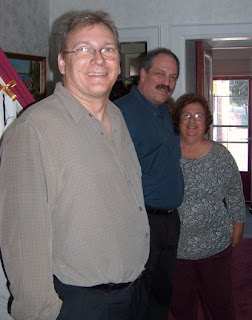 These are Brad's brothers, Jeff and Ken with their mom, Joan at her 50th anniversary celebration last October. 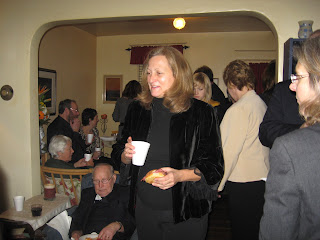 This is Brad's sister Karen with a very full house following their dad's funeral this past January. We really enjoyed this time together - she still had a crowd five hours after we gathered in her home. 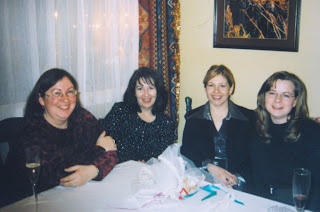 This was taken on Christmas Eve 2002. I'm here at left sitting at my aunt's house with my cousin Julianne, my sister Michelle and my cousin Charlie's wife Heather. 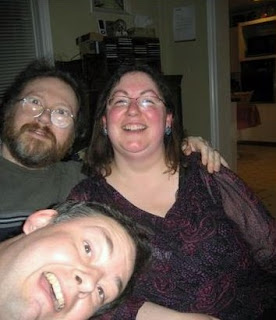 This was taken on Christmas Eve 2007 - Brad, me and my cousin Charlie.


Who wears the pants in the family? I don't wear skirts very often - does that answer the question?

I so enjoy when someone talks about someone they love - whether hubby, children, friends. Makes me feel warm and hopeful.

Looking forward to seeing you at lunch.

You did a great job on that meme Julia, much better than I did with all your photos and info. Interestingly MWM and I are both Scorpios too! Not a match that's supposed to work but it does, doesn't it? :)

You didn't tag me but I'm doing up a post on this at Six Degrees.

Julia,
It was so nice to meet your hubby through your lovely words! You guys sound like a perfect match!

Love the hot pink tights. My hubby and I have been together since 98.

Awwww, *warm fuzzies.* I loved reading your meme. Sounds like you and your hubby have something really special going! :)

Great meme, Julia. I love the story of your first kiss. So romantic! :-)

FYI, not sure how often you check, but I sent you a couple of messages through FB.

julia - thanks for sharing a piece of your wonderful marriage. I enjoyed hearing of your journey together.
Tell Brad I like him better without the beard... why cover up such a cutie face? ;)

Oh what fun! Thank you for the Tag, and the fun picture of Charlie at the end of your post. I'll get to work on a post for this week.

Heather - I love that picture!

What a fun meme to read through. I'm off to Tucson tomorrow, so I'll get my post up when I return. Wish me icewater, 'cause it's going to be over 100º every day we're there. OUCH!
Blessings,
~Toni~