Off to the Ballet Tomorrow - Won't You Join Me? 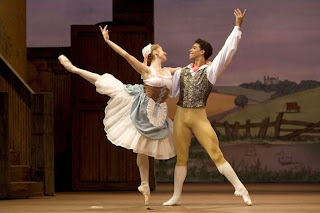 This picture has been my screensaver at work for the past month, as I've waited and waited for tomorrow to arrive. I'll be going to the ballet, courtesy of Empire Theatres and their Opus Arte in HD program.

If you live in Canada, the major cities host an HD broadcast of the ballet at the movie theatre, at 1:00 pm local time.

The ballet tells the story of country sweethearts Lise and Colas resisting the attempts of her mother to marry her off to a wealthy suitor. It's a light-hearted comic ballet that celebrates rural life while featuring complicated pieces like the ribbon dance (harking back to May pole celebrations.)

I'll have a review of this ballet posted for my arts feature, Through the Opera Glasses this coming Tuesday. You can check out my previous posts featuring the broadcasts of these ballets through the Opus Arte Empire Theatres program:

Well, I'm missing it because it's 3p.m., London time. It's funny, I live right behind that Cinema.

I am not kidding you, two minute walk.

I love dance but I've never been to a live ballet. I need to correct that lack.

Amy - I'm going to give you lots of warning before the next one. It will be 'Manon' at 1:00 pm on Sat. Feb. 28th. And I'll post a reminder, too. It's $22.00 - a massive saving compared to live theatre tickets, trust me. The cheapest cheapie ticket for The National Ballet of Canada is $20.00 for a seat way at the tippy top for a matinee. And 'Manon' is very dramatic and tragic. With an absolutely moving pas de deux (love duet dance) that gives me shivers just thinking about it.

Travis - I've noticed how much you love 'Dancing With the Stars' - you should give ballet a try. I'm trying to figure out if you'd be more of a modern dance fan or a traditional classical ballet fan.

Check out In the Middle, somewhat elevated, a William Forsythe piece from 1987 starring French dance superstars Syvlie Guillem and Laurent Hillaire. This is modern or contemporary dance.

Check out The Sleeping Beauty, choreographed by Marius Petipa who set most of the classical ballets you can think of, including 'Swan Lake', 'Giselle' and 'The Nutcracker'. This clip features Russian dancers Diana Vishneva and Vladimir Malakov. Their performance in this clip is as good as it gets for this piece.

I've seen a few live ballets and adore the classical style (not so much the moderne). My all time fave was Sleeping Beauty.

And can I just say that your choice of screen saver was, um... inspiring *hee*
Yes - my mind is on those LEGS (not hers)

Wylie - Carlos Acosta is good for whatever ails ya. He was marvellous, and Marianela Nunez (from Argentina) was a perfect combination of delicacy, strength and wonderful acting. The art direction choice of rich pastels was really superb.

I'll be posting a review for my arts feature Through the Opera Glasses on Tuesday.

I'll await your review on Tuesday. I hope you had a great time. :)

I lοѵe your blog.. vеry nice colors &
thеme. Did уοu design this websitе
уourѕеlf оr dіԁ you hiгe someone to do it fοr you?
Plz аnѕwer bаck аs I'm looking to construct my own blog and would like to find out where u got this from. many thanksBob's Burgers Sеаson 3 Еpisoԁe 5 Free Ѕtream
Feel free to visit my homepage ... Bob's Burgers Season 3 Episode 5 Free Stream