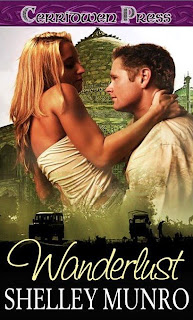 As I've blogged my way through cyberspace these past two years, I've had the pleasure of meeting several people who I now consider to be friends I have yet to meet in person. Shelley Munro is one of them.

1 - Shelley is a fabulous blogger. You can find her at Adventure Into Romance With Shelley Munro. She posts engaging writers'-life commentary without fail, even while she's on a mega trek with her intrepid husband for 6 weeks. Not only is she a prolific author - 32 e-books and counting - not only does she post regularly and unfailingly, but she visits her blog friends faithfully. My heart always brightens when I see her name in my comments page.

3 - Wanderlust is written in first person, and when you keep in mind how much of the world Shelley has seen personally, you'll understand why that was a natural fit for this novel.

4 - Part of Cerridwen Press's Romantic Suspense category, Wanderlust gives us a heroine who lives her dreams of travelling the world while keeping a safe distance from her parents, who can't seem to live with or without each other. The hero is a man who gets dangerous jobs done, whatever border needs to be crossed. Even if that border is the line around a woman's heart.

5 - We meet Anna Tietjens, a mid-twenties woman who shepherds tourists across overland routes in less-discovered areas like India. It's her birthday, which would be nice to celebrate - but her co-driver has just come down with malaria, more passengers are about to join the tour, including her dear sister who makes her teeth grind at the best of times, several male passengers are convinced they'd make beautiful music with Anna if they refined their come-ons slightly, not to mention having already lost one of her tourists to a fatal accident in Syria. Happy birthday, indeed.

6 - Sebastian Brady wisely made his reservation with Wanderlust Adventures under a different name. Otherwise Anna would never have agreed to take him aboard. He knew she relished their passionate rendezvous but kept him at arms' length - which fit in with his line of work rather nicely. Accountants' briefcases being such a fine place to stash guns, and New Delhi so perfect to slide through unnoticed in the marketplaces.

7 - Anna's home is always packed with fellow travellers, since she may as well call the modified Mercedes truck she uses for Wanderlust Adventures home.

Or she could call it Alice. Which she does.

8 - Anna's attraction to Sebastian spikes well out of her comfort zone with his unscheduled appearance. Her parents' miserable track record, and her own insatiable desire to see wildebeest migrating and cheetahs loping turns this tour into an emotional pressure cooker. Especially since this is the first time they've spent so much time upright and clothed in each others' company.

9 - One of the passengers suggests a game of murder to play along the route. Which seems like a good idea to a distracted Anna - until the accident victim back in Syria becomes only the first of her passengers to meet with an untimely end. Now murder is far from a movable parlour game. And Anna's mystery lover with the accountants' briefcase might be more than just a surprise booking on her ill-fated overland tour.

10 - Shelley really knows how to end each chapter with a hook. Like this, for example:

'You can talk,' Sebastian said. 'Weren’t you the one who tied my hands so I couldn’t touch you?'

Okay, he had me there. I’d done that once in a hotel. 'I didn’t realize this was about payback. Besides, you didn’t stay tied up for long. You freed yourself before I finished.' My knots hadn’t stood up to mercenary training.

'You tie knots like a girl,' he said, shaking his head and chuckling at the memory.

'In case you haven’t noticed, I am a girl.' I ran my fingers across his nipples until they stood out small and tight. The groan I dragged from him was an added reward. I loved to know I could tease him, get him to react. 'You know what I think?'

'Nah, but you’re going to tell me,' he said, his lips quirking in a touch of humor.

I grabbed his ears and tugged lightly. 'Smart-ass.'

Sebastian laughed. 'Maybe I should make love to you more often.'

'Keep you under control,' he said. 'You purr like a kitten after we’ve made love.'

'I do not.' Indignant, I pulled away.

His brows rose but the grin never faded. 'And when we’re not making love, you’re like a wild cat. Unpredictable. I never know how you’re going to react. It makes for an exciting relationship.'

My mouth flapped like a fish but wisely I kept my thoughts to myself. We weren’t in a romantic relationship. I didn’t do relationships at all."

11 - Shelley's personal experience travelling through India gives every moment of this novel an authoritative voice. The noise, the crowds, the colors, the smells, the mannerisms of the locals - everything and everyone is blissfully authentic.

12 - Wanderlust has a large cast of characters and a Miss Marple vibe to further complicate the lovers' relationship. This story is as dense and vibrant as the Indian tour stops, while Shelley keeps Anna's romance with Sebastian simmering in the foreground and the suspense storyline humming to the very end.

13 - I leave you with an excerpt from Wanderlust. Enjoy!

"We arrived late and set up camp up few miles from the World Heritage-listed Ellora cave temples just before dusk. Even though we were in the middle of nowhere, the bush telegraph worked efficiently and locals appeared, silently slipping up to our newly claimed campsite to watch. By the time we’d set up the tents and the cooks had dragged out the tables and started to prepare the evening meal, there was a semicircle of mainly males watching us intently.

'I feel like a goldfish in a bowl,' Elizabeth said. 'Shoo. Shoo! Don’t they have homes to go to?'

'Part of the overseas experience is interacting with the local people,' I said.

'There’s nothing wrong with shopping,' Elizabeth said, her tone defensive.

'Sweetheart, of course there isn’t.' Jack grinned and reached over to snatch a quick kiss. I watched in fascination when all the fight seeped out of her.

'Not when you have two males to carry parcels for you.' Rosa gripped the knife she was using to chop potatoes a little more firmly, her snide tone not carrying past her fellow cooks and me. She used so much force in her chopping that one of pieces shot off the table and hit AJ in the back of the head.

'Ow!' she howled, rubbing the back of her head. 'What did you do that for?'

'Oh, oh! She got me.' Elizabeth dropped to the ground in a ladylike swoon. 'I’m dead,' she said before closing her eyes.

'I wish,' Rosa snapped. Another potato shot off the table, this one falling to the ground.

'I heard that,' Elizabeth said, opening her eyes and extending a hand to both Jack and Carmichael to pull her up. 'I don’t think that’s very nice considering what happened to Guy.'

'Oh, and you’d know all about nice,' Rosa sneered.

'That’s enough,' I said hastily. The last thing I wanted to deal with tonight was a catfight. 'Do you think it’s a good idea to continue with the murder game?' I asked, in a feeble attempt to change the subject. Murder wasn’t a good topic either.

I closed my eyes, my heart pounding. Jeez, did he have to put it quite that way? Snuffed it.

Rosa tossed her head and the silver blade of the knife flashed in the lights we’d set up so the cooks could see what they were doing. 'Two murders if you count Sam. And of course Antonia, but that was a bit different.'

'Don’t think it will catch on,' Sebastian drawled, his tanned face a picture of lazy humor."

Funny that you posted this today. I woke up thinking about Shelley.

I love Shelley. She's wonderful in person as well.

I loved Wanderlust, I live my travel fantasies vicariously through Shelley's accounts.

As always, Julia, I love your take on books.
This was FABULOUS!!!
I love Shelley. She ROCKS!!!!

I have awarded you the Lets Be Friends Award:

Have a great day

Thanks so much for the wonderful post, Julia. Hugs. I enjoy your posts so much and it feels really special to be included in one. :)

Ooh! I hope it was good thoughts, Susan.

Amy - *grin* thanks! I am quiet though, remember? LOL

Her books are as terrific as the lady herself :)

Ahhh Shelley you may be quiet but you're still fantastic.

I did have a giggle that night we were approached by the crazy man in the back alley of SF and you were cold, and the rest of us Canucks were sweating. :)

LOL - I remember that crazy man. It was cold! I'm from Auckland. We're subtropical. :)