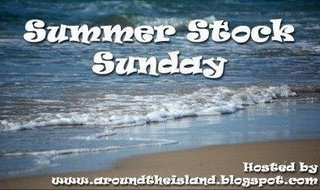 If you've been following my tale of my sister's once-upon-a-magical-summer-romance (scroll to previous post) you'll recall that my last glimpse of the Russian tall ship Kruzenshtern was in 1984, as she sailed out of Sydney harbour in Cape Breton, Nova Scotia.

It was the first tall ships event here in Nova Scotia, and my sister had fallen for a sailor aboard the Kruzenshtern - a hard thing to do, when you recall that in 1984 the crew was monitored at all times by Soviet authorities aboard ship, and the cadets were kept in groups if they went ashore, and kept aboard at all other times. 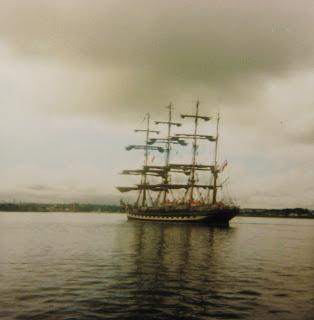 It was painful to say goodbye to Rashid Kamalov, a cadet from the marine college in Kaliningrad. That's him at left with a fellow cadet on that last morning, when my sister and I drove onto the wharf with an official pass she'd gotten from a Canadian sailor so we could see them off. 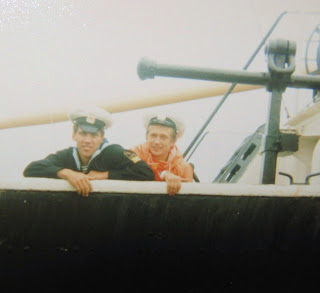 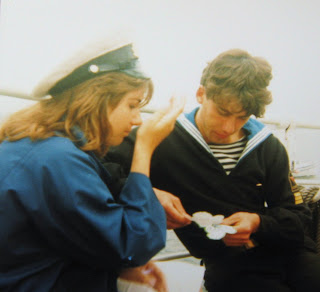 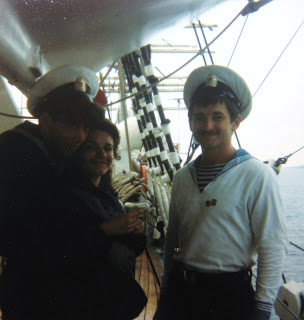 It seemed to take forever - but finally an air mail envelope arrived in our mailbox.

It was from Rashid.

My sister had sent letters to all three addresses he'd given her: the college, his mother's and his grandmother's. But his mother and grandmother - being concerned, I suppose, for their son and grandson - didn't pass along the letters from a dangerous foreign girl in the age of the KGB. Rashid spent time at home after returning from his around-the-world trek thinking Michelle hadn't written to him. The letter my sister got whispered of the hurt he'd felt, while brimming with hope that she still might return his feelings.

Michelle wrote back, assuring him that all was just as it was when he'd left Canada. 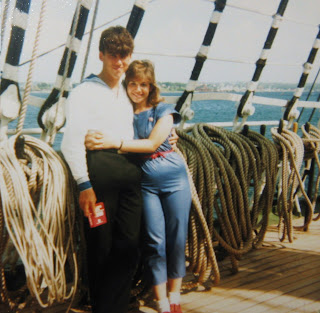 Finally he returned to the college - and a collection of my sister's letters waiting there for him.

Thus began a two-year correspondence between my sister and Rashid. We even obtained travel visas and planned a trip to see Rashid in his home town of Yaroslavl.

But one day a post card arrived, in Rashid's old-fashioned handwriting, telling my sister he'd been drafted into the Soviet army and would be there for two years. In 1986, the Soviet Union was deep in their war with Afghanistan.

We've never heard from Rashid since. Our family moved from the address he had for Michelle. He was obviously no longer at the college. His mother wasn't a reliable contact. And very likely, he served in Afghanistan.

We've Googled him, naturally. Hunted for him on Facebook. I discovered there's a soccer player named Rashid Kamalov. Not our guy, of course.

25 years have gone by. My sister has found a partner in a truly wonderful man named Newt. 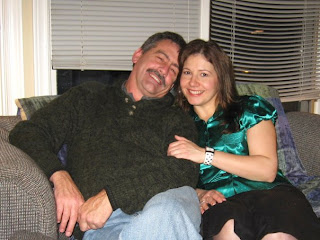 But there's always been a hanging thread dangling from that summer so long ago. Rashid has never left our thoughts. How could he?

So this past Thursday, when the Kruzenshtern once again sailed into Halifax Harbour for Tall Ships 2009, I made a beeline for the four-masted Russian barque.

When I rounded the corner by the park in front of the train station, and saw the huge masts high over the top of Pier 23, I literally grabbed my chest over my heart. 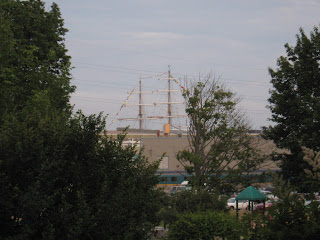 My sister and I are going aboard the ship tomorrow during public visiting hours. But I couldn't wait to see the ship - I went down by myself after work, happy to have this time to get close to such a huge figure from our past. 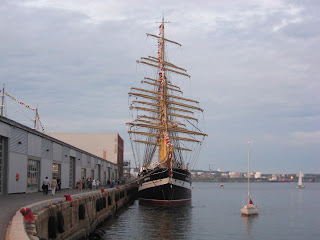 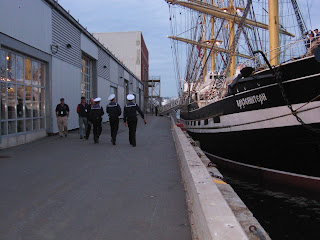 But look at the sailors! They're so cute. 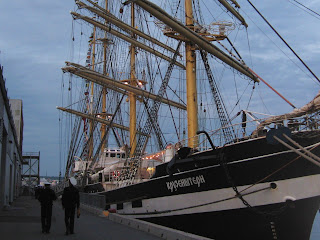 For more Summer Stock Sunday, visit Robin at Around the Island.

Ms Snarky Pants says Well there is one Rashid Kamalov on Facebook... Yes, I had to search. ;) Just call me a Facebook stalker, even in stories that have nothing to do with me. hehehe

Michelle Johnson says Surely the technology we have these days would yield something. Have you tried Twitter?

Mama Pajama says I am glad that your sister has found happiness...I hope Rashid has, as well!

my summer stock photo can be seen here

Well there is one Rashid Kamalov on facebook... Yes, I had to search. ;) Just call me a facebook stalker, even in stories that have nothing to do with me. hehehe This is such a sad story! I wish you at least knew what had become of him!

What an incredible story. I hope he's out there somewhere, happy and healthy.

I hope Rashid is okay and that you and Michelle can find him again. Surely the technology we have these days would yield something. Have you tried Twitter? Maybe when you go on board tomorrow you could ask someone from the Kruzenshtern if they could help you find him. After explaining the situation to them I'm sure they would like to help. Have a great day.

so fascinating, I too will now always wonder the where abouts of Rashid Kamalov,

Thank you so much for sharing this touching and personal story! I am glad that your sister has found happiness...I hope Rashid has, as well!

That is ready to be a novel - lovely story! Imagination is flying in all directions. Great photos and memories. May be one day he will find her - it is still slow with the Internet in Russia - not everybody has a computer there!

Did you try the Russian classmates site
www.odnoklasniki.ru
do you know his name in cyrilic?

Great love story, but just what are you going to do if you find the aging fellow? I hope it all turns out as you wish.

this is a touching story
and the photos are wonderful

Kaye - It was incredible to live it.

Ms Snarky Pants - I can't believe I didn't think to try different spellings!! Thanks for the tip - I'll let you know if that Rashid Kamolov responds!

Robin - We'll find out how we can contact him when we go aboard the ship this afternoon. There's got to be an alumni association for former crew.

Michelle - I did try Twitter but haven't had luck there. But Ms Snarky Pants' Facebook stalking technique unearthed a Rashid Kamolov, so we'll see...!

Heather - Hopefully it won't take too long to reconnect.

Mama Pajama - My sister has often said 'I hope he's found an Olga somewhere.' Wouldn't it be hilarious if he really did find someone...and her name was Olga...?

Glennis - We've been aging, too, don't forget! We just want to renew our friendship with him. He's a marvellous person and we want to know that he's okay.

Dianne - That really touches me!

I suspect that an alumni association is your best bet here. I wish you luck.

That's such a wonderful story, Julia, even with the sad ending. Maybe one day he'll turn up.

My sister and I boarded the Kruzenshtern this afternoon and had a fantastic time revisiting such a magnificent ship. We did inquire after Rashid, but he was not aboard. We hadn't expected him to be, but one never knows!

We will continue to search for him. In the new internet age, anything is possible. But we realize the very great possibility that he may never have returned from Afghanistan, if that's where he went.

So then what happened? Did anyone remember him? Did you find him?? Don't leave me hanging!!

Kelly - When we went aboard on Sunday, we asked a crew member if there was a Rashid Kamalov aboard - but of course there wasn't. We hadn't really expected him to be there. We're looking into contacting an alumni association for former crew of the Kruzenshtern. There's got to be a way...

Julia, I can't wait to hear more and find this such an exciting story!