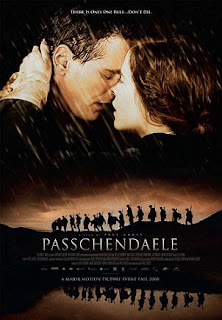 Passchendaele is the film-of-his-heart for multiple-hat-wearing star Paul Gross. He wrote, co-produced, directed and starred in this World War I drama about a Canadian soldier from the 10th Battalion, 1st Canadian Division who is good at soldiering but suffers from moral conflict over what that entails. He meets and woos a nurse while recovering from his injuries at Vimy Ridge, but must return to the grimy trenches of Belgium to fight for another few inches of blood-soaked ground.

I can't let Paul Gross down - not when I featured him as #6 on my 13 Canadian Hotties list.

This film was inspired by stories his grandfather told to Paul when he asked about his experiences in the war. Specifically, the distressing opening sequence - it's basically Paul's grandfather's life-defining moment. One that haunted him on his deathbed and confused family members when he asked forgiveness of a German soldier whom no one else but Paul knew anything about.

Passchendaele is a chapter in Canadian history that was never publicized at the time due to the army's need for new recruits. Who would join if they knew what living hell was really like?

"I fell in a trench," said Passchendaele veteran Harry Patch. "There was a fella there. He must have been about our age. He was ripped shoulder to waist with shrapnel. I held his hand for the last 60 seconds of his life. He only said one word: 'Mother'. I didn't see her, but she was there. No doubt about it. He passed from this life into the next, and it felt as if I was in God's presence. I've never got over it. You never forget it. Never."

I don't know if I'll be able to watch this movie, despite my firm conviction that it's vital for people to become educated about thereality of these heartbreaking subjects. I have some family history in WWI, from the other side. I was always stunned by the stories of how soldiers would fight on opposing sides for muddy, cold weeks and months, and then stop to play volleyball with each other at Christmastime.

I need to see this.

Sounds like a good movie, I agree. Have you read Jaqueline Winspear's mysteries? Her website tells the story of how her grandfather fought in the war.
I still owe you two memes, I hope to get to them this weekend. :)

I shall have to watch out for this film.

I was touched that you quoted Harry Patch. He is, I think, the last surviving British veteran from WW1. His face is on the cover of a book on the shelf just a few feet from my desk, so as I type these words to you I can see him

M. - the 'other side' phenomenon is addressed in the film, since two main characters are of German heritage.

J.K. - I went to see this with my cousin Julianne MacLean and her husband, and she was literally on the edge of her seat at one point. Great romantic storyline.

Dorothy, Ann and Nicholas - I'm not sure how easy it will be to see this one. It's a Canadian film, so it gets buried beneath Hollywood releases like 'Beverly Hills Chihuahua'. But it's worth the effort!

I would like to see this movie, too. Sounds far more interesting than Beverly Hills Chihuahua! :)

I'll have to put that on my list to 'to be seen' movies. Thanks for the heads up, Julia. That's an important part of our history.