Performed here by the Louis Prima Orchestra and danced by the Floogees, a Dutch Lindy Hop group. This is my favorite wartime music, no comparison. When I was 18, I performed in The Royal Nova Scotia International Tattoo as a civilian dancer, and one of the two pieces we danced was a 40's medley which started with Sing, Sing, Sing. Unfortunately I broke a bone in my foot before the show, so I had to drop out of the 40's piece, which had a lot of hopping moves. I did manage the Rockettes piece, though, which was mostly kick-stepping.

This has got to be the most ferocious swing dance sequence you'll ever see. Performed by Whitey's Lindy Hoppers in a sequence from the film Hellzapoppin, a group of domestic employees puts on an impromptu jam session and explodes into dance backstage. To me, this scene foreshadows the coming breakout of African Americans from their pre-war social roles. Once again, their wartime travels to Europe exposed African American culture to a worldwide audience.

They made him blow a bugle for his Uncle Sam
It really brought him down, because he couldn't jam
The Captain seemed to understand
Because the next day the Cap' went out and drafted a band
And now the company jumps when he plays reveille
He's the boogie-woogie bugle boy of Company B

This tune appeared on the album For Our Armed Forces Overseas, one of a series of recordings by V-Disc, a wartime collaboration between the US government and private record labels. Meant to 'motivate soldiers and improve morale,'(Wikipedia) Strip Polka was on the 1942 Hit Parade for the Andrews Sisters. 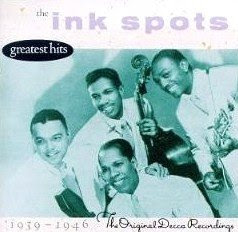 Performed by The Ink Spots

The Ink Spots were a highly influential quartet whose rich vocal style led to the doo-wop groups of the 1950's. Their song currently appears on the trailer for Fallout 3, an action role-playing game just released Tuesday.

Believe me!
I don't want to set the world on fire
I just want to start
A flame in your heart

Performed by the Glenn Miller Orchestra, the clip is from the 1954 film The Glenn Miller Story starring James Stewart in the title role. Moonlight Serenade typified the Miller Sound, which features a clarinet lead for the saxophone section. 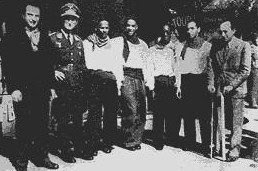 Performed by Django Reinhardt's Quintette du Hot Club de France, featuring violinist Stéphane Grappelli. Reinhardt was a Belgian gypsy who became one of Europe's first important jazz musicians. He survived the war even though gypsies were among the targets of the Nazi's ethnic cleansing. "He was especially fortunate because the Nazi regime did not allow jazz to be performed and recorded. He apparently enjoyed the protection of the Luftwaffe officer Dietrich Schulz-Köhn, nicknamed 'Doktor Jazz', who deeply admired his music." (Wikipedia)

The photo above was taken by Doktor Jazz and shows Django Reinhardt standing in front of La Cigale in Paris with a Nazi officer, four African-American musicians and a Jew. So much for Nazi ideology. Swing, baby, swing!

Performed by Bing Crosby, a towering presence in music, film and television. By the war years, he was a top star in radio and film, with 18 films released between 1939 - 1945, including Road to Morocco, Holiday Inn and Going My Way. 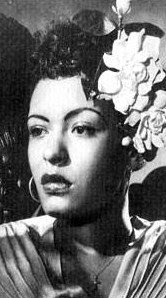 Holiday was a big band vocalist during the war years, fronting for Artie Shaw among others. This made Billie Holiday the first black woman to work with a major white orchestra.

The clip features scenes from The Notebook.

I'll be seeing you
In all the old familiar places
That this heart of mine embraces
All day through.

I'll be seeing you
In every lovely summer's day;
In every thing that's light and gay.
I'll always think of you that way.

I'll find you
In the morning sun
And when the night is new.
I'll be looking at the moon,
But I'll be seeing you.

10 - You'll Never Know, written by Harry Warren and Mack Gordon, with lyrics based on a poem by war-bride Dorothy Fern Norris, 1943

Performed by Michael Buble, a modern-day crooner originally from British Columbia, on the west coast of Canada.

Performed by Harry Connick, Jr., another modern-day big band leader from New Orleans, Louisiana. The clip is from the 1989 film When Harry Met Sally, a film about opposite-sex friends who discover they actually love each other, which I went to see about a month before my 2-year friendship with Brad turned into love. Ask me if I found it excruciating to sit through...especially the awkward New Year's Eve kiss that's in the clip!

Night and day, you are the one
Only you beneath the moon or under the sun
Whether near to me, or far
It's no matter darling where you are
I think of you
Day and night

Night and day, why is it so?
That this longing for you follows wherever I go
In the roaring traffic's boom
In the silence of my lonely room
I think of you
Day and night

Performed by Vera Lynn, an English singer known as The Forces' Sweetheart. Singing for several dance bands, including Bert Ambrose and his Orchestra, Vera Lynn's radio series Sincerely Yours sent a taste of home to British forces overseas.

Possibly the most well-known and touching of any song from the war years, this song bravely states that the singer and listener will meet again - hopefully in this life, but most definitely in the next.

I hope you enjoyed this look back at the songs and music of World War II. Join me next week for another special Thursday Thirteen in time for Remembrance Day.

Posted by Julia Phillips Smith at 10:10 AM

Last week I took a look at 13 Songs and Music From the First World War Era.

Moonlight Serenade is my all time favorite. My father always said this song reminded him of WWII the most. I can see why.

I loved the Queenie one. Never had seen that one before.

I ♥ Bing Crosby. What a crooner. I also ♥ Frank Sinatra too.

I couldn't get the Billie Holiday video to play, but that's another winner.

What a precious and troubled time, but this music was a wonderful part of it all.

This was even better than last week Julia.

Sandee - I had technical difficulties with the Billie Holiday song, but I've got version number two up now.

The Queenie song is hilarious!

Great list Julia. On Rememberance Day I plan to share a bit of my favorite book about WWI, Rilla of Ingelside by L.M. Montgomery ... that's if my pregnancy hormones don't cause me to blubber even more than I do.

I enjoyed the trip back in time. The songs from this era are so poignant.

I remember Billy Holliday, the Andrews Sisters, Bing Crosby, Glen Miller and Cole Porter, but some of the other artists are new to me. Thanks for sharing.

That’s an excellent collection, with many contrasts!

Django Reinhardt used to tell Stephane Grappelli that there was only one star at the Hot Club of France, though I’m not sure that the great jazz violinist quite agreed. I am a great fan of the QHCF and have dozens of their recordings on CD and some on original 78.

I didn’t know that Sing Sing Sing was written by Louis Prima! I’m quite surprised really. If you can, have a listen to Benny Goodman’s seven-minute recording of it, which was part of his memorable concert at the Carnegie Hall in, I think, 1940. You can hear how the audience gets right into it.

V-Discs were an excellent idea and a great morale booster for American servicemen overseas. The performers charged no fee and the records were given away free, with the condition that they should never be sold for money. Some hope! Rare examples change hands for huge sums among vintage record collectors these days.

Cole Porter once asked Frank Sinatra “Why do you sing my lyrics as though you wish they had been written by someone else?” but in the clip you give us the young (and so skinny!) Sinatra performs faithfully to the spirit of Porter’s music and sophisticated lyrics.

What a wonderful TT! Thank you!

Nicholas - I've got a Benny Goodman version of 'Sing, Sing, Sing' that I definitely love. When I was looking for dance footage to this piece, I had to go with this clip. I've gotten quite into Prima's version now.

That's funny about Cole Porter's reaction to Sinatra's interpretation. Meanwhile, Sinatra's phrasing was one of his greatest talents. He turns the song into conversation - amazing. And the way he pulls back on the line 'in the silence of my lonely room' - *shiver*

Oh, these are great! I was only familiar with 5 of them, and I loved listening to the ones that were new-to-me.

Frankie!! Used to have so many pics of him on my walls as a teenager. Still love him. And that first clip is cool!

What a fabulous list. I know quite a few of those songs. My grandmother who passed away four years ago would have loved to listen to these. She lived to be 100 years old, and she lived through WWI, the Great Depression, then WWII -- then so much that followed, Korea, Vietnam, first human on the moon, all the way up to our satellite and cell phone era. In many ways, she was ahead of her time, but in spirit, she was always a woman of the generation that produced these songs, what many people call the Greatest Generation.

Hi Julia. I'm delighted to tell you that the random integer generator picked you as a winner in my giveaway, and since you were the first to express a preference for A Special Collection in Praise of Mothers that's the one that will soon be on it's way over to Halifax!

Congratulations, I know you'll enjoy it. Drop me an e-mail with your mailing address and I'll get it right out to you.

Robin - Squee!! Thanks so much!

I grew up listening to my Dad singing those songs - thanks for the memory (wasn't that a song too?).

The musicians with Django and "Doktor Jazz" on the photo are not African-Americans, but French Caribbean musicians of the Hot Club de France who have recorded with Django – among which Robert Mavounzy and Claude Martial, who are easily recognizable from the photo on this page. I think Al Lirvat is there too.
More info about their music can be found on those liner notes for the "Antilles Jazz" /"Swing Caraïbe" CD (scroll down for the English version of text).