A to Z Blog Challenge - Z 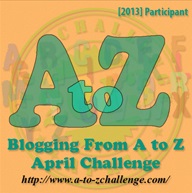 *tooting little horn*  Welcome to Day 26 of the A to Z Blog Challenge. My third completed challenge--thanks to everyone who dropped by. Today:


In the sequel to my dark fantasy novel, BOUND BY DRAGONSFYRE, releasing later this summer, the sect of monks who stamped out the use of magick are the zealots to whom I refer.

In the world of Dragonsfyre, called the Eighth Dominion, dragons plague the people in bursts of destructive sightings, rather like the tornadoes of this world. Generations back, a sect of monks linked the dragon sightings to the use of magick, and since that time magick has been outlawed in the Eighth Dominion. Of course, the monks then replaced the seers as imperial consultants.

To wrap up this year's A to Z Blog Challenge, here is a sneak peek at Book 2 in my Dragonsfyre series:


Dragon signs were everywhere.
Xaviero kept this to himself as he scanned the sky for confirmation that the inevitable drew nearer. No one must even suspect that he could foretell the future.
Instead, he sat in the cadet’s hall staring down at his plate of food, listening past the low hum of the other boys’ conversations.
Seers were blessed by the gods, it was said. Yet the monks who served these gods rejected visions as proof of magick.
Best to sit here ignoring the ominous sound of many little animals rushing away at once. It would take only a few moments more, and surely the cadets on watch would see the movement along the ground.
His pulse raced, though he sat as still as he could, his fork poised above the chunks of meat in thin gravy. How oblivious they were, the other boys and the older officers both. Eat quickly, he wanted to urge them.
Taking his own advice, he grabbed one last mouthful as the hall darkened, frantic flapping overhead announcing birds in mixed flocks in the air above their academy.
Conversation ceased. Heads turned.
A sharp bugle call warned of danger.
Cadets and officers called orders as boys ran according to drill and shutters slammed. Xaviero blocked all of it out as he bolted for the middle of the yard, free to turn his head to the sky as the chaos provided cover at last.
There it was, a large black form far off in the late afternoon sky, sunlight glinting off scales as the dragon approached with impossible speed. Xaviero’s thrill at finally seeing a dragon with his own eyes splintered into cold fear.
The wings flapped once, twice, then held straight as it glided in eerie silence directly towards the academy. Xaviero made out spiky horns along its head and spine, its mouth opening to reveal teeth as big as swords.
The dragon’s cry rent the air as Xaviero was lifted bodily, carried at a run by one of the commanding officers towards the barracks. Taking the few steps in one leap, the officer dove with Xaviero through the door, landing hard on the wooden slats just as the heat of the dragon’s fire burst in yellow and orange plumes to blot out the sky.
A hot blast of wind slammed the door shut as the searing flames poured over and around the stone barracks. Xaviero and the officer hid their faces from the heat, but when they could no longer hold their breath, they lifted their heads to find smoke filling the barracks. The officer pulled Xaviero to his feet, already turning to head for the door.
That’s when Xaviero was struck with a vision.
The grip of the officer’s hand upon him as he made to leave was all it took. In that split second Xaviero knew he must not let the officer open that door.
Dragging back upon the man’s arm with all his weight, Xaviero cried, “No, Sir! No!”
The officer stopped and looked down at Xaviero, eyes filled with disbelief that fear had got the best of a top cadet. “We’re getting out of here,” he said in a voice that brooked no argument.
Again, he made for the door. Yet Xaviero knew without a shred of doubt that it would be the last thing the officer would ever do.
Grabbing the man’s arm and pulling so hard the fabric ripped, Xaviero said, “Sir!” with the authority of a commander. “You’ll be burnt up!”
Stopping in his tracks, the officer turned to gaze at Xaviero with a hint of dread in his face. He stopped pulling against Xaviero and listened. The crackling sound of flames could now be heard just outside the door.
With the heavy energy of the dragon’s flight still swirling in the air, the officer seemed to shake off the notion that Xaviero had divined the future in time to save his life. If that were the case, it would mean that a boy in their academy was an adept at magicke.
It was easier just to leave the barracks by climbing through the window on the other side of the common room, easier never to mention an incident forbidden by imperial decree to his superiors once the reports were finally given.
At least, Xaviero was never called to headquarters to explain himself, though the officer in question gave him wide berth from that day forth.

Posted by Julia Phillips Smith at 7:07 AM

Please let me be the first to congratulate you on completing the challenge! I followed you all month and was always pleased (even if I didn't always post).

Fitting post for Z-Day.
Congratulations on finishing the A-Z!

congrats on finishing the A-Z! what a strong finish. :)
Nutschell
www.thewritingnut.com

Xaviero- I love that name! Are you pronouncing it like "Zay-vee-air-oh," or "zay-vee-er-oh," or more like the Xman Professor "Ex-aye-vee-er-oh"? I love it no matter how it is said, I'm just curious. I love encountering new names!