All About Me Me Me

Robin from Around The Island asked me these questions for the All About Me Me Me she opened up to all takers. If you'd like to do this one, let me know in comments and I'll send you four questions of your own.

Robin - When you were a young child what did you want to be when you grew up? How close/far from that are you today?

Julia - Miss Frou Frou asked me a similar question in her interview a while back. In that one I mentioned my passion for storytelling, which included my very elaborate role-playing social games (like "let's play 'Little House on the Prairie" or "let's play 'Star Trek"), my Barbies story arcs and my dolls. But when I take another look at my doll play, I was a very serious caregiver. I had five dolls which I referred to as my kids, and they all had to be tucked into bed each night, not slung into a toy box. The horror. I often took my favorite doll, a Raggedy Ann, around town with me. If it was cold, she always wore her little striped cape which my mom made. My dolls always had their own little Christmas tree which I cut down out of the woods near my school. I'd buy little foil-wrapped European chocolates for their stockings (which I would eat, but 'in character'.) Here's a picture of them all snug in their Christmas Eve bed one year. 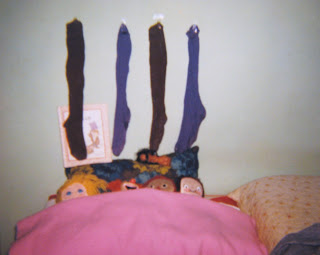 The blonde Mrs. Beasley doll was my sister's, but the Bozo, Raggedy Ann and Campbell soup kid were mine. I can't remember if my sister's had a name other than Mrs.Beasley. But my 'kids' were called Jim, Candy and Arnold.


I am a natural care giver. I worked often as a babysitter even as a young girl, took my early childhood education and worked in day care. I also worked as a nanny for two families. I had every intention of being a mother extraordinaire. Yet I've had multiple miscarriages in 15 years of marriage, and at 43 my chances are growing slimmer for that role. However, I've just spent the past 8 years helping my mom care for my grandmother, who just passed away this Dec. 1st. I can't help myself. I love to love.


Robin - If you suddenly discovered a lamp with an actual genie in it, what would your three wishes be and why? 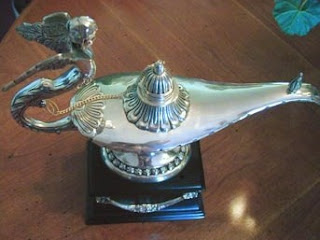 Julia - Wow. That's an incredibly hard question. Or is it? From a complete blank, my thoughts charged in one direction. I would wish for no more migraines. Phew - I feel better just dreaming of that. Then I would ask for my husband's bipolar disorder to stabilize itself. Ah...this is really dreamy, Robin! For my last wish, I would wish the genie's freedom back to him. Then I would thank him from the bottom of my heart for granting that which he was compelled to do. And then give him a huge hug - if he stayed around long enough.

Robin - What is the furthest from home you've ever been?

Julia - I haven't travelled too far, really. I mainly go back and forth between Halifax and Toronto. From my east coast starting point, I think the farthest I've been is actually my birthplace.

I came into the world in Fort Hood, Texas, where my dad served in the US Army. At the time he was living in Michigan as a registered alien, never giving up his Canadian citizenship. Though he did eventually become a dual citizen. I lived in the Lone Star state for 3 whole months before my dad's discharge from the army. Then off I went north to Michigan. I've been a northerner ever since.


Robin - What is your favorite comfort food? Do you have a recipe to share?

Julia - Rice is nice...very nice. It's my favorite food, by far. I can't tell you the level of serenity that comes over me when I eat rice. I like it in any form except as pudding. I need my rice to be savory, not sweet. My absolute favorite way to eat rice is the way my grandmother makes it - my other grandmother, my dad's mom. We call it Phillips rice, even though she got the recipe from an old Armenian lady with whom they were friends in Michigan. My mom HAD to learn how to make it when she became a Phillips, and I HAD to learn to make it when I moved away to Toronto. We have it every Christmas Day. It's joined in my mind with intense feelings of well-being, magical wonder and family love.

This is for a crowd, remember!

Bring broth to a boil. As you hear broth getting ready to boil, melt butter in the larger pot you're going to use for the rice. Saute the uncooked rice briefly just as the broth reaches the boiling point. Pour broth into the bigger pot over the rice. Add ketchup (we just give a couple good shakes of the bottle - no measuring), salt and pepper, stir and then put the lid on. Cook for 20 minutes or until you can't hear anymore bubbling in the pot.
Note: I've cooked Phillips rice in my rice cooker, just placing all ingredients in at the same time and pressing the 'cook' button. It comes out perfectly that way, too. 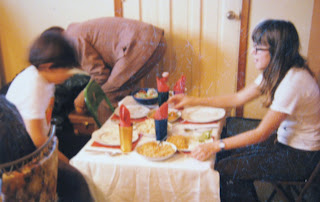 Here's a picture of me at an earlier Christmas with my plate half-covered in rice. You've got to have your priorities. I'm at the kid table across from my cousin. He's now 6' 2". I think I stayed the same height.

Love the 3 wishes - shows your character :D
And hey - I HAD A MRS BEASLEY!! That brought back a memory I didn't even know I had!!

Julia you're such an interesting person, and I love the 3 wishes too!!

What great answers! I wish your two wishes for you too! :D

And I love that last picture!

I love that picture of your dolls! And talk about elaborate preparations for their Christmas. Wow. I'm not that organized now! :-)

I used to play Bionic Woman and Wonder Wonder when I was little. And The Price is Right. And of course, as the oldest, I always got to be Bob Barker.

Oops. I meant Wonder Woman. That was one of my favourite shows. LOL I actually bought the doll a couple of years ago, just to have it. My kids thought that was a riot.

Julia, I loved the post and learning about you. I laughed when I read about you eating the chocolates while in character :-)

Thank you, Akelamalu! From the very bottom of my heart, truly.

Mrs. Beasley! There's a memory. I didn't have my own doll, but my cousin did - she had all the latest, greatest toys. Grrr.

Love your wishes - your caregiver side even comes out in your wish for the genie!

Julia, I marvel that all the challenges in your life have only made you a more peaceful and loving person. Even if that genie doesn't show up, I hope your two wishes come true.

Thank you, everyone, for your wishes for my wishes!

I love the way you took care of your dolls like that. My Barbies were always having adventures too.

I'm sorry for your miscarriages, I can't imagine how hard that must be. If that dream can't come true I hope that at least some day your other two wishes will.

Mrs. Beazley was my favorite doll! My sister got a hold of her when she was three and ripped her arm off. There was nearly bloodshed in the Boyce household that day...