I was tagged for this meme back on September 18th by Amy but saved it for now.

What is your favorite Christmas gift? 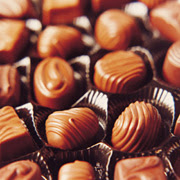 Some people may consider chocolate an unoriginal gift, but it's NEVER the wrong idea for chocolate aficionados. Of which I am one.


What is your best memory of Christmas? 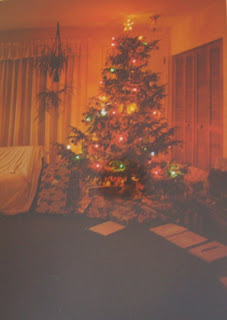 I'm such a Christmas freak that this is an impossible question. But I'll pick one special memory that stands out for my mom and me.

This is the very tree my mom, my sister and myself bought and put up while my dad was away on a business trip in the late 70's. We were very excited about it because it would be a big surprise for him when he flew back to Halifax, probably from the Caribbean where he was selling Dacor scuba diving equipment to retailers. It must have been the weekend or at least a Friday night, because we stayed up late once the decorating got under way. After the tree was in the stand and the lights on, before the fun part of the decorating started, we all felt really hungry. So my mom whipped up a nighttime 'breakfast' of fried eggs and toast, which we devoured with the same glee that suffused the entire evening. What was so special about that night was the sensation of going out on a limb, doing things by ourselves that Dad usually looked after and turning everything on its ear.

My mom and I often refer back to that night. 'Remember when we ate the fried eggs, that time?' we'll say, smiling with twinkly eyes.

Depending upon where you live, do you have a hot or cold Christmas?

Well, I live on the east coast of Canada, and Christmases usually feel like this: 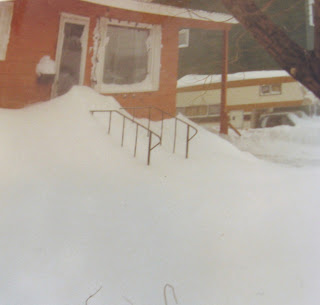 This is my childhood home - one corner of it, anyway. It's the one I often dream of, even though I've lived in eight subsequent homes since then. The home where we had the late-night fried-egg Christmas tree decorating extravaganza.

Would you prefer to try the opposite weather at least just once? 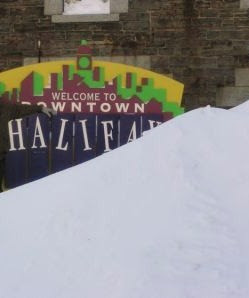 I've never really been inclined to try hot weather at holiday time. I'm extremely attached to everything connected to a white Christmas. The few times we've had mild weather and had rain or at least no snow, I felt rather disappointed. If life were to put me in that position somehow, I'd take advantage of that and really experience it as the wonder it would be for me. But I'd never purposely seek it out.

What do you prefer in a tree? Fake or real? 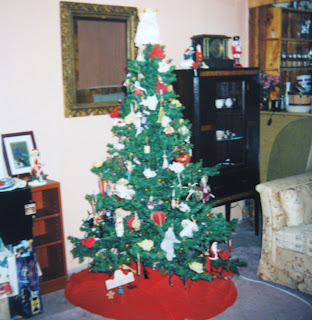 When I was young, I was a complete real-tree snob. The idea of a fake tree absolutely horrified me. But then my allergies to trees kicked in. So it was fake trees or nothing, and I'm too much of a Christmas freak for that. Now I've grown to appreciate that the metal branches can be tugged this way and that to perfectly accommodate any ornament.

This is my tree, from three years ago.


What is your favorite carol?

I think if I really had to choose one, it would be have to be The Holly and The Ivy.

What is your favorite Christmas dinner?

Christmas Eve dinner over at my aunt's house may actually be my favorite of the two dinners. We dress up, there's the excitement of it finally being Christmas Eve, and then there's the lobster newburg over rice, served with salad. It's so delicious, so rich, so special. 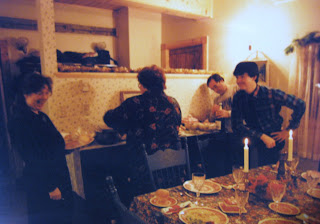 This picture was taken during my first Christmas Eve home from Toronto in 1986, my first home-for-the-holidays experience. I'd missed everyone so much and had fantasized about exactly that moment, when I'd be walking towards the dinner table to eat Auntie's lobster newburg at long, long last. L to R: me, my mom, Uncle Charlie and my cousin Charlie. 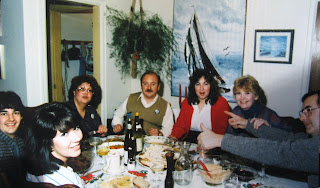 This is Christmas Day around 1984 or so. Gathering around a turkey dinner, with rice, mashed potatoes and vegetables is definitely another version of heaven. Christmas Day is the more relaxed of the two dinners. Usually we wear new Christmas clothes but it's more informal than Christmas Eve. L to R: my cousins Charlie and Julianne, Mom, Dad, myself, Aunt Noel and Uncle Charlie.

Do you wear a Santa hat at Christmas? 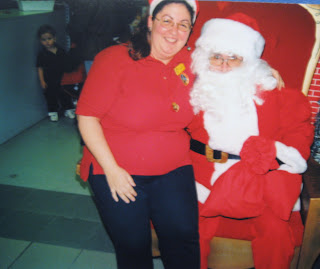 I have at work, many times! This is me when I worked at A Buck or Two in Yarmouth, Nova Scotia eight years ago. The Santa was married to the store manager, and in a small-world thing, he turned out to be a cousin of mine. His grandmother and my grandmother were sisters!


Have you ever seen Santa delivering gifts? 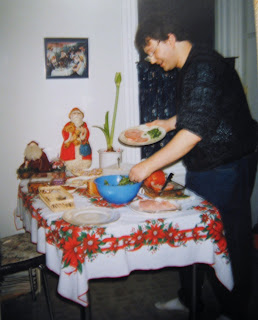 Almost. When my sister lived with my husband and me in Toronto, we'd had a Christmas Eve celebration at our apartment, inviting the family for whom I'd been a nanny over for dinner. This is my husband Brad digging into the spread. Once everyone had headed home, my sister went upstairs to bed, and my husband chilled in the living room (me - I was doing last-minute secret Santa stuff for stockings, of course.) In a little while, Michelle knocked on my door (me, hiding everything frantically.)

"Jule, can you come up for a second?" she asked, her voice sounding a little shakey. I followed, and when we got there she said she didn't know if she was feeling alright because she was POSITIVE she'd heard Santa outside. We looked out the gabled window and sure enough - Santa was in fact walking down the sidewalk in the falling snow with a gold toy sack over his back. We both felt exactly the same electric thrill through our bodies. We looked at each other, knowing it had to be one of the neighbors. But for that moment we felt like we'd finally seen him.

I hope every one of you gets to experience that feeling once in your lives.

I won't tag anyone, since it's so close to The Big Day, but anyone who wants to play can consider themselves tagged. Ho! Ho! Ho! Merry Christmas!

We had to switch to fake trees when my mom's allergies got to be too bad. Now that we have one, I can't imagine going back to a real tree. Though that said, some of my favourite Christmas memories are around when we would go out and pick our tree as a family when I was a kid.

How fun and I learned so much about you. Have a great day. :)

That was great ... I think I was tagged for a meme just recently and forgot to do it. WHOOPS. Spent my free time writing that poem. ;)

Christmas memories are the best.

Great Christmas memories Julia -- thanks for sharing them.

I must admit, my eyes lit up when I read the part about Dacor and scuba. My whole kit was Dacor when I lived and scuba'd in Bermuda.
Ah -- someday, again, I hope.

This was a great meme Julia, I loved walking through your memories. Thanks for sharing!

What cool answers to this meme. It drew me right in. Lobster newburg, hmmm"! It makes me want to start that tradition too!

I like your Christmas memories, Julia. They sound great!