Review for Firebird by Mercedes Lackey 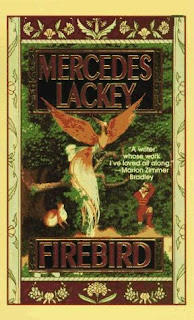 This is my second review for Kailana's Four-Legged Friends Reading Challenge.

I just finished Mercedes Lackey's Firebird, which I absolutely adored. She's a fantasy author I've often heard about but hadn't yet had the pleasure of discovering. Now I'm a big fan.

Kailana's challenge required books that featured animals as main characters, so I'd asked my husband to scour our immense hoard of books for a few that fit her criteria. My first book was The Golden Compass by Philip Pullman - you can read that review here.

Firebird features many animals whose language is understood by Ilya, the main character, once he sees the fabled Firebird in his father's cherry orchard. I knew I'd love this book when I turned the first pages to the dedication and found this:

"To Natalia Makarova
Always, for me, the Firebird"

In fact, I have to admit I suddenly got a bit teary as I realized I'd picked up a book written by a kindred spirit.

For those who don't recognize the name, Natalia Makarova is a former Russian prima ballerina whom I had the privilege of seeing in performance when I first moved to Toronto in the late 80's and she guest starred with The National Ballet of Canada in Onegin. Here is a photo of Ms. Makarova taken by Dina Makarova (no relation.) And here's a clip of her when she danced in a 1981 performance of Swan Lake with The Royal Ballet in England. 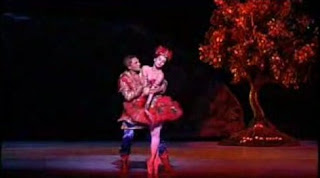 Here is another dancer, Diana Vishneva, Principal Dancer of the Kirov Ballet, dancing the role of the Firebird. She also dances with the American Ballet Theatre.

Getting back to the book review - I was immediately predisposed to like it because of her dedication, and to my delight Ms. Lackey delivered. The story follows young Ilya Ivanovitch, one of a number of strapping sons of a medieval Russian boyar or nobleman. Living by the divide-and-conquer creed, his father Ivan pits his sons against one another rather than foster any family togetherness. Ilya wishes it were not so, but he is forced to live his days looking over his shoulder, constantly on guard against his brothers. They recognize that Ilya is the most clever of Ivan's heirs, and several times they gang up on him, leaving him to nurse his wounds in the company of several servants.

When a mysterious thief steals Ivan's prized cherries from his orchard, Ilya will not stop until he discovers who has outfoxed his wiley old father. Even as his brothers fail to stop the thief night after night, Ilya watches as the Firebird arrives in the orchard, singing her irresistable lullaby.

From that point on, Ilya discovers he can understand and converse with the household dogs, horses and anything else he meets with feathers or fur. I really enjoyed Ms. Lackey's characterizations of the different animals. She has a wonderful sense of what would take up the thoughts of four-legged characters.

Ilya then embarks on a journey which takes him far from his miserable homelife and into a more sinister palace ruled by a Kastchei, an evil magician. There he vows to save Tatiana, the most beautiful of the maidens held captive in the palace within the maze. Ilya must use all of his wits, the help offered by his animal friends, and most of all the magical feather of the Firebird to save himself from becoming another living statue in the Kastchei's garden of warriors.

I really loved this book, especially how it still wasn't resolved at only two pages from the end. I could not predict what was going to happen, when all of a sudden the most amazing ending unfolded. I can only hope to end my own books like she did.

" 'I should have known you were too foolish to be true,' the Kastchei said, and the bored resignation in his voice did not hide the undertones of cold rage.

Ilya could not actually see the sorcerer; his wrists had been bound behind his back, and he had been forced into a kneeling position with his head down, staring at the inlaid floor of the Kastchei's throne room. Up above him on the dais, the Kastchei lounged, surrounded by the twelve maidens. That much Ilya had seen before the Kastchei's monsters threw him to the floor and one of them put his boot in the small of Ilya's back to keep him bent over.

'I should have guessed that it simply wasn't possible for anyone as monumentally stupid as you appeared, to be able to penetrate my maze, much less survive for an instant among my minions,' the Kastchei continued into the otherwise silent throne room. 'And now what am I going to do with you?'

Ilya did not reply; he merely licked blood off his split lip and remained silent. The less he said, the more he might learn - and at the moment, he would take anything that would give him a moment more of survival.

'Please.' Ilya recognized the voice of the Arab maid, soft and exotically accented. She sounded frantic, which was flattering, at least. 'For once, for the love of Allah, be merciful...'

Ilya wished he could see what was going on up on the dais, but he didn't dare raise his head. If he did, he'd be kissing the floor again. 'I do not care what Allah thinks of me, dear child,' the Kastchei replied, with a sardonic chuckle. 'And it would be far too risky to be merciful to this one. He's too clever. And, I suspect, too persistent. No matter what I did to him, short of death, he would find a way out of it.'

At this pronouncement, the other eleven joined the Arab maiden in pleading for his life, their voices mingling in a clamor of shrill intensity, Tatiana's voice ringing above the others. 'Has he not proved a worthier foe than all the rest?' she said in clear and ringing tones. 'Surely you cannot merely execute such a foe! Should he not be exalted above the others? Given a special place among your trophies?'

'Oh, a special fate, surely,' the Kastchei responded, his voice utterly cold and expressionless. 'One who had my own - fate - in his hands, oh, he surely deserves a special fate. And it is well for you, my beauties, that you could not be the source of his oh-so-accurate information.' By now that voice was so full of deadly promise that it sent ice down Ilya's spine. 'And I would like, very much, to know who told him what he knows. I intend to find it out before he dies.'

Silence fell again, and then he was gazing at a pair of shoes. Not boots before his eyes this time, but soft black slippers. The Kastchei grabbed him by the hair and wrenched his head up so that he was looking into the sorcerer's eyes.

The eyes of someone with no soul, he thought."

Wow, thanks for the intriguing book review! I enjoyed the excerpt, and the premise of the book has me captivated. I've never read any of Mercedes Lackey's work -- I think it's time to rectify that oversight!

And I simply can't resist a good story which features animals as main characters. :)

Now I am going to have to go dig through my Mercedes Lackey stash and see if I have this book!

Her Diana Tregarde series is one of my guilty pleasures.

I also like her book FAIRY GODMOTHER, or maybe it's just called GODMOTHER.

I like much of her work, but those are some of my favorites.

Sounds very interesting. Not really something I'd read, but well written.