I've got a busy weekend.

Tonight, after an extremely challenging week at work, I had a dress rehearsal for tomorrow's choir concert. It went the way dress rehearsals generally should go - not so super fabulous that we won't be paying close attention to all the spots that sounded shaky tonight. It's a strange-but-true thing - a really great dress rehearsal usually results in a flat performance.

Tomorrow morning I'll be hopping on the bus and heading for Spring Garden Road, to have an afternoon at the ballet courtesy of Empire Theatres and Opus Arte Ballet in HD.

I've had this picture as my screen saver at work all month, waiting until tomorrow:

It's the Kingdom of the Shades sequence from La Bayadere, where the entire corps shows us what its made of.

"The shades (usually thirty two of them) enter down a zigzag ramp coming down the back of the stage. They take two steps into an arabesque in plié, then two steps to pose in tendue derriere (the pose shown.) This short phrase of movement brings all of the shades on stage in single file. They zigzag down the ramp, then continue down the stage. The lead dancer has to repeat the phrase an incredible number of times, with the same leg every time." - Ballet Encyclopedia

"Like a patient drillmaster, original choreographer Marius Petipa opens the piece with a single, two-phrase theme in adagio tempo, repeated over and over until all the dancers have filed onto the stage. Petipa gives it a long time to creep under our skins. The choreography is considered to be the first expression of grand scale symphonism in dance. The subject of The Kingdom of the Shades is not really death, although everybody in this scene except the hero is dead. It's Elysian bliss, and its setting is eternity. The long slow repeated-arabesque sequence creates the impression of a grand crescendo that seems to annihilate all time." - Wikipedia 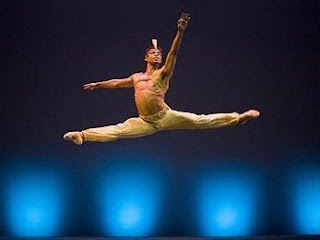 Ooo! I can't wait! Especially since Cuban wonder Carlos Acosta will be dancing, as well as Marianela Nuñez and Tamara Rojo. 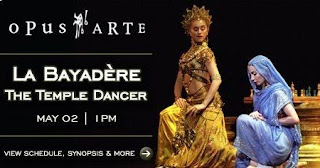 After the ballet, it's hurry-scurry home, get changed and drive my husband and me to my choir concert, where he'll watch from the audience. 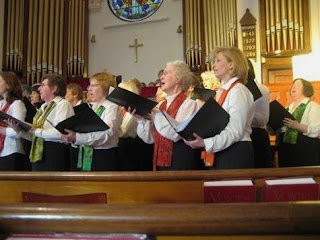 This was taken at the last concert in February, by my cousin's wife, Heather. Saturday's performance starts at 7:30 at Grace United Church, 70 King Street, Dartmouth, Nova Scotia.

And then Sunday I'll head out to have lunch with the writers, and afterwards I'll be giving the workshop at our monthly Romance Writers of Atlantic Canada meeting. It's called A Date With Creativity.

So what are you up to this weekend?

Akelamalu says Wow Julia, you have got a busy weekend ahead and an exciting one to boot!

Dorte H says Good luck to you with concert and everything - and remember to take care of yourself.

Hope you enjoy the Ballet too!

Wow Julia, you have got a busy weekend ahead and an exciting one to boot! Hope it all pans out and the ballet is as wonderful as you are expecting. Enjoy. :)

I am going to have a rather quiet weekend.

But good luck to you with concert and everything - and remember to take care of yourself.

For your performance, break a leg!

For your trip to the ballet, enjoy!

Nikki - my poor mom, who's also in the choir with me, couldn't sing with us and couldn't even come to listen to us sing. She's got a bad cough and would have ended up having to leave to cough outside. She's on the mend, but not soon enough for tonight. But my husband came to the concert, and he enjoyed it.

Akelamalu - I don't know how other people do this kind of thing all the time. Actually, if I stop and think about it - I used to be one of those people! But that was 20 years ago. My get up and go moves a lot slower these days.

And the ballet was a balm for my soul, as it always is.

Dorte - There you go again, tuning into me from all the way over there in Denmark. I've got a wicked migraine. Not easy to sing when your head has to vibrate, and the vibrations are killers. But we've got a cold front/low pressure system settling in. My pain levels were a good six hours ahead of the Weather Network mentioning it on air. I should start my own weather channel - the Julia's Head Weather Network.

Travis - the concert went really well. We have a new choir director this year, and he's really been working with us to improve the quality of our sound. We had a guest choir singing in the program, the Halifax Youth Honour Choir - and as we exited the stage after our first set, their choir director said, "Really wonderful." So that felt good!

The ballet was dreamy! Although my migraine really did intrude on my euphoria. HIGHLY annoying.

Wow! You ARE busy but how COOL!!!! Good luck with your concert and I hope the ballet is fabulous.

I love that you have something so very passionate to love - ballet! :) We are having a quiet weekend - I have to move my desk (again - 4th time in as many weeks) so drama insues.

Jennifer - I'm home from giving the writers' meeting talk - what relief!! It went okay, thank God. Unfortunately, the furnace guy is coming tomorrow, so we have to do a massive tidy-up. We have a basement apartment at my mom's house, so the furnace is right behind our living room. Why is our living room so messy...? Good question.

Claudia - The desk drama doesn't sound like too much fun. Hope it settles itself sooner than later. ...ah...the ballet...I'm not sure if anyone can be more passionate about anything on earth than a ballet freak's passion for dance.