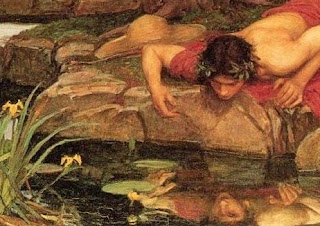 Welcome to my second installment of Identifying Life Patterns. I've long noticed that actors and actresses seem to be attracted to repeat certain types of roles in their careers. In my new blog feature, I'll be looking at different life issues found in the repetitive choices of actors and actresses.

What can we as audience members learn from this?

All of us can identify with certain life issues that seem to haunt us. For example, we may have been stuck with a teacher who never seemed to notice our accomplishments in favor of a star pupil. In our work life, we may find we work for a succession of managers who don't give us credit for our hard work. We may feel trapped by this frustrating cycle of not being acknowledged. We may have kids who take us for granted, a partner who forgets anniversaries. Are we invisible?

"As long as a person continues replaying the pains of yesterday, they keep designing experiences to repeat the pain. They will keep going back to situations that feed the pain.

The feelings you bring from past experiences create the understandings you have for today. Only when you find the positive lessons in the event, can you move beyond it." - Richard Flint, Breaking Free

The problem will not go away until we see it, recognize it and deal with it. And sometimes it's easier to recognize these painful life patterns when we watch a movie, read a book or hear a song on the radio.

Last week, I looked at a repeating pattern of grief I've noticed in Hugh Jackman's film roles. He's played the same scene over and over. No matter how big and strong a man his character is, he is unable to prevent the woman he loves from dying.

How could an audience member benefit from noticing this repetitive pattern in Hugh Jackman's films?

Well, sooner or later we will all come to that moment when we have to say goodbye to a loved one. Maybe we've already done so. Maybe repeatedly, like Jackman's characters. Perhaps we weren't ready at one time to hear the message these scenes give us.

But for some reason, we sit in a theatre watching one of these films and all of a sudden something clicks for us. We realize that death is a part of life, and no amount of running from it or bargaining with God against it will prevent it from happening.

For today's Identifying Life Patterns, I'm taking a look at a repetitive theme that runs through many of the TV series in which British actor Richard Armitage has appeared.

Here are stills from five of his TV series or mini-series. What is going on in these scenes? What is the dominant problem reoccurring again and again? And how would a person go about releasing this pattern once it was recognized?

Apprentice Writer says I'm not familiar with this actor but he certainly seems to inspire a lot of devotion among the bloggers I've visited!

Shelley Munro says I'm not sure, but I'd guess and say he's not a black and white character. He's always a half-step away from being a baddie, yet he struggles with this at times.

Sandy Carlson says I think that in life we run the risk of being typecast, as actors can be--we are comfortable in a particular role and we play it all the time.

I'm not familiar with this actor but he certainly seems to inspire a lot of devotion among the bloggers I've visited!

M - You'll have to watch a British mini-series called 'North and South'. Suddenly it will all make sense. It's about a northern English mill owner in the mid-1800's, and a southern English woman who comes to live in his northern town. Richard Armitage is shivery-good in it.

He also plays the troubled baddie in BBC's 'Robin Hood'. Legions of fans for that character. Including me.

And on 'MI-5' ('Spooks' in the UK) he plays a secret agent recently released from 8 years in a Russian prison. Love him in that, too!

Vicar of Dibley - the final series and show - is replaying here now. I'm looking forward to Spooks. The series with him in it isn't playing yet. I haven't seen North and South.

This is an interesting post, Julia, and I loved the Richard Flint quote. It resonated with me. Since I haven't seen all the shows, I'm not sure, but I'd guess and say he's not a black and white character. He's always a half-step away from being a baddie, yet he struggles with this at times.

Shelley - what a great reading of the still shots! I actually used Richard Armitage's character from Robin Hood - Sir Guy of Gisbourne - when I gave a workshop on The Gray Character at my writers' retreat last summer. He definitely specializes in those. He plays complex baddies whom we should not care about but always do.

Even his Vicar of Dibley character had that air about him. I loved those series-ending episodes with him!

Thanks for playing. And by the way - you should rent North and South, too. No woman should be denied the pleasure of that experience.

I think the lessons we don't learn present themselves again and again until we learn them. I know this from my own weird life. I also think that in life we run the risk of being typecast, as actors can be--we are comfortable in a particular role and we play it all the time.

Sandy - Great observation! Regular people being typecast is a perfect way of putting it. Thanks for throwing your hat into the ring.