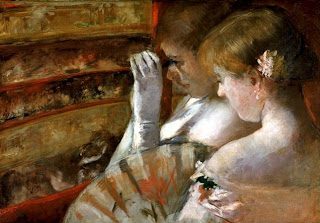 I've been waiting to see X-Men Origins: Wolverine since the first glimpse of this character in the first X-Men film. 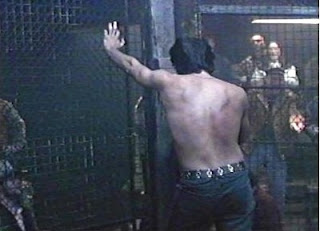 You know the scene. His back to us in the cage fight sequence. 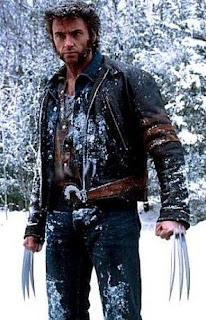 My husband Brad and I are big superhero fans, and on Saturday mornings in the 90's when I was getting ready to work the matinees at the performing arts theatre in Toronto, X-Men: The Animated Series was always on our TV. I just loved the opening credits music. We both loved waiting for Cyclops to yell, "Jean! No!" at some point during the episode. So I was already familiar with the character of Wolverine when we gratefully sat in our seats at the movie theatre in Yarmouth, Nova Scotia in 2000 for the first X-Men movie (we lived there for two years.)

Hugh Jackman hooked me with Wolverine the moment he turned in that cage with his raised eyebrow and his keep-away persona. Of course he was a badass. Of course he couldn't turn his back on runaway teenage Rogue. No! He's my perfect kind of male character. Because lurking there somewhere was the revelation that came in X-Men 2: X-Men United. Wolverine had endured a hideous physical transformation that gave him those claws. And he had the disturbed repressed memories to prove it.

When he stumbles upon the scene of the crime in X-Men 2, Wolverine flashes back to the top-secret military experiment that resulted in him.

These flash backs came to us as they came to him. Horrible scenes of agony, thrashing in a tank of liquid, breaking free of the perpetrators, trying to make sense of what had been done to him.

But they were only flashes, and Wolverine blocked them out as soon as he could.

Knowing an origins film was in the works simmered in the back of my mind for what has seemed like an endless torment. Not as tormented as Wolverine, mind you. But close.

Finally, finally X-Men Origins: Wolverine opened on May 1st. At last I could find out how he got in that tank, could brace myself to see the awful truth for myself.

Except that I couldn't. My personal hell of migraine plague was raging. This winter has been my worst on record, and by May 1st my endurance level was hitting critical failure. The Wolverine origins film was sure to be flashy and loud. No Wolverine for me.

I read reviews which said:

The movie is somewhat limited in its denouement in that as a prequel, Sabretooth and Stryker must live to play another day (in X-Men and X2) and Wolverine must remember to forget these events. Nonetheless, it’s engaging action, and a spur to watch X2 again on DVD. - David MacDonnell, Starlog

Which begs the question - why do I want to see an origin story so badly when I already know what happens to this character in the future?

This past Friday, all systems were go. My head was bugging me but not so badly that I couldn't grit my teeth and bare the flashy parts. And the explosion parts.

I met up with Brad and we greeted the long weekend finally sitting down in a theatre to see how Wolverine got to that opening cage fight scene back in X-Men.

For me, the irresistable call of the origin story is going through the transformation along with the character. Instead of having zero interest level because I already know what's going to happen to him in the future, for me this moment shown above is so much more gripping and heart-crushing because I know so much about Wolverine.

He readies himself for something we already know will be excruxiating in the extreme. It will change almost everything about him. The true transformation of one incarnation into another is my favorite type of story - a thread that runs through all of my own stories. 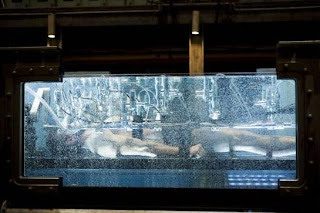 The echo of transformation resonates so strongly in us because so many of us experience its painful process.

We leave home, move to a strange city, experience hard times and must rely on ourselves to get through it. The new being that emerges has some battle scars, but stands straighter, taller.

A woman goes into labour and emerges as a new being - a mother. The transformation is painful. But the new persona created by that event provides the baby with its own personal superhero, someone who can push past the boundaries of the previous woman who existed before the birth transformation took place.

The chrysalis mythos is a basic element of the human condition. Without transformation, there is no growth. Without growth, there is no life.

When Wolverine endures the inevitable, I endure it with him - gladly. It reminds me that all the days that absolutely suck are not just meaningless torture. They are part of my chrysalis.

When Wolverine erupts out of the tank roaring with new life, a lean mean fighting machine, it reminds me of the way in which I meet my own personal pain, my own personal Black Moment. It's really my cue to show my true character. The transformation changes almost everything. The thing that remains is character.

The opening credits show this as Wolverine and his brother Sabretooth ennact their version of the Universal Soldier. A really nice sequence. Sabretooth's true nature is uncovered by each successive battle they're in.

And having Sabretooth portrayed by Liev Schreiber only adds to the joy for me. 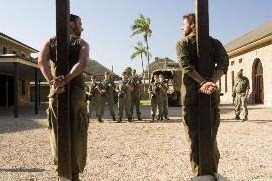 Because I write about vampires, this scene above where the two brothers, Sabretooth and Wolverine are about to be executed by firing squad - when they and the audience are aware that they have the ability to regenerate and will now have witnesses to their unexplained ability - sets up a delicious anticipation. 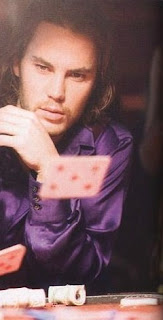 One of the complaints about the film is the inclusion of various Marvel Comics characters without giving fan-favorites enough screen time. Because the X-Men stories are really about a team of beings that work together, I don't see how you could tell an X-Men story without them.

My favorite of the new characters is Gambit, played by Taylor Kitsch. 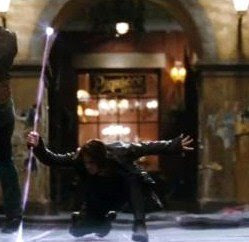 And Ryan Reynolds' Deadpool gets particular flack from fanboys and I assume fangirls because of mysterious retooling of the character's basic elements. His wisecracking personality, to be specific. Not being one of these, I enjoyed Reynolds performance and his swirling katana swords. You know I love me some swords.

Travis says It sounds great when you analyze it. But for me, I'd have to give the film a B-.

Ms Snarky Pants says I did always kind of have a crush on Gambit, though, so my expectations may just be a bit high. LOL Every other aspect of the film, however, I found absolutely delightful.

Bobbi says My youngest daughter is not a fan of X-Men, she went to see the movie just for the Hugh Jackman factor!!

It sounds great when you analyze it. But for me, the movie was kind of pointless.

I enjoyed the action, but here were all these really cool and intriguing characters with so little screen time and so little back story.

I'd have to give the film a B-. It stays in the 80% range for me because of the action and stunts.

Travis - my husband agrees with you.

I think perhaps we women might enjoy the film purely for the Hugh Jackman factor! It worked for me.

I have to say that while I thought the actor did a decent job with Gambit, I was a wee bit disappointed with him. I think mostly it was the accent. You occasionally hear a bit of an accent, but Gambit is supposed to be purrrrre smoooooth cajun sexiness, and I just didn't get it with this guy. He did do a darn good job with his fighting though.

I did always kind of have a crush on Gambit though so my expectations may just be a bit high. LOL

Every other aspect of the film, however, I found absolutely delightful.

Wasn't it just heartbreaking when he didn't remember his sweetie!? *sniffs*

Great review, Julia! Although my youngest daughter is not a fan of X-Men, she went to see the movie just for the Hugh Jackman factor!!

I loved it. We went to a matinée on opening night, and were surprised by how few others were in the audience. I, too had a headache. Forgot about it before the end of the movie.

Hi Julia - Great post! I don't know much about superheroes, but am finding myself gaining a slight interest. I have now more or less finished my thesis and am trying to get back into the blog-loop. It feels good to be back!!! Much reading around to get into, but that is the joy of it. I hope you are well :-)

It came down to either seeing this movie or Star Trek. Star Trek won, but I do want to see this at some point!

Ms Snarky Pants - Hugh Jackman seems to have a running theme of losing his beloveds in a lot of his films. But I love watching him freak out when it happens.

Bobbi - The Hugh Jackman factor is enough reason for anybody!

Louise - You must be exhausted. But in a good way.

Kailana - We saw Star Trek on opening day. Loved it.

didn't like the depiction of Emma Frost's diamond form either ..*nitpicking*