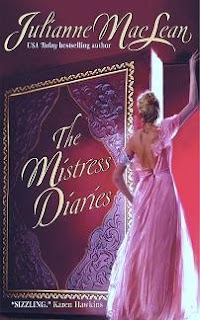 Darla tagged me with this meme which I did awhile back. This one is easy to do over and over because there's no such thing as too many books. At least there isn't in our apartment.

Here's how to play:

1. Pick up the nearest book.

5. Tag five people, and acknowledge who tagged you.

The nearest book is the one I'm currently reading. It's actually an Advance Reading Copy of my cousin's book, due to be released July 29th.

The Mistress Diaries is the second book in the Pembroke Palace series. Here we follow the story of darkly troubled Lord Vincent Sinclair. He was a very angry character in brother Devon's story, In My Wildest Fantasies. I couldn't wait to see how Julianne could redeem such a wounded man who lashed out with no holding back.

But Julianne is the Mistress of Redeemed Heroes. She gives us a character who's still very, very dark, even in his own book. But we see the world from his point of view and we feel for him - deeply. Especially since we see Vincent through the eyes of Cassandra Montrose, Lady Colchester, a woman who never falls for the charms of notorious rakes. Until she decides that she deserves one wild night of passion after an emotional shock that leaves her reeling.

Let's go to page 123 now. Vincent is in the drawing room with his fiancee, Lady Letitia.

'Apology accepted.' But then she let out a sharp little sigh of displeasure and began to deliver what sounded rather like a lecture."

I'm so looking forward to reading this. 28 days to go.

I had the wrong date, need to wait three more days from my 28 day countdown.

You have set me in motion. Have meme will travel.

Heather - just got your invite to Emily's Gallery and had a lovely meander this morning. Thanks!

Thanks for the tag! I'll do it this weekend for sure... also, check my reply to you on my blog. Im surprised you never saw the youtube!

You're right, there's no such thing as too many books! My bookshelves, groaning under so much weight, probably don't agree. ;-D

Hurray for a tag - you are a wonderful cousin to support her upcoming book! :)

Claudia - she is a wonderful sister/cousin whom I grew up with like a sibling. Last night she picked me up from work, we went out to dinner, she bought her dress for the Rita ceremony at RWA Nationals, and then we saw 'Wanted', as we both adore James McAvoy! I love my Cuz.

How did you like Wanted? I can't wait to see that one.

Wylie - the director for 'Wanted', Timur Bekmambetov, made those two Russian urban paranormal films I've raved about, 'Night Watch' and 'Day Watch'. I already knew how fabulous it would be - and it kicked some serious ass. And I LOVE James McAvoy - and the Russian actor I also love, Konstantin Khabensky, was pulled onto this Hollywood crossover film by Bekmambetov. So basically I was in heaven. And I adore superhero origin stories, and 'Wanted' is basically an origin story.

I've done my meme, Julia, but it won't appear until tomorrow. Have a fun weekend!

Julia, my niece is saying "Marraine, I saw her at halifax! It's true!"
I just told her that you live there!

Julia -- Hubby is away so I have to wait until next weekend to see it. :(
MacLeans magazine had some good things to say about it.