Poetry Train Monday - 53 - An Excerpt From My Gamekeeper Story 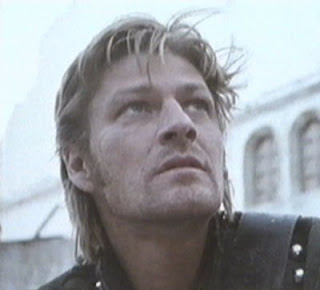 Here's another excerpt, this one from my Scottish gamekeeper story. This excerpt precedes the one I posted previously:

This story is set in Scotland in the early 1820's. Lady Jocelyne Moncrieffe hides from her dangerous nephew in the highlands. Guthrie Carmichael, her gamekeeper, takes her to stay with his family, only to discover his sister - who raised her brothers from the age of twelve - is gravely ill. I've modelled Jocelyne after Neve Campbell, while Guthrie is modelled after Sean Bean.


In this murky gloom, Jean’s pale wasting body sent his thoughts back to the cell on the far side of town, to that day twenty-seven years past, when he’d run from his father’s bony grasp.

Guthrie’s stomach lurched and his chest suddenly hollowed, filled by a sickening weight that pressed on him.

His father had asked for them, for his children, for he’d known he hadn’t much time left. And as it turned out, he’d lasted only another four days.

Jean had taken them to the prison, had carried three-year-old Guthrie past the gargoyle faces hovering over the entrance and had pulled him, unwilling, through the dark passages, following the warden with his great jangling keys that had opened their father’s cell door.

The other boys were quiet and compliant, somehow sensing the serious nature of this visit. They followed Jean to the prison without any trouble, had filed past the monstrous stone faces without a shiver or complaint. It was only Guthrie who’d pulled back on Jean’s hand, afraid to go in, afraid of the stone walls and the timbered doors four inches thick. It had been Jean’s father as well, hadn’t it, dying there, and perhaps she too had been afraid to go in. Had wished for a hand to hold that wasn’t Guthrie’s tiny resisting one. 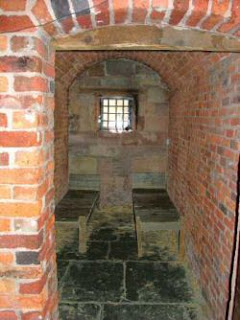 Jean tried to go to Father, struggling to rise on his filthy cot. But Guthrie clung to her, his arms and legs clamping around her body in a desperate grip. He wailed piteously, the pitch of it rising as she attempted to go near Father again.

Motioning Alastair to approach in her stead, Jean stood impatiently with the others, hiking Guthrie’s weight up when he began to sag down her undeveloped hips. And Guthrie, afraid of being set down, clamped on all the tighter, choking her neck in his desperation.

In the dim light through the rusted grating over the window, Guthrie saw Craig’s little face staring over at Father. Eyes round as boiled eggs and little fingers pulling absently at his lips.

Behind him, Guthrie heard low whispering as Alastair spoke with Father. Guthrie didn’t like Father's wheezy breath, the coughing. He didn't want to speak to this father. He wanted his old father, the laughing father. He longed to be scooped up and tossed into the air by strong hands, embraced by arms alive and filled with love. But all Guthrie felt in that dark cell was clutching, fearful desperation.

Father’s tone deepened, thickened. Not only babies cried, but men could, as well. Guthrie went very still from the shock of it, laying his cheek against Jean’s shoulder, relaxing his grip on her. She’d rocked him back and forth, turning to urge Lewis to go to Father next, and then Taggart.

Sniffles permeated the cell. Father spoke to each boy, his voice trembling. Craig grabbed onto Jean’s skirts, and Guthrie tensed once more as Jean reached down to take Craig by the shoulder, to nudge him gently forward. Guthrie whimpered as she took a step towards the cot.

Jean began to kneel, bringing Guthrie down to where Father could touch him. Guthrie didn’t remember much of what happened then.

Now in Jean’s room, he felt that same horror building in his chest, overflowing his gut. It never failed him with these memories. Perhaps his distress showed on his face, for wasn’t Lady Moncrieffe awake now, peering at him through the dark, her eyes glinting with concern?

Jerking her head to look at Jean, his mistress rose from her chair and attended to his sister. A few cursory checks and it was clear that Jean was sleeping undisturbed by any bad turn.

Rising, she asked, “Have you come to sit with her awhile?”

He couldn’t answer. Couldn’t speak. Only locked his gaze on hers.

For some reason he couldn’t understand, that question, her voice, the expression in her eyes - a furious yearning rolled like a wave through his body, and Guthrie blinked at the tears burning his eyes and choking his throat.

Footsteps crept into the room behind him and Lady Moncrieffe glanced over his shoulder.

“D’ye need some sleep, then, or is Guthrie taking the watch?” Craig asked softly.

“I believe he was intending to give me some rest, but he looks much more tired than I am,” Lady Moncrieffe spoke up.

“I’ll take the next watch with her,” Craig said, heading past the others for the chair.

Before he really knew how it happened, Guthrie stood outside the door of the worn-out house, Lady Moncrieffe closing it behind them. He stared at her, watching her pull one of Jean’s threadbare shawls tighter about her shoulders.

“You looked as though you could use some air,” she said. A slender but determined arm slipped through his. She led him forward, their path easy to find in the grey dawn.

Where was she taking them? he wondered. She didn’t know the area at all.

Not far, it seemed. She stopped at a shelf of black basalt rock creeping up beside the path. When he continued to stand, as if bewildered, she all but pushed him down so that he sat on the ledge.

Her giggling roused him from his stupor.

“Was I this lively when I was the sleepwalker?” she asked, smiling.

He smiled back, though his stomach churned like rapids foaming over rocks. He remembered another doorway, a grander door than his sister’s. A door much like the one that kept the Inverness prison locked tight against the daylight.

His lady had turned in that doorway. Had kissed him and said, “I’ll be waiting.”

“What is it, Mr. Carmichael?” she asked again, her voice tinged with longing.

He looked at her, his heart beating at the sight of her. The faint grey light cast a bluish tint to her skin.

“Ye really don’t recall it, then? What ye did when I found ye wandering around in the night?”

He watched her recoil, as if his very words were noxious.

“No.” Her eyelids fluttered and her lips pressed together, as if she feared words that had already been spoken and too late to change them.

“I ought to tell ye, then. Should have done, before...” But he lost his way, in her brown eyes so filled with dread.

Her fingers closed around his arm. “Don’t feel that...you...oh...” Her voice trailed off and she turned her head, staring at the rock ledge and waiting for the blow to land. Guthrie felt her nearness, as if those inches didn't separate them. And suddenly they didn’t.

He pressed her against his body, covering her lips with his mouth.

All the moments of his life led to this one. Guthrie's senses screamed back to life with the taste of her. Opening his eyes, he found Lady Moncrieffe returning his gaze with naked fear. He released her. 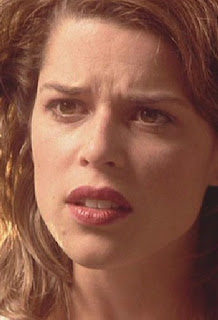 “That’s something ye wouldna remember.” His words tumbled into the morning only to hang there, idiotic and humiliating to them both. Guthrie sat, staring at his feet. Wishing he’d never got up from his bed, had not lit the candle, not entered Jean’s room to find Lady Moncrieffe watching over his sister.

But angels could be swift with righteous anger. This one swung her slender arm with all the force of her injured pride. Her hand struck his face with a loud crack. Guthrie’s cheek flared with pain.

“You forget yourself, sir!”

“What was the meaning of that? Tell me plainly!”

“Ye said ye didna remember what ye did or said when I found ye sleepwalking. So I just showed ye.”

His mistress trembled with outrage. Her cheeks flushed and her eyes darkened with anger.

“When I brought ye back to Kinnoull,” he went on, “the second time - ye never woke. And we walked back, the whole way. Ye spoke with me and I answered ye. Ye took me by the arm and walked with me, up to the castle door. As if we were sweet on each other. And then ye turned, and ye did to me what I just did to ye.”

His mistress looked at him in raw dismay. Guthrie dropped his gaze, unwilling to see her at such a loss.

“What more is there?” Her voice thickened with shame.

Without raising his head, he replied, “Ye said to me, ‘I’ll be waiting.’ And then ye went into the castle. And I stood there, wondering if ye meant fer me to follow.”

He peered at her, but she could not meet that look. She shut her eyes against the sight of him.

“And I wished that ye did mean fer me to follow," he said. "But I knew ye were dreaming. That ye thought I were someone else - yer husband, I figured. In yer dream, ye were trying to meet up with someone. That’s who I figured it were. Who else would ye be kissin’?”

Guthrie’s heart squeezed painfully. “I told ye - I knew ye didna mean me. But it didna stop me from standing there in an empty doorway, wondering what it would be like if ye had meant me.”

Posted by Julia Phillips Smith at 5:50 AM

Verra well done! I need to work on my fiction more; been focused on articles recently and my stories, while still attended to, aren't getting a great deal of attention.

I'm starting to think you are really enjoying writting this one.

Oh Julia -- I hate these excerpts because they just serve to TEASE!! I want to read the rest of your story.
Your voice is amazing -- the imagery fantastic (and the pic of Sean Bean wasn't a mistake, either *hee*)

Thanks, Wylie - your encouragement means a lot right now.

Awesome! and I agree with Wylie lol

Writing this bit by bit, you vet our appetite!

Nice! I like the slow pace - the way her hand moves back, the detail in each description. I can't do that - not at all. You so have this genre down. Have you talked to the e-book publishers?

Lovely excerpt, Julia. I agree with the others. Well, done!

Wonderful job Julia! I could hear their voices so clearly as I was reading. :)

wow julia you sure sweep me away!

where am i? oh sleepwalking again?

Yep, everyone's pretty much hit it on the head. This is fiction to linger over.

Ooh Scotland.. yummy men! Great stuff there! And I love the Bean, of course. And Neve, too! She's been to a few of my gigs, very nice girl. And she is stunningly beautiful in person, way better than she looks even in film.

I love this story Julia! I can't wait until you get published, so I can say "I knew her when". ;-)