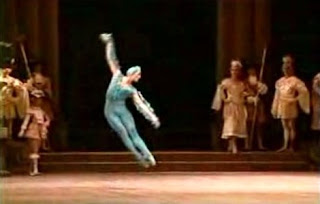 After receiving longed-for news that I am no longer Pinnochio, but a real live boy at my job, I went joyously to see the Royal Ballet's Sleeping Beauty, broadcast in HD from Covent Garden and shown at a cinema theatre in Halifax on Saturday. Not only is Sleeping Beauty one of my favorite ballet scores (the soul-touching Tchaikovsky), but it showcases one of my favorite pas de deux - the Bluebird pas de deux.

I love this piece of dance so much, I set out to make a short film focusing on the choreography's attempt to replicate flight. I was even shortlisted by the Canada Council for the project, but alas, did not get the grant. Someday. 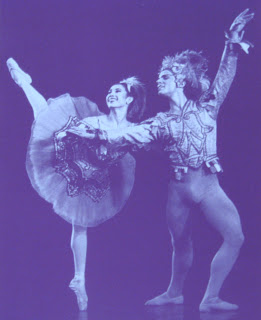 The dancer who agreed to be in the film if it got the green light was Johan Persson, at left. He danced for the National Ballet of Canada when I worked at the theatre as an usher. He was the best Bluebird I've ever seen. His powerful masculinity inhabited his performance like a shapeshifter. He was shivery-awesome to behold.

He's now retired from dance and is a photographer specializing in theatre photography, as well as portraits. He's definitely spoiled me as far as Bluebird performances go. The Bluebird pas de deux takes place near the end of the ballet, so part of me is waiting and waiting for it to start, even though I'm reveling in the rest of the ballet.

Imagine my dismay when the Bluebird started and the guy absolutely sucked. She was great - he sucked. I won't even tell you who it is. If I can't say anything nice, I won't say anything at all.

If you want to see what the Bluebird should look like, check out this wonderful performance I found on YouTube by Vitali Tsvetkov from the Mariinsky Ballet Theatre.

Don’t wish it all away, I always think.
The overture begins. The ballet starts.
Anticipation drags me to the brink -
The tale unfolds, each luscious scene departs.
And then the prince and princess are to wed.
I long to see one very special guest,
And when that music sweetly fills my head,
The pas de deux begins that I love best.
So masterfully he steps upon the stage,
No longer man, but fiercely vibrant beast.
More than any war with earth-bound waged,
These variations let us mortals feast
Upon the victory this dancer scores.
The man who dances Bluebird truly soars. 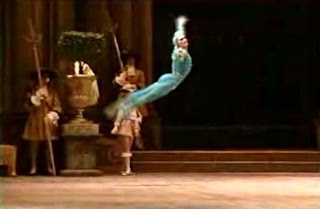 I'm still stuck at looking at his butt! Is it the footstep he does at 6:00?
And you have been waiting a long time for that part of the ballet!

Jill - one of the most glorious wonders of watching ballet is seeing all of those powerful male butts and thunder thighs. Yes, oh yes...

Your writing places me in an orchestra seat feeling the intensity of this interpretation. Thanks, Julia!

The last picture really captures the moment in the last line of you poem. I like.

I tried to picture you as Pinnochio with a long nose, but then I clued in.

Do I hear thundersticks for thunder thighs. Guess they would not be appreciated at the ballet.

I love the Pinocchio reference; very clever. As for ballet... simply gorgeous. It's bringing out a lot of emotion tonight... kids, dance recitals... you get the idea...

Congratulations on the job, Julia! What a lovely way to celebrate, and the poem is a wonderful way to convey the experience to others.

I haven't been to a ballet in YEARS - and I so enjoy them. When I was living in Bermuda, we had a cultural festival every winter thru the months of Jan and Feb. Acts would come from all over the world to perform for a few nights. Incredibly, I saw some of the most amazing performances on that small stage.
Nat'l Ballet of Canada sent some amazing dancers to perform a show of pas de deux (how do you pluralize that??) - my fave was from Romeo and Juliet.
And we had a troope from the Bolshoi (sorry - I have no idea if I'm spelling this correctly!) back in the early 90's with beautiful, though tattered, costumes. I remember thinking that since the fall of communism, those poor dancers aren't getting the governmnet dollars for new outfits. :(

Julia, your poem is so lovely and uplifting like the ballet! Thank sfor sharing your poetry...

Wait - do you mean they put you on permanent??

Beautiful. Your passion shines in the poem and entire post. (Tchaikovsky is my favorite composer) Thumper's mom would be proud of you - the crickets performed on cue nicely. ;)

seeing a ballet performance is still one of the huge gaping holes in my cultural education. I've long wanted to. I'll have to put 'Bluebird' on the list.

I saw a DVD of Swan Lake in the library catalog once but haven't sent for it yet. is viewing a ballet on the screen better than never viewing on at all? Actually, I'd probably be able to see more of it that way but I imagine there is a big difference in the experience of it.

your poem certainly does express the joy of the experience for you.

Joy Renee - seeing a ballet on DVD is definitely a more muted experience than live. You can't feel the charisma of the performers in the same way as in the theatre. You can't hear the feet landing on the stage, or the rustle of the skirts, or hear the heavy breathing when it's an exhausting piece to dance. But DVD is not something to avoid - no! I'd borrow it.

Thanks for sharing your poem Julia, it's beautiful. :)

hehe, I loved the Pinnochio reference, too. Huge congratulatory hugs -- I'm so happy for you!

What what a beautiful poem. And the Bluebird in the video is absolutely amazing!

How completely fun! I'm so glad you give yourself this treat!

congrats on the job!

looking for work is going to be the next series of posts on my blog...

i loved the intro to your piece and thanks for finding the awesome you tube!

the poem itself was lovely as well

Woo for your son, Artpredator! I love ballet men - we need more of them.