Today I was over the moon when I sat down to watch a documentary air on CBC's Land and Sea. The producer and writer of the documentary is none other than my cousin Julianne MacLean's husband, Stephen MacLean.

Here's the write-up for the episode:

The sinking of Titanic is probably the most famous marine disaster in the world. Fifteen hundred people lost their lives when the majestic ocean liner struck an iceberg. One body recovered from the frigid waters became a symbol of the tragedy and the horrible loss of life. It was a young boy, a baby really, less than two years old. He was called the Unknown Child because he could not be identified.

The Unknown Child was buried in Halifax with other Titanic victims and only now has the mystery been solved.

Modern science has made it possible to prove who the Unknown Child was. He now has a family and a name. - CBC.ca, Titanic Child

For my latest effort in my found poetry series, I've crafted a poem from several sources, telling the story of one of the tiniest of Titanic's victims. The sources include Lardner heads grisly task after Titanic disaster, Maritime Museum of the Atlantic, The Search For the Dead, and Tracing the Tribe: The Jewish Genealogy Blog. 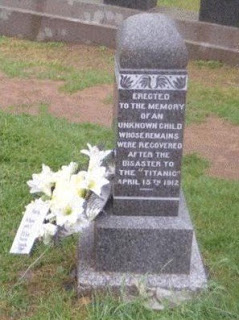 Having grown up in Halifax, the last resting place for many of the Titanic victims, I can say the shock never wears off as you approach the grave of the Unknown Child and see the continuous gifts, toys and flowers laid at the base of this granite marker. 97 years later, locals and visitors alike stop at the grave and pay their respects to this baby lost to the sea. 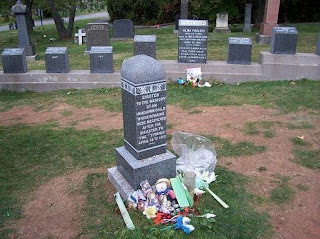 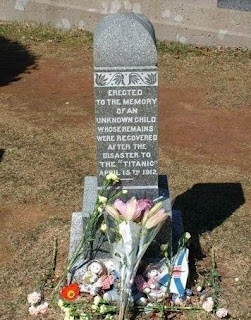 
The MacKay-Bennett
Commissioned with a grisly role
Her task
To retrieve as many bodies of the
1,517 passengers who perished
Before the Gulf stream
Swept them away

Captain Frederick Harold Lardner
His crew
Double wages. Captain gave his crew
The chance to sign off
Without penalty
No one took advantage

His entry in the ledger
Simply stated: "No identification. No effects."

The Halifax Police
And two detectives boarded the
Body-recovery Mackay Bennett at the
Harbour entrance
Securing it. They docked
At the Naval Dockyard
Protected by the just-created Canadian navy
By a large contingent of the Dominion Police
Forerunners of the Royal Canadian Mounted Police
Brought in from Ottawa 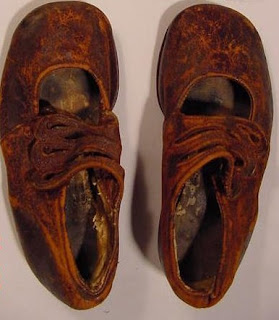 The burials began
On Friday, May 3rd, 1912
At all three cemeteries
As sad as all of these funerals were
No amount of mourning could
Surpass the following day

Saturday was the day
The funeral of the unidentified
Little boy found
By the Mackay-Bennett's crew
Hundreds of mourners
From Halifax and surrounding area
Packed St. George's Anglican Church
To pay their last respects to this
Little unknown victim

The young boy was laid to rest
With the other casualties
From Titanic. His tombstone
Made of granite
Bears the inscription:

"Erected to the memory of an
Unknown child
Whose remains were recovered
After the disaster to the Titanic,
April 15th, 1912"

In the years following the
Retrieval
The Mackay-Bennett's crew would
Reveal many stories of those
Horrifying days in the North Atlantic. However
There was one victim
The crew
Even years after the
Incident
Had a difficult time
Talking
About

"I remember standing there
Having a very spiritual feeling.
I wished my grandmother was there."

In 2002, the child was
Erroneously identified
As 13-month-old Eino Panula
Based on ambiguous
DNA analysis
Forensic odontology
On several teeth
Found
In the grave in 2000

"I had to go up the family tree
And down the tree," she said.
A third test showed
A mutation in the
Maternal DNA 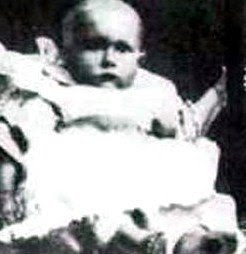 I watched the documentary yesterday and it was very moving. I'm glad they figured out who the child was, but my heart also went out to the family of the other child, especially after they were told it wasn't their ancestor after all.

Btw, CBC has a link to it on their site, for those who'd like to see it.

Yes, just click on the link I have to 'Titanic Child' and it takes you right to the episode.

Great post Julia. I love the Titanic stuff. Its always so intriging and sad. I wish I had known about the documentary.

really really informative post. and the poem about the passengers is really an eye-opening. i really feel sad about the 2 yr old child.

but nature is still powerful than us...

There is just something so chilling to the Titanic story...and amazing about the child, finally being able to rest.

Such a wonderful post, but I must say that the photo of the shoes just stopped me in my tracks...forced me to reread your poem...which was a good thing, in the end! ;)

Heart-rending. I remember watching the movie version of Walter Lord's "A Night to Remember." Gripping and horrifying. If that had been my child, I would want to die, too.

Your work is wonderful.

Shouldn't have read it. I'm too hormonal to think of a baby dying. *sniff*

This sounds like a great documentary - I'm going to check out CBC for the link.

I've always had a fascination with the Titanic story!

Just fascinating! I couldn't stop reading. There is so much we don't know abuot that tragic event. This brought a lump to my throat.

Very informative post, enjoyed reading this right down to the conclusion!

We all know about the Titanic - We dont't know all about it. Now I know a lot more. Thanks.

Very docu-poetic. I enjoyed reading it. I'll definitely follow the link to that episode.

I watch most documentaries I come across about Titanic. I can't really say why. It's such a compelling story.

I'll be on the watch for this one.

what a fascinating piece! the titanic has always interested me greatly. i read a memoir by violet jessop, a survivor. it's a great read!

Lovely poem, Julia - and I always think of your dad when I drive by the Titanic cemetary. I look over and wonder what he's up to :)

What an informative post...I never knew of the Unknown Child. Thanks so much for sharing this fascinating information. It was very touching to read!

Wow! I just read your entire poem, it was really moving. It took me months to research these points you hit on so perfectly. Thanks for your interest in the Unknown Child and our doc.