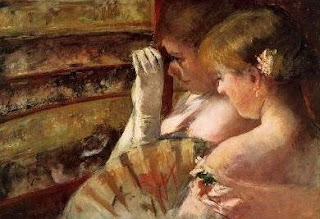 Welcome to the second posting of my new arts feature, Through the Opera Glasses. Today I have a review for the HD broadcast of La Fille Mal Gardee, a comic ballet performed by the Royal Ballet of England and shown at select Empire Cinemas across Canada, for one matinee only.

I am eternally grateful to Empire Theatres for starting this program. Having had the pinch-me-am-I-dreaming pleasure of working at a performing arts theatre in Toronto for eight years, I miss the access I once had to world-class ballet and opera.

And since I am a confessed ballet freak, it was a very, very long eight years after I left that job until Empire Theatres offered this fine arts program. 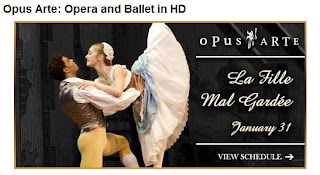 My mom remembered seeing La Fille Mal Gardee on one of her trips to see my sister and me when we lived in Toronto, so she joined me this past Saturday for the matinee. The ballet tells the story of young lovers Lise and Colas, who determine to outwit her mother. She plans to marry her daughter to the son of the local vinyard owner, but the townsfolk conspire with the lovers to ensure that true happiness wins out over a financial match.

Colas is danced by Cuban sensation Carlos Acosta. In the dance world, national companies are filled with residents from all over the world. Exquisite talent does not recognize borders. The particular style of each company attracts specific dancers who embody that style, and Carlos Acosta's magnificent technique fits beautifully into England's Royal Ballet Company.

Here's a variation from Act I that showcases his breathtaking virility, height and flawless technique.

The theme of 'ties' abounds in Sir Frederick Ashton's charming choreography. Ribbons are used to great effect to join the many relationships in this rural setting: family ties, romantic ties and the ties of the townsfolk to one another.

In the first act pas de deux (or dance for two, one of the main choreographic forms used in ballet,) Lise and Colas entwine themselves in the ribbon she left for him as a love token. They end up creating a cat's cradle after several intricate steps.

Osbert Lancaster’s original 1960 designs echoed the ties theme, mirroring the crisscrosses of the cat's cradle by having front-lacing bodices for Lise in all three costumes. The windows of Lise's home also have an X design, and the townsfolk gather in Act II to form a maypole dance.

Here's the first act pas de deux with the lovers delighting in their irresistable connection to one another.

Lise is danced by Argentinian marvel Marianela Nunez. She has a lively, flirtatious rapport with Carlos Acosta, and matches his bravura dancing with strength and fireworks of her own. Yet she never loses a delicacy that is somehow never at odds with her power.

She absolutely shines in this wedding pas de deux from Act III.

If you live in or near one of these Canadian cities, I invite you to join me later this month for Manon:

Painting - In the Box - Mary Cassatt

Kim at Sophisticated Dorkiness has suggested the following change-ups for those of us participating in her year-long challenge:

"1 - A Link Post - share a series of links your readers might find interesting * Here's a list of sites I frequent on the web. *
2 - A Short Post - less than 200 words * This redirect post pointing the way to my missmakeamovie post clocks in at 19 words. *
3 - A List Post - simple as it sounds, a list of some sort * My list of tins pictures for Dorte H fits this one. *
* A second list post: My Favorite Female Film Characters From the Past Ten Years *
4 - An Opinion Post - take an event, news, or another blog post and share your opinion on it
5 - A Poll or Question Post - post a poll or ask your readers a specific question for feedback
6 - A How-To Post - You’re an expert in something; big or small, share how to do it
7 - A Long Post - more than 700 words
8 - A Review Post - self-explanatory, I think. * Scroll back up to the top of this post for a review of the HD broadcast of the ballet La Fille Mal Gardee at Empire Theatres across Canada, this past Jan. 31st. *
9 - A Definition Post - show your expertise about a topic related to your blog
10 - FREE SPACE - a type of post of your choice (that is not the same as one of the previous posts)" * My Second Blogiversary post is a once-a-year extravaganza, so I'll count that as my free space. *

We've got a two-week time frame to give these posts a try. The gauntlet has been thrown. I shall meet you at dawn.

I think the BIP assignment is going to fun and challenging.

That was beautiful Julia. Very well done as well.

What a beautiful and aeschetic post, Julia!
You told me some days ago that you collect tins, and if I understood you correctly, you agreed to let me ´borrow´ some photos for my "Bait in the Box" posts.
Other kind people have also helped me so there is no rush, but I really would appreciate it if you also posted some of yours. Perhaps they could do for one of your Bingo-posts?

Dorte H - that's a great idea. I was planning to do them for a Thursday Thoughts, but I've got several book reviews coming up for those, so I'll be sure to post the pictures on Friday.

Wow, that guy has serious leg strength. Impressive! Julia, I didn't actually tag you because I wasnt sure if you'd do the meme, it might be too x rated, but if you would like to do it, please do, and I will add your name to the tag list.

Oh how I wish I could drop by here and say that I love ballet. I can't. Its not that I hate ballet or anything, but I have never watched any and have never been much into dance in general. It is probably a fault of mine. In any case your post made for interesting and well thought about reading and I really enjoyed that. And I am also looking forward to read your BIP-posts the coming weeks.